This article is over 19 years, 2 months old
Although Britain hosts just 2 percent of the world's refugees - 0.3 percent of its population - the asylum debate is imbued with a dangerous hysteria.
By Fran Cetti
Downloading PDF. Please wait...
Sunday 01 June 2003

The ‘Sun’ describes asylum seekers as ‘a sea of humanity polluted with disease’ and the ‘Mail’ writes that Britain is ‘a haven for Albanian gangsters, Kosovan people smugglers and Algerian terrorists’. The tabloid articles, however, represent the poison stirred up by the deeper currents of government policy. In a recent interview cabinet minister Peter Hain wove terrorism, drugs smuggling and asylum into a single soundbite, paving the way for remarks by one of Britain’s most senior police officers. Chris Fox mirrored Hain with talk of ‘a tidal wave’ of refugees acting as ‘a vehicle for drugs, prostitution and coerced labour’ and ‘a camouflage’ for criminal gangs and terrorists who inhabit ‘the murky underworld of asylum seekers’.

The rhetoric may be increasingly demented, but it fits with US neoconservative ideas of ‘rogue states’ and the threat of Islamic fundamentalism. The British government is redefining the issue of asylum as a threat to international stability and national security, justifying a relentless battle against those seeking sanctuary. Lip-service to protection of ‘genuine’ asylum seekers through ‘firm but fair’ asylum laws is fading fast, with the government explicitly linking moves against ‘illegal’ migration to the fight against transnational organised crime.

The government itself has played a crucial role in creating the ‘people-smuggling industry’. It has blocked any opportunity to seek asylum through legal channels. Those forced to take the smuggled route are then condemned as ‘economic migrants’, despite a wealth of research that invalidates this claim, including a recent Institute for Public Policy Research report showing that the vast majority flee not poverty but violence, oppression and conflict. The UNHCR estimates that up to two thirds of those smuggled are refugees. The largest group to make the perilous journey to Britain last year, for example, came from Iraq. But refugees are categorised as ‘illegal’ because they are smuggled in with false documents, and because they are ‘illegal’ they are criminalised, and can be detained and deported.

The 1951 Refugee Convention rules that refugees cannot be returned to the countries they have fled until they have had a full review of their asylum claim. But this last shred of protection is already unravelling. In the Balkan states they pass through, the fate of those seeking asylum further west is routinely decided with scant respect for international law. The region has been singled out by the EU for deployment of a vast array of intelligence, surveillance and policing measures, transforming it into Fortress Europe’s buffer zone.

The government claims that national security justifies the use of extraordinary measures without democratic scrutiny. In Britain this includes the detention without trial of foreign nationals ‘suspected of terrorism’ – 15 are now in British jails and some have been held for more than 18 months. In Europe, Interpol, its offshoot Europol, and the fingerprint-sharing system Eurodac are now at the forefront of tracking down ‘illegal’ migrants.

But in the Balkans the refugee is bereft of legal identity and liable to be detained for long periods and/or deported through a series of readmission agreements with neighbouring states. The government now defines these ‘transit’ states as ‘safe third countries’ to which those denied the opportunity to claim asylum in the west can be returned, yet most of these countries have no guaranteed access to asylum procedures. In Bosnia, for example, the UNHCR believes most asylum seekers are immediately deported.

The government is now preparing the ground for a further offensive, designed to shift the ‘problem’ beyond the borders of western Europe. In a plan it is presenting to the European summit this month, the majority of refugees will lose the right to claim asylum from within western Europe, and will, in the short term, be deported to ‘transit processing centres’ just outside the EU. In the longer term, the government proposes they should be corralled into ‘regional protection areas’ close to their countries of origin, where their claims will be processed and some may be accepted into Europe on a quota basis. If the refugee camps set up in the Great Lakes region of Africa after the Rwandan genocide are anything to go by, these ‘protection areas’ will be little more than ghettos of violence and squalor in some of the world’s poorest regions.

Ever-tightening security controls are increasing the costs of smuggling and heightening the risk of death en route. The often traumatic journeys refugees are forced to make are themselves an abuse of human rights, compounding the effect of the horrors many have suffered. Not only is the government complicit in this abuse, it is guilty of returning refugees to persecution and violence. But, as one minister has said ‘off the record’, the government is determined to see ‘the death of the notion of the asylum seeker in the UK’. 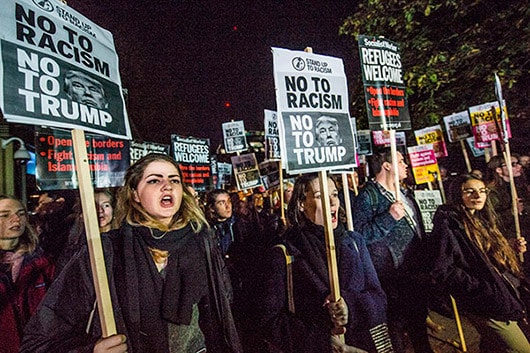 A journey on the railroad

No to immigration controls