This article is over 13 years, 1 months old
Ali Hassan and Gul Pasand of International Socialists Pakistan visited the Jalala refugee camp near Peshawar and found a mood to organise against the military assault.
By Ali HassanGul Pasand
Downloading PDF. Please wait...
Wednesday 01 July 2009

Most people living in the camps come from the Swat and Buner districts of the North-West Frontier Province. They are very poor and know nobody in the cities. They are peasant workers, very small landholders and associated with lowly professions. However, they are angry to be described as beggars. One, Nisbat Khan, said, “Look at our conditions. This place is filthy and full of insects and other harmful creatures. I found a poisonous snake and killed it and when I showed it to a policeman he said, ‘You haven’t killed a Taliban! Why are you so proud of your catch?'”

A young girl was shadowing us from camp to camp. When we asked her about her story it made both of us cry. Her mother and father were killed by bombs from the military. Shaista is 12 years old and came from Swat. Now she just wanders around in the camps; she has nobody left.

People have the harshest words to say about aid relief. Jalal Khan, a middle-aged father of five, said, “The government gave us nothing. State officials come, take names, addresses, numbers and go back – we get nothing. This has happened many times. Relief is mere propaganda.”

The universal opinion among the hundreds we’ve met is that the Taliban had done nothing harmful. Generally people acknowledge that the military operation is due to the presence of Taliban, but everyone blames their forced migration on the indiscriminate bombing by the Pakistani military.

Baghdada Khan, a schoolteacher, told us, “Look at the wire around my camp; my wife’s clothes are hanging over there. This is utterly shameful for me and it is all due to the military – they bombed our area day and night. The children were the worst affected. They cannot bear the horrific sounds of explosions and cry for hours out of fear. I migrated because I cannot bear seeing people killed in my neighbourhood and my children crying and I’m not able to do anything.”

Children are also the worst affected in the camps. There is dirty water, widespread disease and almost no sanitation. There is no medicine or medical help.

In the Jalala camp they start distributing lunch at 1pm but there is a queue of thousands from 10am. One woman said, “I have been feeding my kids with boiled leaves for the past six days.”

At first refugees were reluctant to talk. But when we told them that we were not from any NGOs or state organisation and our purpose was to stop the military operation the response was tremendous. When we showed them the work of Jang Mukhalif Committee Karachi (Anti-War Committee Karachi), and propaganda material of the International Socialists, the migrants genuinely welcomed our campaign.

When asked if they would help launch a struggle against the military operation people were very forthcoming. They offered all kinds of support and gave their contact numbers.

One of the angry young men was Shahroze. He said, “Whenever you call us we will come with you, stage sit-ins and whatever is possible because protest is absolutely necessary if we are to get out of these camps and go back home.”

When we put up an International Socialists poster denouncing the military operation and the attacks on Pashtuns, people started kissing it. There was great jubilation and one man came forward and said, “If anyone touches this poster I will take him to task.”

There were many volunteers who came forward to distribute the anti-war leaflets. People took us around and showed us the horrible conditions. They also gave us phone numbers of other activists and leading people in the camps who will help coordinate anti-war efforts.

In Peshawar and Mardan we met many people of the left. However, on the question of the war and military operations we found them confused and ready to oppose one another rather than form a joint platform against the military operation. Some say that those associated with the Pakistan Peoples Party (PPP) cannot be part of an alliance against war because the PPP is waging the war. Some intellectuals generally identified with the left openly support the military operation. Activists of the left are often inactive because of such differences and confusion.

We came to the conclusion that, instead of trying to convince people who are not ready to act, we should move around in the camp and meet people and organise them in order to mobilise resistance, and hope that in the process others may join. We have found many young and angry people who want to resist the military operation.

Bakht Khan, an outspoken young man, said, “We will join the preparations for a big demonstration and will bring women as well.” Considering traditions this is a big step forward but Bakht said this was necessary because “if our women are forced to live in these hot and humid camps then why can’t we stage a sit-in on the roads? What is the difference? This war is not going to end if we are to keep sitting tight in the camps”.

After three days of meeting hundreds of refugees and activists in Peshawar and Mardan, an 18-member committee has been formed. People won’t accept the horrific conditions of camp life. They are going to resist and the most important thing right now is to mobilise as many activists as possible. We will now visit other camps, interview people, spread the message about our campaign and announce a demonstration through a press conference.

There is a profound belief among the refugees that “resistance can work”. 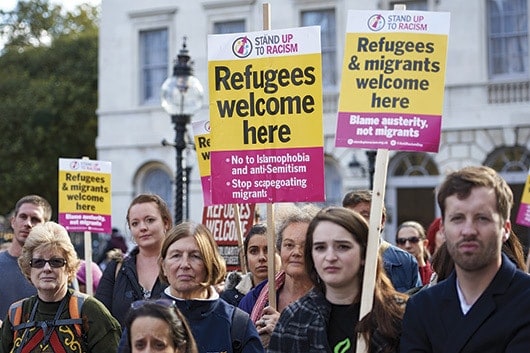