Russia: The Theatre of War

This article is over 19 years, 2 months old
The brutal storming of a Moscow theatre by Russian forces last month led to the deaths of 117 hostages and all 50 hostage takers.
By Nicolai Gentchev
Downloading PDF. Please wait...
Saturday 09 November 2002

At least 113 of the hostages were killed, not by gunshot wounds, but by the deadly poison gas the Russian forces pumped into the theatre. The symptoms of the survivors led scientists such as Professor Steven Rose to conclude that the gas used was a variant of the nerve gas BZ developed by the US military in the 1970s. Some have since argued that the gas may have been a derivative of heroin. Whatever it was, the Russian authorities refused to disclose what gas was used, even to the doctors treating the victims, citing reasons of national security. There is a parallel here with the way that President Putin handled the sinking of the Kursk nuclear submarine. Then, he refused offers from foreign ships which were close to where the Kursk had exploded that had equipment that might have been able to save the lives of some of the sailors. In both cases, Russian military pride and secrecy were judged more important than the lives of its sailors or civilians.

We were told that the end of the Cold War would bring a new period of peace and reduced military spending. Instead we have had a series of wars, moving from the Gulf to Yugoslavia to Afghanistan and now probably to Iraq. The ‘war on terror’ that George W Bush declared following 11 September is just the latest intensification of this period of world instability. After the deaths in Moscow and also in Bali, it seems that the ‘war on terror’ will be fought also in capital cities both east and west, and that going to a nightclub or theatre can be a deadly activity.

The use of poison gas in Moscow points to another aspect of the hypocrisy of the world’s rulers. Although Blair and Bush talk of Iraq’s ‘weapons of mass destruction’, the vast bulk of chemical and nerve agents are held by the US and Russia. The US remains the only country to have used nuclear weapons in wartime, against Hiroshima and Nagasaki. We can imagine the outcry there would have been if Saddam Hussein had used nerve gas to storm a siege inside Iraq. Yet after last month’s events in Moscow, Tony Blair was one of the first world leaders to telephone Putin and congratulate him on the ending of the siege. The US and Britain need Russian support on the UN Security Council for any resolution allowing them to go to war against Iraq. This contrasts with the feelings of many Russians, traumatised by the number of deaths caused by their own side in the Moscow theatre.

When Putin ordered the storming of the theatre, he knew he would face questions about the way the operation was carried out. But he hoped that the question of Russia’s brutal war in Chechnya would stay off the news agenda. In fact, disregard for loss of life runs through the history of Russia’s policy on Chechnya.

The Chechens’ history of brutal national oppression and desire for independence are important to understanding what would drive someone to take a theatre full of people hostage. In February 1944, Stalin had deported the whole of the Chechen population–some half a million people–in freight trains to Central Asia, on the pretext that there had been collaboration with the invading Nazi armies. One quarter of the Chechens died either in transit or from hunger and cold within the first 5 years. Chechen gravestones were used to pave the streets of the towns now repopulated by ethnic Russians. After Stalin’s death, the Chechens were allowed to return, but even today older Chechens have direct experience of these atrocities.

Given this history, it is not surprising that when the Soviet Union fell apart in 1991, Chechnya seized the chance to declare its independence. But Yeltsin, and his successor Putin, would not entertain the idea that a part of the Russian Federation could choose to secede–under the old Soviet constitution Chechnya had been a republic within Russia’s borders. Add to this the country’s strategic position in relation to pipeline routes for Caspian Sea oil reserves, and the desire of local people for self determination has carried no weight in Moscow.

In both 1994 and 1999 Russia invaded Chechnya, each time inflicting massive civilian casualties. It is estimated that up to 100,000 people (the bulk of them civilians) were killed in the first invasion, which ended in failure in 1996. The total Chechen population of the time was under 1 million. Ethnic Russian inhabitants of the Chechen capital of Grozny were bombed alongside their Chechen neighbours. Official Russian government statements still refuse to use the word ‘war’ to describe this, referring instead to ‘an anti-terrorist operation’. Even though this war is not officially going on, the deaths continue.

At the time of the invasions of Chechnya, western politicians made formal complaints about human rights abuses and the indiscriminate bombing of cities. But since the attacks of 11 September, western policy has changed and even these formal protests have been dropped. In return for Putin’s support for the ‘war on terror’, he has been given free reign. The fact that Chechnya is a Muslim country and that Islamist ideas have spread among the population made this shift in western policy even easier.

The Chechen tactic of attacks on Russian cities flows out of the conduct of Russia’s war. Just as in Yugoslavia and Afghanistan, the Russian assault started with a prolonged aerial bombardment. As they watched their cities being razed to the ground, the Chechen fighters saw that Russia had an overwhelming conventional military advantage. One response was to strike back inside Russia’s borders and also to target civilians. In June 1995, during the first Russian invasion, Chechen guerrillas captured a hospital in the Russian town of Budyonnovsk, taking 1,200 hostages. Four days later Russian special forces attempted to storm the hospital, killing nearly 70 hostages. But the Chechens fought back and the Russian troops were unable to capture the hospital. The botched Russian operation was a public relations disaster for Yeltsin’s administration which decided to make a humiliating climb down. A ceasefire was declared in Chechnya and the Chechens who had taken the hospital released their hostages and were given safe passage out of Russia.

During the siege of the Moscow theatre, there were small but significant demonstrations in Moscow calling for independence for Chechnya. Putin’s response was a ban on protests. During earlier phases of the war, mothers of Russian conscript soldiers have been at the forefront in demanding a Russian withdrawal.

This time round Putin’s government, bolstered by western support for its war in Chechnya, dismissed out of hand the idea of a ceasefire and negotiations. But until Russia grants this demand, last month’s events in Moscow are unlikely to be the final chapter in this tragic history.

Kyrgyzstan: at the impasse of imperialism 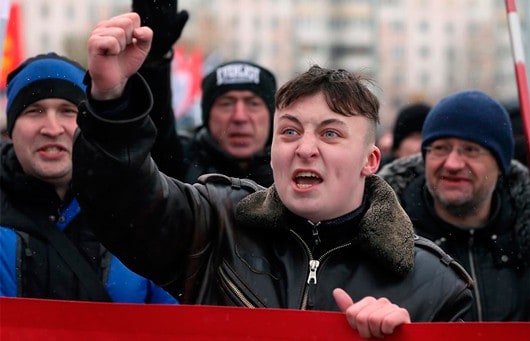 Trouble ahead in Putin’s Russia?