Samir Amin, who died in August, was a leading Marxist thinker in the Global South. Unlike many of his contemporaries he did not retreat from radicalism with the collapse of the “communist” east. In the period since the millennium he threw himself into the World Social Forum.

Amin was born in Egypt in 1931, to an Egyptian father and a French mother. His parents were both doctors. He went to university in Paris in the 1950s. He returned to Egypt as a member of the Communist Party during the excitement and ferment of radical nationalist Gamal Abdel Nasser’s rule.

He worked as a public sector research officer, hoping to be part of a radical change that did not come. The communists criticised Nasser for halting at simple national liberation. Amin complained, “We were not supported by the Soviet Union at that point. For diplomatic reasons, they wanted to support Nasser, and did not want to have an independent communist party.”

Amin was part of a minority that rejected this. It was anger at the compromise that led him to move to the West African state of Mali. His politics shifted towards China and Maoism.

In the 1960s revolutionaries in Africa were at the forefront in throwing off colonial regimes and looking to a socialist alternative. New governments in Algeria and Ghana inspired rebels around the world. Alongside guerrillas in Asia and Latin America, Africa seemed a beacon of hope for radical change in the world.

This was the start of a long period that saw Amin working as a radical economist, looking at solutions for national development for leftist countries in the Global South.

In the 1970s Amin coined the term Eurocentrism. His use of the term, however, was far more precise and capitalism-related than that of many later writers. He said that many ideas had developed in Europe, and to examine them is not in itself Eurocentric. The problem was the idea that Europe was inherently superior, a notion developed among the European elite from the 18th century.

He also developed the theory of unequal exchange, most clearly in his book Accumulation On A World Scale, to explain the continued dominance of the West over the emerging nations of the Global South. He argued that modern imperialism was largely about the West dominating the Global South, and he looked to methods of national development and international cooperation that could get around this.

Writers such as Chris Harman have shown that this was a mistaken view of imperialism. Often the “developed” countries made more profit investing in each other and saw poorer countries, particularly in Africa, as an irrelevance. There is no path of national development that can avoid this.

His key theory may be mistaken, but Amin recalls a time when the capitalist system was under sustained attack — including an intellectual attack that saw the vital importance of developing a systematic understanding of capitalism in order to destroy it.

Second, Amin did not abandon radical ideas with the collapse of the Stalinist states. Instead he enthusiastically became a key organiser in the World Social Forum and the international anti-capitalist movement that emerged in the early 2000s.

In 2010 Amin called for a renewal of “creative Marxism”, adding that “Marx has never been so useful or necessary in order to understand and transform the world… Being Marxist in this spirit is to begin with Marx and not to stop with him, or Lenin or Mao.”

Elsewhere he argued, “The future starts today. We cannot wait until the system has led to a gigantic war and ecological catastrophe to react. We have to react now.” 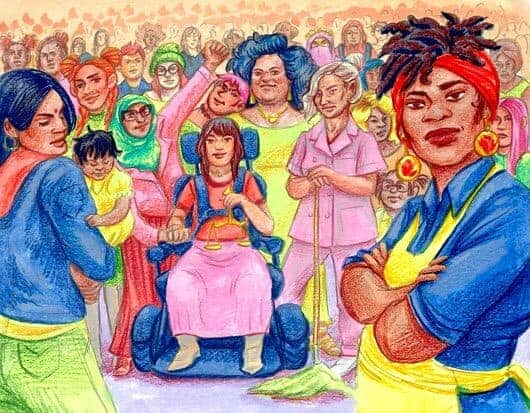 Time's up for unequal pay