Seamus Heaney was born in County Derry in 1939. He was perhaps the finest lyrical poet of his generation and was awarded the Nobel Prize for Literature in 1995. He grew up in the deeply divided landscape of Northern Ireland where “the lines of sectarian antagonism and affiliation followed the boundaries of the land”. He lived through the demise of the ancient rural world into which he was born, and the emergence of a globalised modern Ireland.

The world of his childhood to which he returned so often in his poetry had not changed in generations: horse-drawn ploughs, thatched roofs, and the hammer ringing on the blacksmith’s anvil. He could have continued to live imaginatively in that world as a purveyor of nostalgic metaphors for an Ireland long gone. Instead he worked to make his poetry contemporary.

He turned dry cliches into questioning eloquence; the dull metal of age-old metaphors into words that sparkled with possibility. His work was a door into the dark that had almost overwhelmed us; as he reminded us in a speech just before he died, “We are not simply a credit rating or an economy but a history and a culture, a human population rather than a statistical phenomenon.”

Few writers have done so much to make us feel like inheritors of an ancient imagination rather than figments or puppets of the market.

He struggled with contradictions, paradoxes, and conflicting impulses. But he was never afraid to face those contradictions – because he understood more than most that this is how we arrive at an understanding of the complex world in which we live. Almost 200 years ago Shelley, in his Defence of Poetry, explored the effect of poetry on society in troubled times and suggested that poets are “the unacknowledged legislators of the world”.

This was a challenge that Heaney and his contemporaries accepted, and may explain why some of the best poetry in the English language over the past 50 years has emerged from the political turmoil of Northern Ireland. Seamus Heaney, Tom Paulin, Michael Longley and Paul Muldoon did not write as a movement, or in the same style, but as a group they reflected the convulsions of their time and place. Heaney’s poems do not stand or fall on the themes of justice or oppression, but such themes are worthy of the wonderful lyrics in which he frames them.

Heaney, particularly in his early poems, speaks about and for those whose voices are lost to history. The image of his cousin Colum McCartney, murdered in a sectarian attack, haunted him: “blood and roadside muck in your hair and eyes”.

Great poets speak for themselves but they also create a space where other voices can find expression. Heaney never wrote to a political agenda or allowed his work to be appropriated for any purpose. He gave each side of a political or personal equation its full weight and proper due without becoming a prisoner of either.

He was not, in that sense, a national poet. He knew too much about the dangers of tribalism and the foolishness of slogans to ever want to be a spokesperson for the movement. This stance was to be tested during the dark days of the Troubles in Ireland when an IRA sympathiser’s demand for political commitment was refused by Heaney:

For fuck’s sake, are you going to write/Something for us?/If I do write something,/Whatever it is, I’ll be writing for myself.

Despite this he was deeply rooted in the community and people of Northern Ireland. He also refused in 1982 to allow his work to be published in the The Penguin Book of Contemporary British Poetry:

With the outbreak of the Troubles in the late 1960s, the problems of poetry moved from being simply a matter of writing a satisfactory line or lyric to being a search for images and symbols adequate to his community’s predicament. He set out his own values in an essay in 1988:

“In one sense the efficacy of poetry is nil – no lyric ever stopped a tank. In another sense, it is unlimited. It is like the writing in the sand in the face of which accusers and accused are left speechless and renewed.”

The distinctiveness of his poetry is unmistakable: Heaney’s poetry carries its maker’s mark on every page. So is the immense effort that went into the deceptive simplicity of his early work. That this was often done by implication made it no less effective, and at times shocking. Seamus Heaney will be missed because he showed what poetry is capable of. His poetry is simple, readable and accessible – yet every word carries meaning below the surface. 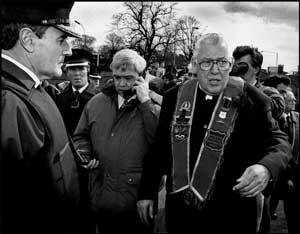