It’s hard to believe that I and 500 others saw his last ever show in Liverpool last November. Joe and The Clash politicised thousands, from their Rock Against Racism gigs onwards. Joe helped to instil anti-war, anti-fascist and anti-imperialist values that have stayed with my generation. He also made some of the most powerful, exciting music there’s been.

As a young London school kid standing up to the NF, The Clash and the Anti Nazi League (ANL) gave us the confidence to take them on. They aided black and white unity in a dynamic way. When the National Front tried to use The Clash’s epic ‘White Riot’ as a theme, Strummer immediately denounced the rats.

Strummer put his money where his mouth was–headlining a Rock Against Racism ‘Southall Kids Are Innocent’ benefit gig in the aftermath of Blair Peach’s murder in 1979. He eventually received some long overdue money from CBS–but many a music venue will testify to his finacial backing over the years. That support for the ANL also remained consistent–when the NF returned to Leicester in 2000 Strummer publicised the ANL’s attempt to oppose them.

His politics were those of the underdog–the firefighters’ fundraiser he did in November exemplifies that ethos of solidarity. The irony that the author of lines such as ‘All the power’s in the hands of the people rich enough to buy it’ had a two-page obituary in the Sun wouldn’t have been lost on him. No Murdoch poodle, he.

Joe’s spirit of resistance obviously resonates with some of today’s anti-capitalists. He was thrilled to hear that at the European Social Forum Clash and Mescalero songs constantly boomed out from one enormous sound system, ‘Working for the Clampdown’ and ‘Revolution Rock’ being particular favourites. There could be no better tribute.

Wrong to Back Chirac 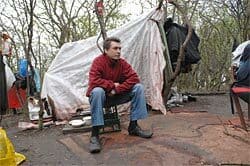