This article is over 6 years, 10 months old
Many socialists will consider joining Corbyn's party to defend him, but is it the right move for revolutionaries, asks Sally Campbell.
By Sally Campbell
Downloading PDF. Please wait...
Monday 28 September 2015

Shaun Doherty has outlined how important it is for socialists — even revolutionary ones — to back and defend Corbyn’s leadership of Labour. But if we’re so keen to help Corbyn hang onto his position, why don’t we just join the Labour Party? Surely that’s where the battle will take place and where Jeremy needs numbers of defenders against the right of the party?

This is not really a question of principle. Groups of revolutionary socialists have organised inside reformist parties, including the Labour Party, in the past and still do today. Many socialists will feel that, with genuine socialists at the helm, such as Corbyn and John McDonnell, Labour can be a place for them. They rightly identify Corbyn’s win as an expression of the phenomenon seen in Europe and beyond of new and sometimes surprising political forces coalescing around anti-austerity and anti-racist messages — from Syriza and Podemos to the SNP to Bernie Sanders’s US presidential bid.

Shaun has shown the kinds of pressures and attacks Corbyn is facing from inside the Parliamentary Labour Party — the place where he has least support. There will clearly also be a debate on the ground in Constituency Labour Party branches. Already there are examples of Labour activists’ meetings being called unofficially to bring together the new members who joined to support Corbyn and discuss what next. Clearly this new blood can breathe life into an organisation whose activist base haemorrhaged during the Blair years.

Many of these new members — and old ones who have rejoined or simply been rejuvenated — will be involved in the anti-austerity movement, perhaps through the People’s Assembly. They might have been on the “Refugees Welcome Here” demonstration when they heard Corbyn had won, or organised one of the impromptu protests after the Tories won in May.

In short, these are precious activists that revolutionaries should know and work with.

But there are important reasons, based on historical as well as very recent evidence, that we in the SWP don’t believe it would be right to join Labour. Firstly, the Labour Party as a project is geared towards winning elections in order to gain office and make changes through legislation. The pressure of electoralism isn’t simply about right wingers in the PLP sniping; it’s about success being measured only in votes and therefore anything that doesn’t appear to push the polling up is quickly dumped.

Another problem of focusing on parliament is the pressure to submit to the authority of the British state, with all its weird traditions (be it kneeling to the queen or the even more bizarre rituals that those such as Cameron engaged in at the British state’s training ground, Oxford University). Corbyn has already fallen foul of the press in this regard, for not singing the national anthem, not wearing a tie, and so on.

And this isn’t just pomp. A senior British army general effectively threatened a coup if Corbyn were to become prime minister and should seek to “downgrade Britain’s capabilities”, meaning if he should follow through on his promise to scrap Trident. And these aren’t mere ramblings — an actual plot was in place during Labour prime minister Harold Wilson’s term in office in 1968.

There is a big difference between the PLP and the membership of the party, but the PLP is the leadership of the party and has disproportionate influence. This means that Corbyn is in the tricky position of being leader without the backing of most of the PLP and with backing from a majority of members and supporters. He is having to appeal to the members over the heads of the PLP, while also trying to keep a shadow cabinet together. Only a movement from outside parliament can give him the strength to withstand the pressure and stick to his principles.

It is unclear so far how much support he has from the other leading force within the Labour Party, the trade union bureaucracy. Paul Kenny of the GMB, for example, has taken a “wait and see” position (a sterling example of leadership!).

The dominance of the PLP, conditioned to compromise with the state, and the union bureaucracy, bound by its mission to compromise between bosses and workers, means that the Labour Party, no matter how many brilliant socialists are members of it, is not a vehicle for profound social change.

As radical as Corbyn sounds compared to the rest of the establishment, his policies are actually fairly mainstream social democratic ones. Abandon austerity, renationalise the railways, build genuinely affordable homes — these are all things which a majority of people would agree with, including many mainstream economists. Corbyn would like to achieve these things through parliament and without fundamentally disrupting the functioning of capitalism.

But is this possible? Unfortunately, we have the recent example of Greece to suggest that it isn’t. When Alexis Tsipras and his Syriza government were elected on 25 January of this year it was a victory for the movement against austerity. The government immediately came under immense pressure from the institutions of European and international capital — the European Commission, the European Central Bank and the International Monetary Fund (known collectively as the “Troika”) — to accept violent austerity measures in order to pay back Greece’s debt to the Eurozone.

This eventually drove Tsipras to take it to the people in a referendum on whether to accept the forced austerity measures. Once again the movement on the streets of Greece gave people the confidence to vote Oxi (No) on 5 July. Yet just a week later Tsipras signed up to an even worse deal.

When this led to a crisis inside Syriza, with dozens of members breaking to the left, Tsipras once again called an election in late September. Syriza has won the election, but now on the basis of “responsibly” pushing through the demands of the Troika. Now the movement in the streets will need to oppose the government that initially represented them.

Fundamentally the problem was not that Tsipras was weak or right wing, or that challenging austerity wasn’t possible; it was that Syriza sought to take on austerity without challenging the institutions of European capitalism which were imposing it.

Our comrades in the Greek Socialist Workers Party (SEK) withstood the call over the last couple of years to join Syriza, arguing that the pressure of parliamentarism would distort even the leftest of reformists. Instead they have been part of the electoral coalition of the radical left, Antarsya, and rooted in the anti-austerity and anti-racist movements — both of which are much more developed and facing greater challenges than here in Britain.

They have maintained their political and organisational independence, while constantly working with others to fight austerity and the growth of the far right. This has meant that rather than being elated at Syriza’s victory and expecting them to deliver change for them, and then being demoralised and deflated at their capitulation, SEK comrades have fought consistently to strengthen the workers’ movement and show that another way is possible.

This is important, because revolutionaries should never be commentators. We don’t write these articles or hold meetings in order to draw clever sketches of parliamentary manoeuvrings. Neither do we simply cheerlead nice leaders, or wait, arms folded, for the “inevitable sell-out” and then say I told you so. We act.

Jeremy Corbyn was elected because tens of thousands of people saw in him an expression of something different — the idea that there is an alternative to neoliberalism and inequality. We can’t — and they can’t — wait for the next general election to make that happen.

The situation in Britain is nowhere near the level of crisis experienced in Greece, but the same forces are at play: the attempt to make workers and the poor pay for the economic crisis; the attempt to scapegoat migrants or refugees or Muslims for our problems. The job for socialists is to build the broadest and deepest possible united fronts over these symptoms of the system’s sickness — involving socialists, whether in or out of Labour, trade unionists, young activists, and so on.

We always seek to build on the best instincts in people — of solidarity, unity, strength in numbers. Corbyn’s victory helps us to do this.

The groundswell of solidarity with the refugees is fantastically important and every socialist should be going round their workplace or college or community collecting for the Stand Up to Racism day of action for refugees on 17 October. We should be taking round the Unite the Resistance statement to defend Corbyn and the policies he stands for and use this to build the People’s Assembly actions at the Tory conference, as well as the longer-term fight against the Tories’ Trade Union Bill.

Corbyn’s win has put socialists back in the news and in the political discourse. This helps us too — because we have a vision that goes beyond reforming capitalism to fundamentally transforming the basis of human relations. Costas Pittas in last month’s Socialist Review expressed this when he wrote about Grexit as a top-down policy some on the left of Syriza had been arguing for, and Grexit as an outcome of real workers’ power — something which is not an abstract question in Greece today. There is a world of difference between a reform passed in parliament and one seized through the collective power and imagination of the workers’ movement — as history has shown us, from Russia to Chile to Egypt.

Socialist Worker’s front page after Corbyn’s victory was “Seize the Time”. This is important: Corbyn’s victory isn’t just about what happens in parliament; it is a transformative moment in British politics. Just think back a few months to how demoralised many of us felt after the Tories won outright in May. Corbyn’s win, all the pressures and problems I’ve outlined notwithstanding, is a sign that change is possible. It helps convince people that it is worth fighting and that, perhaps, we can win. 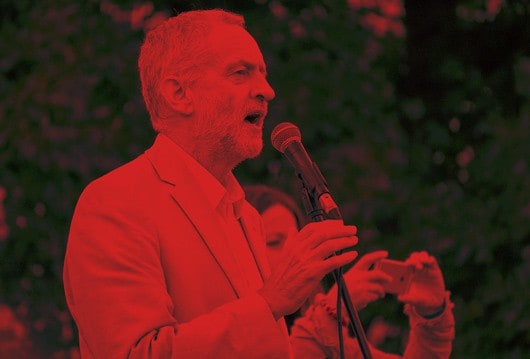 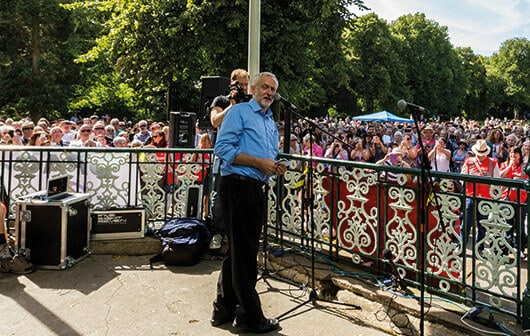 How do we best back Corbyn?

Faith of their Fathers

How about a life in politics?