This article is over 11 years, 3 months old
Sixty years ago the Socialist Review Group, forerunner of the International Socialists and later the Socialist Workers Party, was founded by a group of 21 people in a flat in Camden Road in London. Ian Birchall looks back at the struggles socialists faced then and their relevance for today.
By Ian Birchall
Downloading PDF. Please wait...
Friday 01 October 2010

Sixty years ago, on the weekend of 30 September to 1 October 1950, 21 people met in a flat at 866a Camden Road, London NW1, to form a new political group. It took its name from the publication it produced and became known as the Socialist Review Group (SRG). In 1962 it changed its name to the International Socialism Group and then, in 1977, to the Socialist Workers Party.

The new group was born out of the British Trotskyist movement. During the Second World War the small Trotskyist organisations had led strikes and their members were jailed under the wartime government and slandered by the Communist Party as “Hitler’s agents”. In 1944 the Trotskyist organisations united to form the Revolutionary Communist Party (RCP), with a membership of fewer than 400, perhaps 90 percent manual workers.

After the war they faced huge problems. They had inherited an analysis that had seemed to fit the pre-war world in 1939. Attacked on all sides, they had fiercely defended their political tradition. But in the post-war world defensiveness became a positive disadvantage. The RCP faced serious arguments. Was the world facing a massive economic crisis, or would reformism get a new lease of life? Should the RCP remain an open party, or would revolutionaries be better inside the Labour Party?

Then there was the question of Russia. Trotsky had argued that under Stalin Russia remained a “workers’ state”, albeit degenerated, which would be too fragile to survive the war. In fact Russia came out of the war strengthened, and set up a series of regimes in Eastern Europe that were politically and economically very similar to that in Russia. Were these workers’ states too? Or if they were still capitalist, how could Russia be different?

This debate drew in Ygael Gluckstein, a young Palestinian Jew who had arrived in Britain in September 1946 with a very temporary visa. He became known as Tony Cliff. Given the job of defending the orthodoxy, he came to the conclusion that Russia was a form of state capitalism. He wrote a huge internal document to prove this. By the time he had finished it he had been forced to leave Britain for Ireland.

The RCP was increasingly demoralised. It was said nine-tenths of its activity was producing internal documents. Membership fell and the most able leader, Jock Haston, dropped out. Leadership fell into the hands of Gerry Healy, a politically shallow bully. In 1949 the RCP was renamed “the Club” as its members entered the Labour Party.

In June 1950 the Korean War broke out – a struggle between the power blocs of US imperialism and Stalinism. It looked all too plausible that it could spread into a world war. The argument about state capitalism became more than a theoretical debate, raising the fundamental question of which side revolutionaries should take in the coming conflict.

For Healy this offered an opportunity to clear out his rivals. Supporters of the state capitalist position were rapidly expelled. At the conference of the Club in July 1950 delegates were shocked to hear the abusive language Healy directed against his opponents. When a Birmingham member, Percy Downey, moved a resolution at the trades council based on the state capitalist analysis, Healy appeared in person to demand his expulsion. When he failed, a second meeting was held at which all those who opposed Downey’s expulsion were themselves expelled.

It was not just the state capitalists who were thrown out. Ted Grant, one of the RCP’s main intellectuals (later a leader of Militant and Socialist Appeal), had written two pamphlets replying to Cliff’s arguments through rational debate, something of which Healy was incapable. Grant too was thrown out.

So on 30 September some of those expelled met to discuss where to go next. We have a list of initials of those who attended, though not all can be identified. The flat where the meeting was held was the home of Jean and Danny Tait. Danny had come from Palestine, where he belonged to the same small Trotskyist group as Cliff, working in semi-legal conditions. Jean became a stalwart of the SRG and remained active till the late 1960s, writing under the pseudonym Peter Mansell.

There were people at the meeting from London, Thames Valley, Birmingham, Crewe and Sheffield. Among those from London were Geoff and Renee Carlsson. Geoff was a leading shop steward and for a time convenor at the ENV gearbox factory in north west London, which for many years had an exemplary record of strong union organisation and good conditions.

From Thames Valley there were Anil Moonesinghe and his wife Jeanne Hoban. In the early 1950s they returned to Anil’s native Sri Lanka; in 1964 he became minister of communications when the Lanka Sama Samaja Party entered the government. Jeanne was a radical journalist in Sri Lanka and helped to organise plantation workers. In the 1970s she returned to England and was active in the Anti Nazi League.

From Crewe came Ray Challinor, a leading member of the SRG and International Socialists during the 1950s and 1960s, and later a distinguished labour historian. The strongest group was in Birmingham, and included Bill Ainsworth, Percy Downey, and Ken and Rhoda Tarbuck. Ken was an activist in various left organisations over five decades.

There was also a group in Manchester, which was unable to attend the meeting, but very loyally sent a telegram accepting all decisions. This included Duncan Hallas, who dropped out in the early 1950s, but rejoined the International Socialists in 1968 and for the next 30 years was one of the organisation’s finest speakers and writers.

Last, but not least, the attendance list included RT and CD. RT was “Roger Tennant”, one of the many pseudonyms of Cliff. Cliff did not have right of residence in Britain but was allowed to visit and he had been very active in the period of the split in the Club. His work on state capitalism provided a central theoretical orientation for the new group, and his driving energy was central to the organisation for the next 50 years. CD – C Dallas – was his wife and lifelong companion Chanie Rosenberg, who is still very much an active member of the SWP.

The total membership was 33. This was small but significant in comparison to the other fragments of the Trotskyist left. A letter from one of the members states that “the official group [i.e. Healy’s] now has 60”. A number of those initially involved soon disappeared, burnt out by the inward-looking disputes of the previous years. New recruits were won slowly, including two future Labour MPs, Stan Newens and Sid Bidwell.

Apart from the theory of state capitalism, the new group inherited most of the politics of traditional Trotskyism. An early statement declared it to be the “nucleus” of a “new Marxist party” which could “be built firmly ONLY on the acceptance of party discipline in the tradition of Bolshevism under Lenin’s leadership”. To begin with the group had a somewhat top-heavy structure, with both a national committee and a secretariat.

Comrades still expected a serious capitalist crisis, with a consequent upturn in struggle opening up revolutionary possibilities, in the relatively near future. Few could have expected that it would be a full ten years before the group’s membership reached three figures. There was a great deal of work ahead in rethinking Marxist and Trotskyist analyses to understand a changing world.

Of necessity the new group worked inside the Labour Party – not with any illusions that it could be captured for socialism but simply because it offered a milieu in which it was possible to meet and argue with other left wingers. Most of the members were young, and for a brief period a youth paper, Young Chartist, was produced for activity in the Labour Party youth organisation.

The founding meeting decided to apply for membership of the Fourth International (FI). However, this was largely a propaganda gesture – the letter sent stated forthrightly that the FI leadership was “bankrupt politically, capitulating to Stalinism and Titoism, lacking any consistent policy towards reformism, and showing all the signs of bureaucratic degeneration”. There were, however, contacts with groups which had developed versions of a state capitalist analysis in the US, France, among Ukrainian exiles and elsewhere. There were hopes of a regroupment of dissident tendencies in the FI, but little came of this.

The first issue of the new paper, Socialist Review, appeared in November 1950. Just 350 copies were produced, on a duplicator, in typewritten form. But the typewritten pages were justified. Nowadays justification merely requires a click on a computer. But with an old fashioned manual typewriter justification meant counting in advance the number of letters in each line and then adding the necessary number of spaces. Rhoda Tarbuck and Bill Ainsworth were determined that, modest though the journal might be, it should look as presentable as possible.

The most important item in the first issue was an article by “Roger Tennant” on “The Struggle of the Powers”. This applied the theory of state capitalism to the Cold War competition between Russia and the West, and gave a context for understanding the Korean War. Cliff argued, “The war in Korea serves the great powers as a rehearsal for their intended struggle for the redivision of the globe.” He concluded with a slogan borrowed from US comrades, “Neither Washington nor Moscow, but international socialism”.

There have been many ups and downs, many twists and turns over the last 60 years. But as we prepare to fight new battles, we should not forget the pioneers who made our organisation possible. After the revolution we shall put a red plaque on the wall of 866a Camden Road. 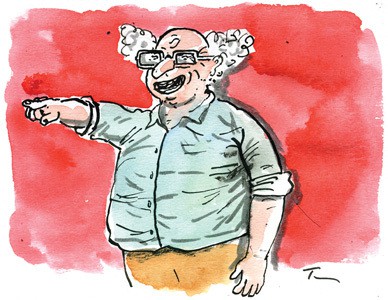 Why read State Capitalism in Russia?