This article is over 15 years, 1 months old
With climate change posing one of the gravest threats to capital accumulation - not to mention humankind and our environment - it is little wonder that economists such as Sir Nicholas Stern, establishment politicians like Gordon Brown and Al Gore, and financiers at the World Bank and the City of London have begun warning the public. They are all pushing for more market solutions as the way to reduce carbon dioxide emissions.
By Graham ErionPatrick BondRehana Dada
Downloading PDF. Please wait...
Friday 01 December 2006

This was the key theory motivating capitalist states’ support for the Kyoto Protocol. And since February 2005, when the protocol was ratified by Russia and formally came into effect, a great deal more money and propaganda has been invested in the carbon market, including at a major Nairobi climate conference last month.

Rather than forcing countries or firms to reduce their own greenhouse gas emissions, Kyoto Protocol designers created a carbon market – from thin air – and gave countries a minimal reduction target (5 percent from 1990 emissions levels, to be achieved by 2012). They can either meet that target through their own reductions, or by purchasing emissions credits from countries or firms that reduce their own greenhouse gasses beyond their target level.

One of the key carbon trading mechanisms instituted by Kyoto is the Clean Development Mechanism (CDM). This is an arrangement which enables countries to offset their carbon targets by investing in emissions reduction projects in other countries – such as tree planting or wind power projects in the Third World.

But as Larry Lohmann from the British NGO Cornerhouse and the Durban Group for Climate Justice remarks, “The distribution of carbon allowances [the prerequisite for trading] constitutes one of the largest, if not the largest, projects for creation and regressive distribution of property rights in human history.”

Big oil companies, in particular, can win property rights to pollute at the level they always have, instead of facing up to their historic debt to the Third World for using it as dumping ground.

South Africa is a good case study of the abuses of carbon trading. In mid-2005 Sasol, one of the country’s largest companies, admitted that its gas pipeline project proposal to the CDM bureaucracy lacked the key requirement of “additionality” – the firm doing something that it would not have done anyway – thus unveiling the CDM as vulnerable to blatant scamming.

At Durban’s vast Bisasar Road rubbish dump – Africa’s largest landfill – community protests against ongoing carcinogenic emissions have derailed the World Bank and municipal state’s plans to market a methane-capture project at the site as a CDM project. According to Sajida Khan, a cancer victim leading the fight, “The poor countries are so poor they will accept crumbs. The World Bank know this and they are taking advantage of it.”

Similar protests across the Third World have targeted destructive CDM schemes such as tree planting at Brazil’s Plantar industrial timber plantation and in indigenous communities mass demonstrations are raising the profile of the dangerous market.

Carbon trading may also suffer classic contradictions of capitalist markets, such as volatility, overproduction and manipulation. In April, Gordon Brown made a strong pitch at the United Nations “for a global carbon trading market as the best way to protect the endangered environment while spurring economic growth”.

But ten days later, the European Union’s Emissions Trading market crashed thanks to the overallocation of pollution rights, and the carbon market price lost over half its value in a single day, destroying many CDM projects earlier considered viable investments.

Guardian columnist George Monbiot recently explained why CDM schemes like tree planting are so dubious: “While they have a pretty good idea of how much carbon our factories and planes and cars are releasing, scientists are much less certain about the amount of carbon tree planting will absorb. When you drain or clear the soil to plant trees, for example, you are likely to release some carbon, but it is hard to tell how much.

“Planting trees in one place might stunt trees elsewhere, as they could dry up a river which was feeding a forest downstream. Or by protecting your forest against loggers, you might be driving them into another forest. In other words, you cannot reasonably claim to have swapped the carbon stored in oil or coal for carbon absorbed by trees. Mineral carbon, while it remains in the ground, is stable and quantifiable. Biological carbon is labile and uncertain.”

The main force for a genuine alternative to capitalism’s fake market mitigation strategy will be public pressure.

With Third World communities and progressive environmentalists – especially the Durban Group for Climate Justice – seeking and finding allies serious about the climate crisis, there will be fewer opportunities for Nicholas Stern and Gordon Brown to sell bogus market solutions to capital’s pollution problems.

Bond, Dada and Erion are the editors of the new book Climate Change, Carbon Trading and Civil Society, available from Rozenberg Press, Amsterdam 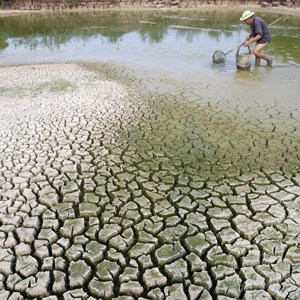 On the edge of climate disaster

South Africa: "We Guard Billions, but are Paid Peanuts"

Women of the World Festival 2019

The Women of the World Festival will mark its 10th anniversary next year. The event has been so successful that Jude Kelly has quit her day job as artistic director of the Southbank Centre to head up the venture full time. The festival has since been expanded into 17 countries around the world with 65...

Jeremy Corbyn’s refusal to bow to the demand for tougher immigration controls is a rebuttal, not just of the calls made by right wing Labour MPs such as Rachel Reeves, Chuka Umunna, Stephen Kinnock and shadow Brexit minister Sir Keir Starmer. It is also a rebuttal of Labour’s dreadful past. Labour’s stance on immigration is...

A century ago Constance Markievicz was preparing for the Irish Easter Rising. Mary Smith outlines the remarkable life of an upper class woman who was both a paramilitary leader and the first woman MP.

'It was as if you were cattle'