South Yemen: a clash of wills

This article is over 8 years, 8 months old
The struggle in South Yemen for independence from the North continues to be way down the agenda of the international media. Mirfat Sulaiman reports on a rising revolutionary tide which no amount of repression seems capable of stemming.
By Mirfat Sulaiman
Downloading PDF. Please wait...
Wednesday 01 May 2013

Travelling through the port city of Aden in South Yemen gives you a clear picture of both a city under occupation – with army checkpoints, tanks and armoured vehicles in the streets – and a people’s demand for independence. The South Yemeni flag is painted and hanging everywhere, along with revolutionary slogans, pictures of movement leaders and photos of those killed during the ongoing uprising. In contrast, the regime’s “unity” flag can only be seen on government buildings and military vehicles.

According to an activist who is part of the Al Harak movement for South Yemeni independence, the struggle has three aspects: protests, civil disobedience, and trade union action.

The protests that take place each Thursday call for the release of arrested activists, while street prayers on Fridays are followed by marches. Protests also happen at police stations and government buildings. People have been drawn from across the South to the main cities in five massive demonstrations which helped ease the international media blackout on the revolution.

A particular source of anger was the starting day of the “National Dialogue” conference in March in Sana’a, Yemen’s capital. The conference is part of a treaty brokered by the US and the rulers of the Gulf states that has helped contain the Yemeni revolution of 2011-2012. The revolution had demanded the removal of President Ali Abdullah Saleh. Despite ferocious repression that saw the killing and wounding of thousands, Saleh was unable to control this huge movement against his regime, making him a liability to his friends in Washington. The treaty removed Saleh from power, granting him and his circle immunity from prosecution and allowing him to carry on in politics and even to stand for presidential election in 2014. Saleh was replaced by his vice-president, Mansur Hadi, who came to office via a transitional “election” – largely boycotted in the South – in which Hadi was the only candidate. Social conditions have not improved across Yemen.

Hadi has drawn together different forces and figures from across Yemen into the national dialogue, including governing party Al-Islah and the old South’s Communist party. The dialogue, which has ongoing support from the UN security council, is widely seen in the South as deliberately excluding the real issue, which is the demand for independence. The mass protests called “The decision is ours” that took place on the 18 March were the public’s response. The conference’s official discourse of progress and reconciliation is seen as fraudulent – a cosmetic attempt to sanitise the regime on the world stage. The presence at the conference of regime figures associated with the killing of activists also triggered demonstrations in Sana’a.

Impact of neoliberalism
Before occupation was imposed by the Sana’a regime in 1994, the South had been under Russian direction – with state control of services, resources and land. Saleh brought in the typical features of neoliberalism when he opened up the South to the free market. Food and fuel subsidies were removed while the currency was devalued, causing price rises. The wholesale looting of the economy caused major job losses, forcing a skilled and educated population to fend for itself. Public housing, health and education were run down and sold off. Land and even beaches have been sold off for private development. Homelessness and overcrowding exist next to empty hotels and other new-builds, and the water and electricity networks have been systematically run down. Pensions were eroded and dismantled, leaving the elderly to beg or starve. Mass redundancies occurred in military and administrative jobs, legal protections disappeared, and private employers ramped up the level of exploitation. Government departments in the South were also relocated to Sana’a and key positions were handed to Saleh’s family and friends. The rule of deep corruption appeared alongside acute poverty and unemployment, while a wealthier layer of people moved down from the North and received preferential treatment in purchasing property, obtaining university places and jobs.

The regime’s investors and cronies whose pockets have been fattened further by US aid, claim that the South Yemen movement for independence is linked to Iran or Al Qaeda. The murky and destructive conflict between the US, the regime, local militias and the alleged Al Qaeda grouping has created an additional crisis in Aden’s neighbouring district of Abeyen, turning thousands into refugees as people are forced to flee.

The rise of the youth movement
Al Harak was started in 2007 by dissatisfied ex-army officers demanding an end to discrimination against southerners and their jobs back. Over time the debate and the movement have grown and spread across the South. The regime’s response – to attack and imprison people – helped to harden attitudes, while the Arab revolutions have given greater energy and confidence to the movement in the South.

The young drive the street movement forward, constantly blocking roads with stones and occupations, defying and skirmishing with the military, facing murderous repression. This has shown the desperate courage of those with little to lose. Hadi’s celebrations in Aden on 21 February to mark his first year in power turned into a massacre as both army and militias opened fire on peaceful protesters. Civil disobedience, with half-day total shutdowns twice a week, has intensified since then.

A confident youth-led revolutionary culture is developing, and is expressed in everything from new comedy to poetry, songs and music and documentaries on social media. Workers too are taking action. Teachers have been on strike, banking and government bosses were beaten up and physically thrown out of offices, and brief takeovers by workers of workplaces have occurred. The re-emergence of independent trade unions in the South has occurred naturally at this stage, reflecting the need for workers and students to organise alongside the street movement.

For the South the aspiration, as it is everywhere else in the Arab world, is for Arab unity. But the social conditions that have been imported from the North mean that unity is associated with injustice. Since unity with the North, women’s freedoms have been reversed – for generations previously women in the South had choice over what they wore, but after unification women were pressured to wear the burqa regardless of their level of religious commitment (of course, as socialists we defend a woman’s right to wear or not wear whatever she likes). Now increasing numbers of women who join the demonstrations, are taking off the burqa, work in the background to supply food and drinks and are slowly gaining confidence. Women now take part in trade union meetings and some play leading roles in the student movement.

People of Indian and Somali background, gay people, and the impoverished menial labour class, previously marginalised and oppressed groups, are putting their lives on the line in the revolution, hoping for a future without discrimination and exclusion.

The stalling of mass struggle in the North means that the focal point of revolution is at the moment in the South, but the possibility remains that the North – which is still tyrannised by poverty and corruption – will explode again, which could sow the seeds for a unity based on equality and justice rather than oppression.

The South has many reasons to be angry, but there is a pride in the revolutionary victory over the British in the 1960s. There is also the still recent memory of Communist Party rule in the 1970s and 80s. This state capitalist regime left a contradictory legacy. It was both highly authoritarian and repressive, but also provided a degree of redistribution, nationalisation, state protection, employment and stability.

Saudi fears
South Yemen stands out as different in the region for having had that experience. The rulers of Saudi Arabia are terrified of any such a system re-emerging on their borders, so they are building a long barrier across the entire border with Yemen and have started deporting Yemeni workers. This may also explain why the former South leaders who have become Al Harak’s figureheads stand so isolated on the international stage. For example, the UN has threatened sanctions against exiled South leader Ali Albeed. Ali Albeed, the most prominent international figurehead for Al Harak, has until now shown himself relatively responsive to the demands of the street. But not everybody feels that independence alone will automatically bring real change – there is a feeling that Southern capitalists would replace Northern capitalists and the masses would gain little.

Elections of representative leaders of grassroots activism took place in a neighbouring district to Aden. This could be important as it raises the possibility of building an organised body capable of uniting the public on the main social demands of independence and bringing a new wave of revolutionary leadership.

Hadi is becoming ever more desperate and frustrated at the success of the civil disobedience movement in the South, which has helped gain more recognition for the South internationally, and the army is using even more violent tactics. Women activists, in particular, are increasingly being targeted.

There is frustration, too, in the movement at the seeming lack of progress of the revolution, providing the opportunity for some voices to call for more armed struggle. This would be a dangerous step that could give the US and Hadi’s regime the excuse they have been waiting for to intensify bloody military repression. The lightly armed South cannot win a shooting war and it is the mass movement that acts as the real barrier to US and regime aggression. At the moment the only realistic path to freedom lies in increasing mass participation in the struggle and gaining the confidence of the uncommitted. Spreading the resistance and getting greater numbers of people involved and organised, rather than guns, are likely be the deciding factors.

US and Saudi fears are justified and their domination is looking shakier. Revolution, social change and the energy of mass struggle have obstructed the expansion of the so-called war on terror in the region, threaten multinational oil and other interests and have the potential to ignite revolts from below in the corrupt neighbouring monarchies. 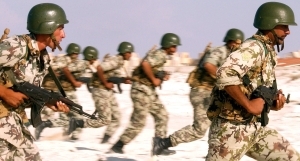 Which strategy for the left?

1989-2009: celebrations muted by the disappointments of the present