This article is over 18 years, 5 months old
Despite mass mobilisation against them, the right seem set to win the election in Spain. Andy Durgan assesses the prospects for a revival of the radical left.
By Andy Durgan
Downloading PDF. Please wait...
Thursday 04 March 2004

Despite the most important mass mobilisations since the end of Francoism, the general elections in Spain on 14 March could well result in yet another victory for the right.

Eight years of government by the conservative People‘s Party (PP) have seen constant attacks on working conditions (over a third of all workers, three times the EU average, have temporary contracts), further cuts in already meagre social services, low wages, privatisation and the strengthening of racist anti-immigration laws. Prime minister Jose Maria Aznar has not only supported the war in Iraq enthusiastically, but also unlike Bush and Blair does not see the need even to pretend to justify his government‘s decision publicly. The authoritarian style adopted by Aznar in his last term in office is combined with an increasing tendency to ape his fascist predecessors, from conservative Catholicism in education and ’moral‘ questions through to an aggressive defence of Spanish unity.

Under the PP government the national question has returned to centre stage. In particular, Aznar has deliberately set out to aggravate the conflict in the Basque country in a blatant attempt to win votes in the rest of the state by illegalising the radical nationalist party Batasuna and closing down its press. The moderate nationalist PNV, by opposing such repressive methods and daring to suggest that the Basques should have the right to decide on their future, have been branded by the PP as collaborators of the armed group Eta.

On the eve of the elections a major political crisis broke out after the secret services reported that the leader of the Catalan left nationalist ERC, Carod Rovira, had had secret talks with Eta. Subsequently Eta declared a truce that only affects Catalonia, hence leading to the ERC being accused by the government of ’collaboration with terrorism‘. The fact that the ERC has always been radically opposed to Eta‘s methods and had taken this initiative to try to open up some form of peace process is immaterial to the PP, who see this as a golden opportunity to discredit the Socialist Party (PSOE). Since May, the Socialist Party has headed a coalition government in the region which includes the left nationalists.

The government, however, has faced unprecedented mass opposition. Hundreds of thousands demonstrated against university reform in late 2001, followed by equally huge protests against the government‘s environmentally devastating plans to divert millions of gallons of water from the River Ebro to tourist complexes and businesses. In March 2002 half a million protested in Barcelona against the ’Europe of capital and war‘ during the EU summit. Four months later 10 million came out on a one-day general strike against plans to cut unemployment benefit rights and 2 million demonstrated.

But it was the war on Iraq and Aznar‘s fawning support for every outrage coming out of the White House that led to an avalanche of protest. An incredible 90 percent of the population declared their opposition to the war. Four million took to the streets on 15 February, followed by massive protests when war broke out and over the following weeks, including 80,000 students on the streets of Barcelona alone on 20 March, a nationwide two-hour general strike and a multitude of local actions.

Yet despite all this opposition opinion polls point to another PP victory, following their triumph in local and regional elections last May. Catalonia was virtually the only exception to this grim picture, with a left coalition taking over government for the first time since autonomy was re-established 23 years ago. The apparent contradiction between the mass opposition to the PP on the streets and voting behaviour can in part be explained by the nature of elections under capitalism, where passivity, individualism and media hype are the norm. But the principal reason lies in the failure of the main left parties to present a credible alternative to many of their former voters who now abstain.

In particular the PSOE has real problems overcoming the memory of 14 years of government during which it presided over the ‘modernisation’ of Spanish capitalism and as a consequence systematically attacked its working class supporters with the wholesale introduction of temporary work contracts, and mass unemployment, and did little to improve Spain’s low level of social spending. Added to this it practised widespread corruption, state terrorism in the Basque country and uncritical support for US imperialism.

Faced with new elections the PSOE has attempted to win ‘centre’ voters back from the PP by promising to cut taxes, recruit more police and be the best Spanish patriots. In fact the national question is the PSOE’s Achilles’ heel. Having tail-ended the right for so long, both in defending national unity and in posing the solution to the conflict in the Basque country only in terms of more repression, it finds it very difficult to explain to sectors of its electorate why it is now part of a coalition government with nationalists in Catalonia, particularly since its erstwhile coalition partners are now accused by the PP of ‘negotiating with terrorists’.

Meanwhile, vaguely aware that something is happening to their left and that they will never beat the PP playing their own game, the Socialists have begun to bring up the question of Iraq and the nonexistence of WMD, and even adopted the slogan ‘Another Spain is possible’.

Unfortunately the main left alternative to the PSOE, the Communist-led United Left (IU), seems unlikely to increase its vote significantly either. In the 1990s, reflecting widespread disillusion with the Socialist government, IU’s vote doubled to over 10 percent nationally and nearly 20 percent in key areas such as Andalusia and Madrid. However, the then leadership’s insistence that there was no difference between the PSOE and the PP led to a divided left vote and the right taking over a series of important local and regional governments. As a result, IU’s vote dropped by half. Its current image of tail-ending the PSOE and a tired and aged cadre has little appeal to the many thousands who have been on the streets against the PP.

At the centre of IU’s near-permanent state of crisis is the Communist Party which, like its French counterparts, is in terminal decline. Membership has steadily declined since the late 1970s from a high point of 250,000 to 30,000 today. The party is deeply divided internally between those nostalgic for the old Communist politics, a left wing which looks to Rifondazione in Italy and the present leadership, who would turn the party into an ‘eco-socialist’ party. The red-green option was boosted by the success of the former Communists in Catalonia in May’s local elections, although their success has more to do with the impact of the anti-war movement in the region than their professed eco-socialism. These divisions are reproduced inside IU, where at its last congress around 25 percent of the delegates supported the various radical left factions.

The left’s weakness is compounded by a deep-seated pessimism after years of defeat, combined with the ideological disorientation provoked by the collapse of the Communist bloc.

In contrast to the street protests, resistance in the workplaces has, in general, been at a low level. The Spanish trade unions remain the weakest in western Europe and are increasingly bureaucratic. The fact that the main federation, Workers’ Commissions (CCOO), is no longer led by the Communist Party has resulted in a more ‘apolitical’ orientation, an emphasis on providing services and ‘professional’ trade unionism and a reluctance to mobilise its members. One result of this has been that the traditionally more moderate socialist UGT is often prepared to take a more militant stance given its political links with the PSOE. The other has been the long term exodus, often due to expulsions, of militants from CCOO to minority left unions, hence further strengthening the hold of the bureaucracy.

The magnificent one-day general strike of June 2002 stands in stark contrast to the generally low level of workers’ struggle and clearly showed that many workers were prepared to fight if offered a lead. The militant response in recent weeks of shipyard workers to wage cuts and job losses, with pitched battles with the riot police, or the protests greeting factory closures, also shows the potential for resistance.

Whether the right, now led by Aznar’s successor, Mariano Rajoy, wins or not, the mobilisations of the last two years mean there is a massive layer of people open to an anti-capitalist alternative. The over 5,000 activists who travelled to the ESF in Paris are a good illustration of this. But unlike in some other parts of Europe, the organised radical left is extremely weak. The problem isn’t that the people to fill this political vacuum are not there – it is how to organise them. In the left of IU, in the dozens of local ‘anti-globalisation’ collectives, in the student movement and among left trade union militants there is the potential to build a new anti-capitalist left. 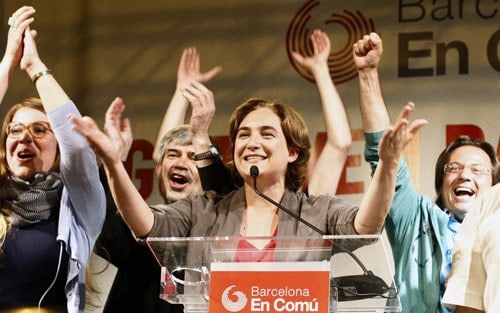