This article is over 20 years, 1 months old
You can't seperate sport from the racism and nationalism that go with it.
By Jo Cardwell
Downloading PDF. Please wait...
Wednesday 03 July 2002

George Orwell famously said, ‘Sport is war minus the shooting,’ and there are many examples to back this up. The phrase ‘nuclear cricket’ was used to describe the test series between India and Pakistan in 1999, the year both nations became nuclear powers. The hysteria around Euro 96 was whipped up by the press showing English and German players in Second World War helmets. In 1980 and 1984 the Olympics was boycotted mutually by the US and the Russians because of imperialist tension over Afghanistan, Nicaragua and Angola. In 1968 the resistance to war in Vietnam and the militancy of the civil rights movement led to two black athletes, Tommie Smith and John Carlos, raising their black-gloved fists in a Black Power salute. They never represented the US again.

The nationalism associated with sport is also about nation building. One can only hope that the Italian team in this year’s World Cup did not have the same message from Berlusconi as the World Cup team in 1938 had from Mussolini: ‘Win or die.’ Mussolini was so outraged at the growing level of resistance to his fascist regime that he changed the colour of the away strip from white to black.

The 1936 Olympic Games in Berlin were a propaganda coup for Hitler. The siting of the games had been agreed in 1931 as a way of bringing Germany back into the international community following its defeat in the First World War. Hitler and the Nazis had to play down their anti-Semitic and racist ideology, but the games were a major success for them, as much at home among ordinary Germans as internationally.

The argument now is that we are witnessing a new and harmless form of nationalism. However, racism has always played a part in the English nationalism of the past, and it is difficult to see how it doesn’t now. The Tebbit ‘cricket test’, where he suggested that the nation supported in cricket matches by immigrants and their children showed their real loyalty, was about racism and division. Some suggest that nationalism can be positive, by bringing together different parts of a country. When Pat Jennings, the world renowned goalkeeper, played for Northern Ireland this was used as proof that sport could cut through the sectarian divide, because Jennings was a Catholic. The mainly Protestant fan base loved Jennings, but that didn’t stop them singing sectarian songs about being ‘up to their knees in Fenian blood’ right behind his goal.

Cricket was promoted in most countries of the British Empire, and was used as a way of instilling into the indigenous populations the necessary requirements of industrial capitalism–working under one captain, observing certain rules, timekeeping, boundaries, fair play (!) and of course the superiority of whites. In fact it wasn’t until the 1950s in Britain that the West Indian national cricket team was allowed to visit with a captain who wasn’t white or fair skinned.

What sport did for the British ruling class abroad it certainly did for them at home. The development of sporting teams attached to workforces and churches to give the industrial working classes something else to focus on outside work was a feature of the latter half of the 19th century. Manchester United came out of the Yorkshire and Lancashire railways, Sheffield United out of the Sheffield cutlers and Arsenal out of the Woolwich Arsenal. Public schools also played a major role in establishing clubs. The motivation for establishing these clubs was sometimes explicit: ‘To keep the young men out of the dram shop,’ ‘Wherever cricket is played there is lighter crime,’ and, ‘With more curling clubs there would be fewer radical opinions and strikes among the working classes.’

The history of the development of modern sport is the history of the development of industrial capitalism. There is, of course, documented evidence of ball games, racket games and athletic games that date well before industrial capitalism. However they are unrecognisable from today’s sports. Take, for example, football and rugby, derivatives of folk football, where a game would continue for days, with no boundaries except the edge of the village, or the edge of the next village. People would throw or kick the ball, it was mixed, there was no offside rule, no 90 minutes, and really no discernible winners. The Olympics are always claimed as having their roots in the athletic culture of ancient Greek society. Yet their origins were about military training in a far from equal society at the end of the 19th, century and these were games which relatively few people would watch. The Olympics were revived with the emergence of international trade. The first four modern Olympics were held in conjunction with trade fairs.

It is common to talk of sport as a neutral medium which transcends politics. The phrase ‘It’s just not cricket’ carries the notion that while everything else in the world is dirtied by politics and inequality, sport itself operates on a different set of rules. Performance enhancing drugs in sport have created huge press hysteria, in the main because sports stars are often thought of as moral guardians, but also because it undoes one of the foundation stones of sport–the notion of fair play. Jim Firstle, a freelance sports journalist, notes that drugs have always been used in sport, long before technology and money were involved. In athletics there is an unwritten and unconfirmed notion that everyone is doing it. The key thing is not to get caught. Firstle reports that Dr Don Caitlin, who runs the International Olympic Commitee accredited drug testing laboratory in Los Angeles, likened the situation to attempts between the Cold War superpowers to negotiate nuclear non-proliferation treaties. One side would only crack down and get tough on its drug cheats if the other country did the same. To bust one’s drug cheats without the gesture being reciprocated put the anti-doping nation at a competitive disadvantage. The idea that there is fair competition in sport is as unlikely as the idea of fair competition in capitalism. 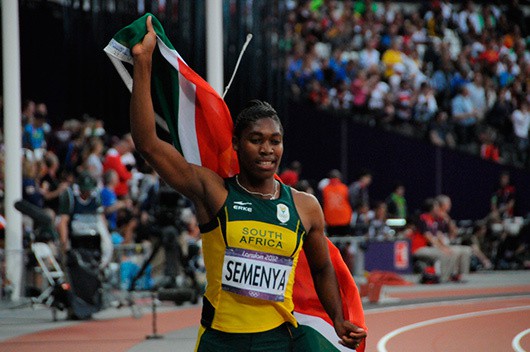 The Olympics: a nation united?