This article is over 13 years, 5 months old
The final stage of the Sri Lankan army's offensive to capture territory held by the Liberation Tigers of Tamil Eelam (LTTE) is approaching, with thousands of civilians being driven into an enclave on the north east coast.
By Barry Pavier
Downloading PDF. Please wait...
Sunday 01 March 2009

This is the end of President Mahinda Rajapaksa’s “solution by violence” to the civil war that has dragged on since 1983. He abandoned attempts at a negotiated solution and increased military spending hugely in preparation for the offensive.

The conflict has its roots in British colonial policy. The majority in the country was then the Buddhist Sinhalas; the minority Tamils, mainly Hindus and Muslims, were in the north. As usual the British recruited a minority into the lower levels of their administration, in this case the Tamils.

After independence in 1948 the new government was run by Sinhala dominated parties, who refused to grant equal rights to the Tamils. This began decades of discrimination.

During the period of violence that began in 1977, the LTTE physically eliminated other radical Tamil groups. While their authoritarian and militarist nature enabled them to sustain a series of heavy blows over the years, it has now become their undoing.

The autocratic nature of the LTTE leadership enabled the government to entice some disaffected commanders to split away, weakening the LTTE. The army has also gained a huge amount of new equipment provided by Rajapaksa, but also new tactics. It has been operating as a guerrilla force, using groups four to eight strong to infiltrate LTTE positions and disrupt their defences before heavy weapons are used.

In this kind of civil war the only possible military solution would have been to defeat the army in the field, march into the capital, Colombo, and dictate a peace. The LTTE never had the ability to do this and tried instead to garner support from politicians in the neighbouring Indian state of Tamil Nadu. Unsurprisingly, opportunist local politicians used the LTTE for local electoral success and have delivered nothing in return.

The current situation is more dangerous than it appears. The destruction and huge death toll will not just bring in a period of oppressive rule and possible ethnic cleansing for the Sri Lankan Tamils. Rajapaksa came to power at the head of an ultra-nationalist coalition which has raised Sinhala Buddhist nationalism to an unheard of level.

Parties in his coalition now talk of Sri Lanka as being the land of Sinhalas – all others are “visitors” to the island. Indeed, Sri Lanka is surrounded by enemies – not only Hindus, but Muslims and Christians. This implies that not only the Tamils, but also the substantial Muslim and Christian minorities, are the next targets.

Victory over the LTTE will not mean the end of conflict, but the beginning of a new round of racist attacks on minorities. In the next few months there will be a general election in India, where any possible government will be in coalition with one of the main parties from Tamil Nadu. This would increase the likelihood of military intervention should a serious round of ethnic cleansing of Sri Lankan Tamils occur.

This mess reveals the need for socialist politics. The tragedy is that once Sri Lanka had mass Communist and Trotskyist parties. Both got caught in parliamentary manoeuvres and attempts to influence “progressive” governments, and became marginalised, while the once Maoist JVP party collapsed into ultra-nationalism. The LTTE, tied down to Tamil nationalism, never attempted to appeal to the Sri Lankan working class. Their politics were a dead end. 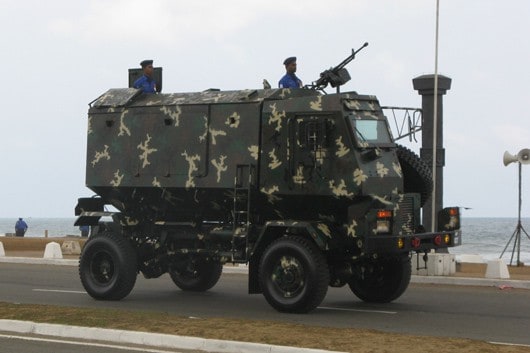