This article is over 16 years, 9 months old
Despite much talk of reconstruction since the Boxing Day tsunami ravaged the coastline of Sri Lanka, ordinary people still find themselves in a precarious position and fear for the future.
By Vinod Moonesinghe
Downloading PDF. Please wait...
Friday 01 April 2005

The biggest problem is housing. Even before the tsunami, there was a shortage of over half a million houses throughout the country, and to this must be added the needs of the 800,000 people who became homeless on Boxing Day. There seems to be very little sign of the large-scale housing projects that were announced in mid-January. Foundation stones have been laid for several housing schemes, but no further work has been done except in a very few areas.

The National Housing Development Authority made a decision to build terraces of ‘townhouses’ on the Australian model to replace the huts, shanties and houses that were lost. However, local government officers collecting data on people’s preferences in housing only ask them if they want individual houses or flats, indicating that the government is still very confused in its policy. Only a few properly planned housing schemes, with proper waste disposal and water supply, have been started.

The government has started enforcing the law which prohibits house building within 100 metres of the sea. Those people with relatives or friends having land more than 100 metres from the sea, and willing to share it, have been given planking for huts. This may cause problems later if permanent houses are not built for them.

However, most of the affected people have been given tents (mainly by the Red Cross or non-governmental organisations) and must pitch them on the shore, inside the 100-metre limit, because of the lack of land identified for building. Unless proper houses are provided very soon this could lead to a repeat of the pre-tsunami position, with thousands of temporary dwellings and shanties crowded onto the beach, making the inhabitants as vulnerable as before to another tsunami. This situation has been made worse by the government asking people who had taken refuge in Buddhist monasteries to leave.

In the Eastern Province, people complain that Muslims and Tamils are discriminated against. They complain that no action was being taken to enable the fisher folk to earn their living. The area is under military administration, which causes considerable unease among Tamil inhabitants.

The District Fisheries Solidarity Organisation (Difos), a co-operative federation of fisher folk in the Amparai District of the Eastern Province, held a day of protest on 24 February demanding that the government treat all ethnic groups equally.

Food is plentiful, and each tsunami-affected family receives a welfare payment of Rs 5,000 (£26) per month plus an extra Rs 200 (£1.05) as cash and Rs 175 (92p) in goods per person per week. However, even with this there is a backlog, with only the amount due for January having been paid so far.

The solidarity with the tsunami victims that continues to be shown is heartening. Individual foreign tourists regularly donate goods to the needy. University students have deserted their books and gone to the villages to help clean up. Workers in factories continue to contribute part of their wages to help the victims.

Nevertheless, there is widespread apprehension about the future. What happens when the welfare payments stop? What if the promised houses are not built? There is also a fear that the governments of the rich nations will renege on their promises of billions of pounds as reconstruction aid. 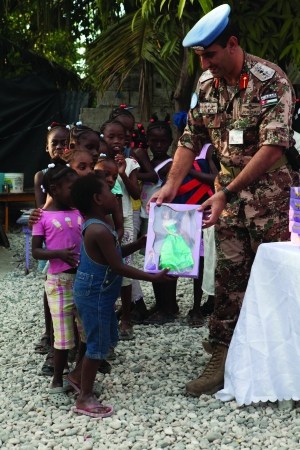 The betrayal of Haiti