Simon is quite right to suggest that there has never been a proper debate, but is wrong to imply that it is the left wing opposition to nuclear power which has denied such a thing.

Nuclear power generation began as a cover for the nuclear weapons programme. Famously the queen, on opening the Calder Hall reactor in 1956, declared that it opened ‘an era of cheap, free electricity’, despite the fact that Calder Hall’s purpose was to produce plutonium for Britain’s nuclear bomb programme.

Electricity is a by-product of the bomb-making process. The economics/politics of nuclear power in modern capitalist society still relies on the military leverage provided, hence the current hypocritical attacks on the Iranian nuclear programme by Bush and Blair. Socialists for this reason alone must oppose nukiller power, the ultimate state terror weapon.

Don’t believe, either, the claims that the problem of disposing of nuclear waste has been solved. On average each inhabitant of the UK lives 20 miles from a nuclear waste site, much of which will continue to pollute for more than 250,000 years. Claims are made year after year that a solution to the storage of nuclear waste has been found but, alas, these claims always prove unfounded. The most frequently referred to option, vitrification (conversion to glass), does not work, despite 40 years of development. The economic discussion regarding nuclear power has always downplayed (ignored) the costs of decommissioning and this is the case in the discussions on global warming. The huge downstream costs of storing nuclear waste are neglected when calculating carbon emissions, replaced by a touching faith in scientific development.

A good example of the dishonesty in the debate from the nuclear industry hinges on Chernobyl. Following Chernobyl it was found that sheep in North Wales and Cumbria had such high levels of radioactivity that they were banned (and still are banned at public expense) from human consumption. Later it was discovered that the radioactive contamination in the sheep was little to do with Chernobyl and everything to do with radioactive leakage from the Trawnsfynnyd (North Wales) and Sellafield (Cumbria) reactors.

The real obstacle to solving the problem of global warming is multinational capitalism and especially the oil/energy companies who have no interest in solutions which cut their profits and promote the wellbeing of the human race. Energy insulation and efficiency programmes together with effective public transport systems could massively cut the consumption of fossil fuels, reduce energy costs and improve the quality of life for everyone. The fact that there is quite a debate about what non-nuclear solutions might be used shows that there is more than one way to solve the problem of global warming.

Nuclear power fell out of fashion because the energy companies could not make money from it. It is coming back into fashion as oil prices soar and some people think they can make money out of it, with a lot of help from state subsidies and without challenging the oil companies’ predominance. New Labour’s energy policies are dominated by subservience to the British/Dutch multinationals BP and Shell.

Who knows what sort of power a future society will use? What is certain is that nuclear power is no sort of solution to today’s global warming. 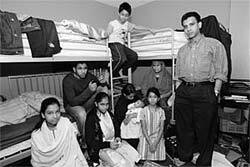