This article is over 11 years, 6 months old
It will take some time for us to judge the full meaning of the 10 November demonstration accurately. But it is worth reflecting on how it has changed the dynamics of both the student movement and the labour movement at large.
By Simon Englert
Downloading PDF. Please wait...
Wednesday 01 December 2010

The demonstration saw over 50,000 people march in an inspiring show of strength through London. This was not only the largest demonstration about education since 1987 but it also ended with an explosion of anger when thousands broke away from the central march to bring their anger to the doorstep of the Tory party headquarters at 30 Millbank.

I don’t want to focus on the broken windows or the couple of violent scenes that the media have been playing on repeat ever since, but I believe we need to register the importance of such a large and militant explosion of class rage. Thousands decided that simply marching wasn’t enough. They shouted and chanted for hours, built bonfires and played music out of huge speakers right at the organisational heart of the current government.

This protest changed the shape and scope of the resistance to austerity, introducing “European style” resistance to Britain. A Sky News presenter commented that the students and workers at Millbank “broke the consensus about cuts” – although it is arguable whether such a consensus ever existed outside of the coalition and its allies in the City.

Indeed, the demonstration took place at a specific juncture: the repeated unashamed class attacks on ordinary people by the Con-Dem coalition and the shift to the left in the speeches of the TUC leaders who called on workers to engage in “civil disobedience in the streets”. In a sense the demonstration burst a bubble. It showed millions of people across the country that they aren’t alone in suffering from the government’s cuts. It showed that resistance feels and looks better than fear, that it is possible for people to fight back and voice their anger despite the numerous claims coming from all sides of society that it is just “un-British” to resist. As the Guardian front page the following day ominously stated: “This is only the beginning”.

Indeed, since then we have already seen the first signs of a shift in our political landscape. Trade unionists, students’ unions and activists, including figures like Mark Serwotka (PCS general secretary), Mark Bergfeld (NUS national executive committee), Billy Bragg and John McDonnell MP have started a campaign in support of the protesters victimised for their part in the demonstration at Millbank. The TUC, undoubtedly inspired by the resolve of the demonstrators, called for joint action between trade unionists and students.

Within days of the national march, students occupied buildings in Manchester University demanding to see the university’s finances. At Sussex University 200 students went into occupation, putting forward national demands (including a halt in cuts to public services, no victimisation of protesters and no rise in fees). New possibilities have been opened up by the demo. We can, and need to, pitch our struggles and campaigns higher, bolder and on a larger scale.

The 10 November protest unleashed a built-up rage – in the streets of London and on television screens all across the world – that has been kept in for too long. It is the rage that most people felt at the sight of Tory MPs cheering and waving their order papers in the air while George Osborne announced the biggest attacks on the welfare state in living memory. And it is rage, and lots of it, that will fuel our resistance and make it last.

The 10 November was only the beginning.

The spirit of Occupy

People's Assembly: the next steps 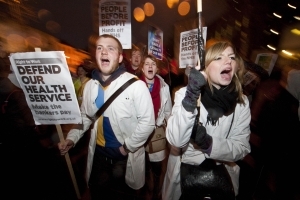 Healthy signs of resistance in the NHS 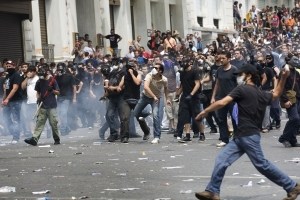