France is in Covid-19 lockdown with strong decrees enforced by heavy state power. Nearly everyone accepts that there has to be an end to most social interaction. But it’s being done in a harsh and class-based manner.

The first fine for violating the rules over confinement or being outside without reason is €135. This is increased to €1,500 in the event of a repeat offence within 15 days. In the case of four violations within 30 days, the offence will be punishable by a fine of €3,700 and a maximum of six months in prison.

A series of shocking videos posted online have shown police officers breaking all basic health guidelines by grouping together grabbing those they have identified as potential disease carriers. They issued fines totalling £500,000 in the single day of 17 March. The next day, according to a legal rights group, “‘at least five people who refused to respect confinement were placed in police custody”.

This is an extraordinary attack on democratic rights. And as a follow up Marine Le Pen has called for further crackdowns including a generalised curfew and heavy sentences for “looters”. In Nice on the French Riviera, police drones ordered citizens to go home. Armed with a loudspeaker, the drone whirrs above some of the city’s most popular locations, reminding citizens of the government’s confinement order.

Predictably the laws are being used against the homeless, with cases highlighted by anti-poverty groups in Paris, Lyon and Bayonne. Many food distribution services which reach out to people on the street or living in camps are closed, leading to real suffering. Social workers and volunteers are suspending action for the homeless because there is no protective equipment to provide these services.

All of this comes in the aftermath of Macron’s pension reforms last year. The mass strikes in key sectors that began on 5 December and went on for seven weeks have left a powerful legacy of bitterness at the government, and a political radicalisation and unity between workers, Yellow Vests, feminists and climate campaigners.

One of Macron’s more clever decisions was to suspend the pension attacks as he announced the Covid-19 strategy. Of course he will bring them back at some point, but withdrawing them took some of the edge off for some people. Certainly it was a retreat from his plan to railroad threm through without a vote in parliament.

The early stage of the Covid-19 crisis boosted Macron. Two-thirds of the French told a poll that they found his first address—a mix of seriousness and science and apparent humanity—to be convincing.

Around 35 million people, more than half the population, watched his second speech. His approval ratings are at the highest for a very long time.

But this may not last. As with rulers everywhere, populations can become enraged if the measures taken are shown to be ineffective. One sign of the disillusion with Macron came when French people—or at least some of them—voted in the municipal elections on 15 March in a state of growing fear and bafflement about government policy. With Covid-19 hitting, only 45 percent of eligible voters went to the polls.

Several days before the voting Macron had announced that the situation was worrying enough to close all schools and universities. His prime minister, Edouard Philippe, on the eve of the poll shut most cafes, restaurants, non-food shops, hairdressers, cinemas and sports centres. Yet the vote went ahead. We were being told #stayathome and #goandvote at the same time.

The second round of the election, scheduled for a week later, was cancelled as the virus took further hold. Overall the voting showed an advance for the Greens, and a setback for Macron.

Anne Hidalgo, the Socialist Party mayor of Paris since 2014, won the first round in the capital, but polled just over 30 percent of the votes. Second was Rachida Dati from the mainstream right wing Les Republicains.

The government-backed candidate, Agnes Buzyn, from the president’s LREM party, came in third with 18 percent. This was about half of the LREM’s score in the European elections last year.

More importantly, there has been considerable worker resistance and anger at being made to go to work in non-essential industries. At Bombardier, Capgemini, Valeo, General Electric, PSA, Renault and Renault Trucks have all seen strikes that forced bosses to halt production.

One particularly notable stoppage took place at the Dassault-Aviation Argenteuil site. This site produces the Rafale jet fighter used by the French Air Force, and the Falcons private jets. Nearly 1,000 people work there.

The CGT union rep explained, “Employees are outraged by management’s decision to stay open. They want to stay at home. If the family is confined to their house, it is useless if the guys continue to work—they will go home with the virus. Everyone wants total containment, for a minimum of 15 days.”

With managers refusing to take action, nearly 300 employees went on strike, forcing bosses to close the plant, at least temporarily. Such examples have given us all hope. 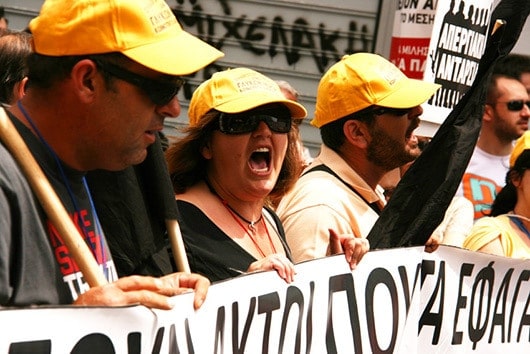