Syria: intervention only sows the seeds of further chaos

The attacks by the Islamic State (ISIS) on Paris, and on Shia Muslim suburbs of Beirut a few days earlier, are being marked as a new chapter in the “war on terror”.

French warplanes have now joined the US, Turkey, Russia, Iran and various Arab airforces in attacking Syria. Following the Paris attacks, France lashed out at Raqqa, the eastern Syrian city that was occupied by ISIS in 2012. Many of the “targets” in Raqqa had already been pummelled by US air strikes, and were largely abandoned. Activists on the ground did report, however, that the French bombings cut water and power to the city’s already beleaguered population. This act of war by France will make little military difference on the ground. ISIS has been able to weather months of US attacks, and the movement continues to seize territory in Syria.

The French intervention is aimed primarily at shifting the country onto a war footing, and make acceptable future military interventions. David Cameron, along with a gaggle of pro-war Labour MPs, would like Britain to follow suit. The skies above Syria are thick with warplanes, most of which are targeting rebel groups that are deeply hostile to ISIS, as well as to the Assad regime.

There is now some “coordination” between imperial powers and their various allies in an attempt to balance their support for competing factions that make up a mosaic of competing interests on the ground in Syria. Very few of the original rebel groups that took part in the armed uprising against the Assad regime have been able to maintain their independence.

Instead of ending the war, each new foreign intervention has brought with it an influx of more powerful weapons. Iran and the Lebanese Hizbollah, which rushed in to buttress the Assad regime, largely failed to go beyond securing a buffer zone along the border with Lebanon. That intervention spurred the Gulf kingdoms to throw their weight behind the rebels. In turn rebel victories drew in Russia. Now rebel groups are receiving tons of sophisticated US anti-tank missiles.

The Paris attacks have had a second consequence; they have opened the door for Vladimir Putin to break out of Russia’s international isolation following his intervention in the Ukrainian civil war. Putin is calculating that the West would fall in behind the widely despised regime of Bashar Assad as the only viable alternative to ISIS.

Putin is now unleashing the full range of Russian firepower, including cruise missiles, to shore up the Assad regime. Despite his anti-ISIS rhetoric, the vast majority of Russian bombs are being dropped on rebel-held Aleppo and towns and cities across the north.
The latest wave of mass bombings is pulverising the rebel-held suburbs of Damascus. These cities and neighbourhoods are far from ISIS lines.

These dangerous foreign interventions reflect a deepening volatility among the leading capitalist states.

The Middle East today is reminiscent of the great inter-imperial rivalries of the 20th century. The resulting chaos sowed the seeds for a century of war, colonialism and dictatorships.

ISIS emerged out of the rubble of Iraq. Now Syria is receiving the same treatment. Far from defeating ISIS, foreign intervention can only accelerate the destruction of Syria, creating a new cycle of misery and chaos. Only the re-emergence of the Arab revolutions, now under the boot of reaction, can break the impasse. 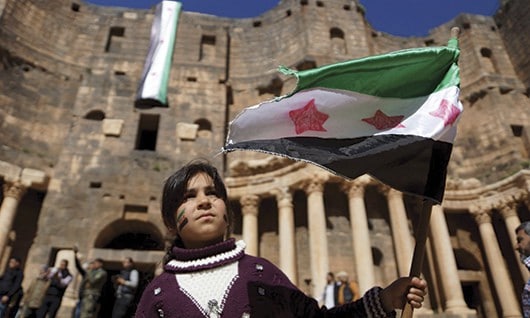