This article is over 4 years, 8 months old
By Michael Dance
Downloading PDF. Please wait...
Tuesday 02 May 2017

At the National Union of Teachers conference in April a historic motion was passed supporting positive positions on transgender rights and committing the union to fully implement the recommendations of the Gender Recognition Act.

Over recent years arguments have taken place about transgender rights both on the left among feminists, and on the right. These have often been specifically about the right of transgender people to self-identify and have access to single sex bathroom facilities.

In Britain feminists such as Germaine Greer and Julie Bindel, and recently the presenter of BBC Radio 4’s Woman’s Hour, Jenni Murray, have made critical statements that trans women are not “real women”. In the US a transphobic row erupted over trans women being excluded from female bathrooms in North Carolina.

As socialists we stand with the oppressed. We understand the right of self-identification for trans people and support trans women’s and men’s rights to use same sex bathrooms. Although women and trans men and women may experience oppression in different ways, it is in their common interest to fight for access to healthcare, control over their bodies and freedom from gender stereotypes and discrimination.

The motion put to NUT conference called for the union to unequivocally support transgender teachers and students at school and advocated support for those who wished to self-identify and/or transition. SWP teachers supported the motion and passed it in several associations, helping to ensure that it got onto the conference agenda.

However, at conference an amendment was put removing reference to self-identification and use of same sex bathrooms for trans people. Some elements of the left who sympathised with some of the critical feminist arguments on transgender rights supported this amendment, along with the right of the union.

The amendment argued for a commission to look into the matter and looked to defer any decision on the transgender motion for another year — effectively kicking it into the long grass. This led to some quite bitter arguments before conference.

At conference the motion was one of the most contentious. Yet through the united work of socialists, LGBT+ teachers and members of other equality strands the motion was passed with over 80 percent of the conference hall voting for it. The motion was proposed by a trans man and seconded by a member of the SWP.

This shows how activists working in a united front against oppression can win. But it also shows how much attitudes about gender and sexuality have moved on in the years since the abolition of the homophobic Section 28 in 2003. In many schools, students and teachers are questioning gender roles and developing spaces to deal with gender dysphoria, to reflect on and make informed decisions about their own lives.

The NUT now has the most advanced position on transgender rights of any union in Britain. It is a policy that we can now look to win in every union across the TUC and the wider movement. It can also be the impetus for a more general positive change in attitude in society about transgender rights.

A vision for education 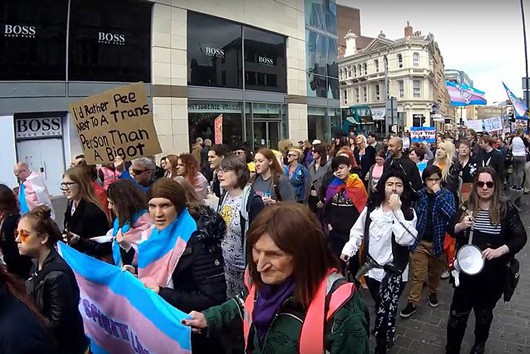 In the engine room