Without the advantages of educated families or private tutoring, their choices on leaving school are narrow. Tuition fees make progression to university an impossible dream for many and the education on offer in further education colleges is increasingly directed to narrow, utilitarian “employability” skills, at a time when there are precious few employers taking people on.

Funding is based on achievement, so those who are unable to achieve the target qualifications – such as older people, women, second language speakers and people with basic literacy skills – are becoming increasingly excluded.

The people who most need education are those bearing the brunt of class closures. The government is removing the bottom rung of the ladder, denying the poorest and most vulnerable sectors of our society the opportunity to climb out of poverty. With youth unemployment running at nearly 18 percent, this government is blighting a generation in a way not seen since Thatcherism.

However, up and down the country people are fighting back. Lecturers, students and supporters at London Met University, Soas, Doncaster College, Tower Hamlets College and other institutions are taking to the streets to defend jobs and education. The University and College Union (UCU) recognises that the fight for education and the fight for jobs are indivisible. The way forward is to work together with students, cleaners, support workers, other unions and the unemployed to build militant campaigns that challenge the restrictive trade union laws and take the struggle onto the streets.

As branch secretary of the UCU at the College of North East London I’ll be taking part in the protest outside the Labour Party conference on 27 September, called by the UCU and other unions. I’ll be there because this bloated and corrupt government onslaught on the jobs, rights and dignity of ordinary people cannot go unchallenged.

We need to be at the Labour party conference to demand that the wealth of our society is not poured into the troughs of fat cats, bankers and self-serving MPs, or blown on illegal wars and occupations, but that it is used to create jobs for all, decent education, public services based on need and a decent future for everyone.

For more details about the protest outside the Labour Party conference, contact UCU. 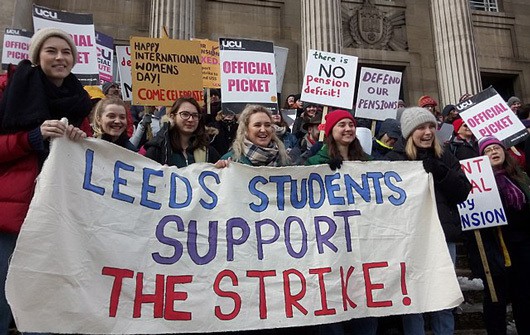