A Test for Reel Radicals

This article is over 16 years, 4 months old
Ben Dickenson wonders whether Hollywood is capable of dealing with the 9/11 attacks.
By Ben Dickenson
Downloading PDF. Please wait...
Saturday 01 April 2006

How has Hollywood responded to 9/11? According to one critic writing in the film magazine Variety last year, 9/11 was “too embedded as a moment of torture in the soul of America” to make good movie material. Well, that’s one way of looking at it.

However, Touchstone Pictures released Pearl Harbour in 2001, which addressed the equally momentous air attack on the US by Japan during the Second World War. Pearl Harbour was a simply awful film, inspiring radical actor Sean Penn to suggest the film’s director, Michael Bay, should be punished “with rectal cancer”.

Penn was reacting against the common Hollywood narrative – foreign forces assault Americans, a bloodthirsty American reprisal ensues, all justified by the terrible actions of the “enemy”. One such film was Black Hawk Down, which was set in Somalia. It wasn’t a response to 9/11 but its release, intended for March 2002, was brought forward four months after the attacks on the World Trade Centre to capitalise on “America’s need for revenge”.

In 1993 two US Black Hawk helicopters were shot down over Mogadishu, Somalia’s capital. According to the film’s website, the helicopters were there to discipline a Somali “warlord” who was controlling food supplies. The film dwells on the horrific deaths of US soldiers as they try to escape, leaving no doubt that the Americans are morally justified in wreaking hell on the Somalis. In the corresponding real life events just 18 US soldiers died, while over 1,000 Somalis were killed by US gunfire. Who were the true victims?

Since 9/11 this question has been asked repeatedly by Hollywood’s radicals. Tim Robbins and Susan Sarandon took part in performances of The Guys, a play based on the testimony of firefighters who attended the World Trade Centre. They said that they wanted to “put into perspective who had suffered, and where our efforts should be placed – which is not in invading Afghanistan”. Robbins followed up with Embedded, his play about the media and the Iraq war, while Sean Penn made a short film, 9.11.01, which focussed on a disenfranchised ordinary American. But still there has been no major film focussing on 9/11 itself… until this summer that is.

Perhaps the incessant rolling news images of planes crashing into the Twin Towers was deemed enough by Hollywood’s right wingers to justify the assault on Afghanistan in 2001, and the subsequent war in Iraq. So can we breathe a sigh of relief that the first fictional film about 9/11 is being directed by a longstanding Hollywood dissenter?

Oliver Stone has made some inventive visceral attacks on the ideology of the US’s right wing elite. Salvador depicted a Latin American nation wracked by a civil war in which the US was complicit. Wall Street detailed the ruthless corruption of profiteering stockmarket businessmen. Natural Born Killers deconstructed the media’s contribution to the violent excesses of modern society. Interviewed in the Nation in 1999, Stone made his position on politics in the US today clear: “I’m not a Democrat, and certainly never a Republican… I believe in the people, the working people, of America.”

World Trade Centre is set in the immediate aftermath of 9/11. John McLoughlin and William J Jimeno, the last two survivors who came out of Ground Zero, are the subject. The film looks set to be visually challenging – recreating the continuing collapse of the towers alongside the compelling personal dramas of the central characters. But will it go beyond the immediate situation to raise any wider questions?

If Stone’s own comments are anything to go by, those of us wanting more will be disappointed. “This film is not about… the politics of 9/11 in any way,” says Stone. “It’s… a document… a procedural.”

Stone is out of kilter with the most progressive dramas coming out of Hollywood. Syriana and Good Night, and Good Luck, produced by Participant Productions under their slogan “Changing the world one movie at a time”, are real attempts to pose questions and encourage audiences to action. We can only wait with concerned anticipation to see if Stone has produced a film without analysis. He may have left his movie open to use by the US right as a document of moral justification for the horrific revenge exacted on Afghanistan and Iraq. Let’s hope there’s more to it than that.

Ben Dickenson is the author of Hollywood’s New Radicalism 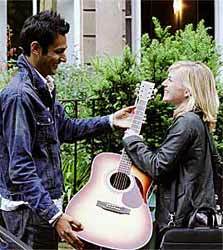 The Beat Hotel - the photography of Harold Chapman