Humanitarian aid has become a multibillion dollar business. Conor Foley’s book explains how organisations and movements set up to help the poor and dispossessed have often betrayed them.

The Thin Blue Line – a reference to United Nations (UN) “peacekeepers” – shows how the doctrine of humanitarian intervention is increasingly being used as a cover by Western imperialism to impose its agenda on poorer nations.

Foley is well placed to chronicle all this. For over 20 years he has been a dedicated activist working for a variety of humanitarian organisations, including Amnesty, Liberty and the UN High Commission for Refugees. He has worked in some of the toughest places – Kosovo, Bosnia, Afghanistan, Colombia, Brazil, Sri Lanka, Indonesia, Liberia, Uganda and the Caucasus. His earlier books include Combating Torture.

It was Nato’s military action in Kosovo where Tony Blair first acquired the image of a “humanitarian war leader”. But, as Foley argues, “Kosovo set a precedent for Iraq because the short term consequence of military intervention was to turn a simmering crisis into a full scale humanitarian disaster… Kosovo also set a precedent of Western politicians lying to the public in order to justify the war and then lying about its causes and consequences.”

The book attacks the West’s double standards on human rights and contrasts US attitudes towards Iraq, Serbia and Afghanistan on the one hand, with Indonesia, Turkey and Israel on the other.

The book has weaknesses. Foley is no friend of Western imperialism but he gets sidetracked by illusions in the UN and in world diplomacy: “In the run up to the invasion of Iraq, many made little secret of the fact that they regarded removing Saddam from power and weakening the authority of the UN as an opportunity to kill two birds with one stone… Reform of the UN and the need to strengthen and democratise other institutions of global governance remain critical outstanding tasks.”

But his book is a counterblast to the B-52 liberals and former lefties who lined up with Bush and Blair to back the invasion of Iraq on “human rights” grounds:

“In April 2006 Britain’s defence secretary, John Reid, appeared to endorse the US government’s policy of denying the protections of the Geneva Convention to the Guantanamo Bay detainees as well as the doctrine of pre-emptive military action… Two years later foreign secretary David Miliband had to admit to parliament that previous assurances the government had given, that Britain was in no way cooperating with the CIA rendition programme, were wrong… For a Labour government, elected on a commitment to put human rights law at the heart of its foreign policy, to show complicity in such practices is nothing short of appalling.”

The book’s publication coincides with the 60th anniversary of the Universal Declaration of Human Rights. On Foley’s evidence there is no cause for celebration. 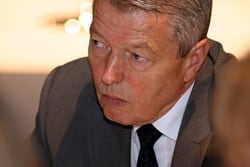