This article is over 20 years, 5 months old
The treatment of Afghan prisoners shows the brutal face of US imperialism.
By Pat Stack
Downloading PDF. Please wait...
Saturday 16 February 2002

So there we have it! A ‘war against terrorism’ turns out not to be a war at all. A ‘war of precision’ turns out to be a war of totally indiscriminate killing, and a ‘war for civilised values’ ends up with the most brutal and uncivilised treatment of the enemy.

Somehow it is meant to be the opponents of the war who got it all wrong. All those who thought it a civilising mission are apparently in the clear, despite the evidence in front of their very own eyes.

Of course there have been real attempts to hide the evidence. The number of dead Afghan civilians is contested–‘no evidence’ say the operators of the war machine, who have ensured that independent reporting on the ground is almost impossible.

However, there is evidence of the shameful goings on at Guantanamo Bay, where cameras have shown us cages not fit for animals, shackles, gags, hoods and blindfolds. Sensory deprivation has always been a tool of torturers everywhere. It was one of the favourite tricks of British army interrogators of IRA suspects in the early days of the conflict in Northern Ireland. Hooded prisoners would be taken up in helicopters and would be led to believe that they were being thrown from the sky as they were tossed from a helicopter that was in reality just feet from the ground.

It was part of the same process that led to Bloody Sunday, shoot to kill, frame-ups and state-sponsored terrorism.

Throughout, though, we were asked to believe that the British were the good guys, and the IRA were so evil that almost anything was allowed in the bid to crush them. Strangely enough as the repression grew so did the IRA.

Today we are asked, in the name of the dead of 11 September, to agree to anything–no matter how unjustified or shocking. The loathsome Donald Rumsfeld tells us happily that he cares not a jot for the rights of prisoners. So despite the fact that he, the pretzel puker and Tony Blair kept telling us we were at war, it now turns out that those ‘at war’ against the west weren’t at war at all.

The prisoners are not prisoners of war according to Rumsfeld. Instead he offers us a linguistic and legal leap into the unknown, describing them as ‘unlawful combatants’. For them, no due legal process, no Geneva Convention, not even a hint of decent treatment. And just to top it all off, we have the humiliation of the prisoners’ religion and culture.

We’re told the prisoners are so dangerous it would be foolhardy to let them walk about freely, let them see where they’re going or let them speak. So frightening are these unarmed, undernourished and bedraggled prisoners that the might of the good old US Marines armed to the teeth would be no match for them.

Apparently the notoriously harsh US prison system would be as secure and draconian as a Butlins holiday camp to this particular group of prisoners.

One of the more ludicrous reasons given for all this is that one of the prisoners bit one of the guards. Here is a man locked up and without guns, but by using his teeth he has apparently justified a whole regime of illegal imprisonment. It rather reminds me of the famous scene in ‘Monty Python and the Holy Grail’ where one knight, having had all his limbs cut off by another, calls out after his conqueror, ‘Come back here, you coward, and I’ll bite your legs off.’

To the Python team it was a joke, but to Rumsfeld it is a justification.

To add to the nastiness of it all comes the justification for the cutting of hair and the shaving of beards. Fear of lice, we are told, was a reason to humiliate devoutly held religious traditions. It is a sobering thought that prison guards in Nazi Germany did exactly the same thing to the curls and beards of orthodox Jews. How strange that the civilised, freedom-loving warmongers should find themselves sharing historical footnotes with such bedfellows. Little wonder Terry Waite finds it easy to draw comparison between his treatment as a hostage in Beirut, and the US’s treatment of these prisoners.

Indeed so awful are the events in Camp X-Ray that even the pro-war posturing of the likes of Christopher Hitchins have been blown off course. Managing to dig something from his distant past, Hitchins came out raging against the behaviour of the US in this instant.

Not so, of course, for the New Labour government. Blair and Straw made the odd perfunctory statement about the need for humane treatment, but Blair has apparently assured Bush that he will not rock the pro-war boat over this question.

Meanwhile the loathsome lickspittle Ben Bradshaw rushes from parliament (with Peter Hain nodding assent in the background) to television studio to pressroom telling anyone who will listen that Camp X-Ray is an open air Hilton, the Marines merely grown-up woodcraft folk, and the haircuts the finest work of Vidal Sassoon.

With no real evidence and with everyone from the Daily Mirror to the Red Cross, from Hitchins to former US Attorney General Ramsey Clark crying foul, Bradshaw becomes the three wise monkeys rolled into one, evil apparently escaping his notice, blown past by the breeze of ambition, no doubt.

I don’t suppose he watched the recent film on ITV about Bloody Sunday. It’s a shame, because there was a fantastic scene near the end where, following the brutal murders, a long line of young men who up to then had just been enthusiastic stone throwers queued up to join the IRA.

I wonder how many young Muslims watching the horrors of Guantanamo Bay will reach the same conclusions. Ah yes, the ‘war against terrorism’ marches on triumphantly.

Guantanamo Bay: 'This is Not the Dark Ages'

War and Resistance: A Perversion of Justice 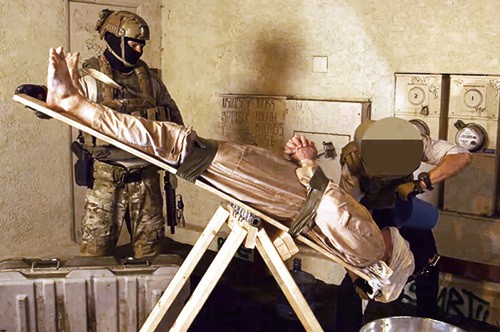