This article is over 17 years, 9 months old
The expulsion of the RMT from the Labour Party is hastening calls to democratise trade union political funds - and not before time.
By Martin Smith
Downloading PDF. Please wait...
Tuesday 06 April 2004

For 100 years the trade union movement has loyally backed the Labour Party. In the past few months real cracks have begun to open up. At midday on 7 February 2004 the Labour leadership expelled the RMT. Its crime? A special conference decision to uphold the right of branches and regions to support parties other than the Labour Party. The decision to expel the RMT was not just made by the cabal around Blair – NEC delegates from Amicus, GMB, GPMU, TGWU and Unison voted for their expulsion. Members of the ‘awkward squad’ control all five of these unions!

Far from cowing RMT activists, it has made many even more determined to create a genuine opposition to Blair. Within a few weeks of the RMT special general meeting, Manchester Piccadilly and London Waterloo branches voted to support Respect: The Unity Coalition, and the Wrexham branch voted to support Forward Wales, the organisation launched by Welsh assembly member John Marek. Over the next month three regions of the RMT will be voting on proposals to back Respect.

If the Labour Party’s strategy was to isolate the RMT then it couldn’t have been more wrong. Four weeks later the FBU national executive committee rushed through a motion that allowed regions to support other political parties. However, financial donations can only be made with the agreement of the annual FBU conference.

Given the FBU leader Andy Gilchrist’s public support for the ‘reclaim Labour’ project, the decision came as a big surprise. But in many ways it shouldn’t have done. Ever since the firefighters’ dispute – where strikers were described as ‘fascist bastards’ by a Labour minister – the desire to change the relationship with Labour has become overwhelming.

This anger with Labour was reflected in the motions submitted for this year’s FBU conference in May. Three brigades (Strathclyde, Northern Ireland and Berkshire) submitted resolutions calling for outright disaffiliation. A further 14 brigades submitted motions demanding the right of regions to donate money to other candidates and parties (effectively the RMT position). In other words a third of all FBU brigades had submitted motions openly challenging the union’s relationship with the Labour Party. Fearful of a complete break between the union and Labour Party, Gilchrist and the executive were forced to open up the political fund, but only in order to maintain a relationship with Labour.

As the CWU conference approaches in June, it too faces moves by rank and file delegates to open up its political funds. Already CWU Scotland No 2 branch has broken the union’s rulebook and affiliated to the Scottish Socialist Party.

Only a fool would dismiss this challenge to Labour’s funding hegemony. It’s clear that the ground is rapidly shifting away from the Labour Party in many unions. Just like Blair and the Iraq war, the union leaders continue to try and draw a line under the debate on the political fund, but every time the government cooks up a new scheme the debate re-ignites.

This mood is beginning to seep its way into the top of the union movement. Last November the TUC asked its affiliate unions to submit statements about the way forward for the movement. Its findings were published in an internal document, Responses to TUC Strategic Review – Facing the Future, in February. Two things are very apparent. Firstly a large number of unions believe the TUC should play a greater role in the mass movements that are growing in Britain. This was best summed up in the Unison submission, which argued, ‘At national level the TUC should be building alliances and cooperating with other social movements and interest groups. It was perhaps a missed opportunity that the TUC did not put itself at the head of the anti-war movement.’

Even more revealingly, a number of unions argued that the TUC relationship was too close to Labour. For instance the influential TGWU wrote, ‘At the outset, the TUC has to recognise the changed mood among sections of working people who feel they have gained little from the orthodoxy of partnership deals… Put bluntly, working people wish to see their organisations display a new assertiveness in representing their interests towards employers, government and other external bodies.’

But union leaders like Tony Woodley (TGWU) and Dave Prentis (Unison) only want to go so far. They’re only prepared to criticise Labour in order to protect it. Woodley said as much in Andrew Murray’s book on the awkward squad (A New Labour Nightmare): ‘I don’t support breakaways from Labour, there is just no sense in it. So we need a real change of leadership to one that remembers the roots of the trade unions and Labour Party. There are people like Gordon Brown, but there are others.’

Gordon Brown! Is this the same Gordon Brown that announced the slashing of 40,000 civil service jobs in last month’s Budget? So far the reclaim Labour strategy has been a disaster. Don’t take my word for it – ask Geoff Martin, the convenor of the London Region Unison. He wrote in Labour Left Briefing (March 2004), ‘What are those of us left in the Labour Party supposed to rally around? Conference calls to reclaim the Labour Party, that melt away like a three-goal lead at Spurs as soon as the cameras are turned off, aren’t enough. How do you square off the platform posturing about putting the Labour back into the Party with the atrocious track record of many of the paid union hacks on the party NEC and the sponsored MPs who take our members’ subs with one hand for “constituency development plans” and knife them with the other?’

Even if there was no political alternative to Labour in place, the argument about breaking with Labour would still rage on inside the union movement. In all probability the argument would take the form of breaking up the political fund, or support for the Liberals or parties with openly nationalist agendas like the Scottish National Party or Plaid Cymru.

But the fact is the launch of Respect and the electoral success of the Scottish Socialist Party (SSP) has begun to draw around it a small but significant group of trade union branches and regions who are prepared to create an electoral alternative to Labour.

Only a few years ago several union leaders mocked those who argued for opening up trade union political funds. Today the mocking has stopped and the argument is becoming much sharper. Those opposing the democratisation of unions’ funds are using much more sophisticated arguments. This was demonstrated at the 700-strong Convention of the Trade Union Left. A number of leading Labour Party supporters in the union movement spoke. Their arguments against opening up the political link can be broken down into two main strands.

Firstly, a number of Labour Party supporters argued that any move to democratise the political fund is an attempt to get rid of it. Nothing could be further from the truth. Socialists have always supported and campaigned for unions to have a political fund. We believe that it is a positive step for trade unions to demand political representation as well as campaigning over economic questions. But as Andy Gilchrist found out, by opposing any opening up of the union’s political fund you create a backlash. If the only choice given to trade union members is Labour or nothing, a growing number will vote for nothing. Democratising the union’s political fund is the only way to ensure the political fund is maintained. And what could be more democratic than regions, branches and unions deciding where their money goes? The fact is many in the Labour left now accept this argument.

Secondly, some Labour Party activists claim that opening up the political fund will only strengthen Blair. Blair may claim that he wants to weaken the link between the unions and the Labour Party. But there is a massive difference between Blair’s rhetoric and practice. On average the unions donate about £9 million a year to the Labour Party. They still remain Labour’s biggest single source of income. Without that support Labour could not function.

The failure of the reclaim Labour project has only given Blair more confidence to wage war on working class people. Far from hindering the project, an electoral opposition to Labour will in fact help the Labour left. In Scotland, where the SSP has been able to challenge Labour, it has forced the Labour Party to make a turn to the left.

That said, Respect is not about gingering up the Labour Party. Tens of thousands of people no longer believe that the Labour Party can be a vehicle for progressive change. The debate raging inside the union movement is part of the process of creating a serious alternative to Labour. The success of this argument is very much dependent on the scale of the Respect vote in June. But the Respect coalition is not just about winning the top of the union movement – it wants to win the hearts and minds of the tens of thousands of workers who want a socialist alternative to Labour. Over the past few years we have seen growing numbers of trade unionists march against war and strike for better pay and conditions. Now a growing number also want a political voice.

Spring in our step 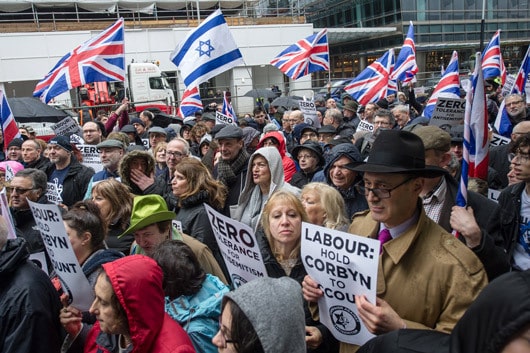 Antisemitism, the witch hunt and the left