The Transatlantic Trade and Investment Partnership (TTIP) is a bilateral trade deal between the EU and the US. Its claimed purpose is to boost trade by removing non-tariff “barriers”. These so-called barriers are the regulations which protect workers’ rights, health and safety, and the environment.

The deal aims to make it easier for global firms to sue governments for “interfering” with profits. Environmental and food safety standards will be under threat through “regulatory harmonisation”, while public services could be forced to undergo privatisation through deregulation and the liberalisation of public procurement.

TTIP is one of a series of bilateral agreements centred on the US; the Trans Pacific Partnership (TPP), is currently being negotiated between the US and the Pacific Rim countries. If agreed, TTIP would represent the biggest trade deal since the World Trade Organisation (WTO) was set up 20 years ago.

TTIP is not the only trade agreement the EU is negotiating — indeed, this whole subject suffers from alphabet soup of obscure acronyms. The EU-Canada trade deal, CETA, is further down the negotiating pipeline and is seen as a dry run for TTIP. And then there is TiSA, the Trade in Services Agreement, whose aim is to prise open public utilities such as water to multinational corporations.

These bilateral negotiations have emerged since the stalling of the WTO’s multilateral process and the onset of the financial crisis. They are a highly ideological, neoliberal response to the long term crisis of Western capitalism, a consequence of the low growth rates of Western economies and the rise of the BRIC economies. It is no coincidence that Russia is excluded from both TTIP and the TPP, and China from the TPP.

In order to understand the significance of TTIP and other similar agreements, such as TPP, it is useful to locate these within the system of global trade and global capitalism. World trade is governed by a series of international trade agreements. Free trade (as in tariff-free trade) already exists and is governed by the multilateral agreements of the WTO. Then there are the regional trade blocs such as the North American Free Trade Agreement, whose objective is to remove “non-tariff barriers” to trade, and then the bilateral agreements. All these trade agreements emerged in the 1990s.

But unlike the WTO, TTIP also fulfils a geopolitical objective. A Transatlantic Free Trade Area has been talked about since the 1960s as an economic pillar to Nato. Following the collapse of the Eastern Bloc, Europe’s elites sought to overcome their insecurities about US commitment to Western Europe. A Transatlantic Declaration was signed in 1990 establishing bi-annual summits between EU leaders and the US government which, among other things, would “promote market principles”, maintain a commitment to Nato and support multilateral free trade agreements.

In 2007 US president George Bush and German chancellor Angela Merkel established the Transatlantic Economic Council tasked with steering TTIP. Their aim is to bring the EU and Nato closer together. TTIP is part of a strategy of realising this objective. US presidential hopeful Hillary Clinton has described TTIP as an “economic Nato”.

The TPP is part of President Obama’s “pivot to Asia”. He has said, “If we don’t write the rules, China will write the rules out in that region.” Japanese prime minister Shinzo Abe is also keen to strengthen economic and military ties with the US as tension mounts with China over control of the South China Sea.

The leaked negotiating texts for TTIP look like a corporate wishlist. In particular with regard to EU food standards they overturn the ban on GMO foods, and allow importation of beef treated with banned growth hormones, or treated with bleach. In addition US healthcare corporations want access to Europe’s healthcare market. When campaigners opposing privatisation demanded the NHS be excluded from TTIP’s remit, prime minister David Cameron refused. In return the EU wants greater access to the US finance sector and the banning of “Buy American” provisions.

The leaked EU proposal for a dedicated chapter on energy and raw materials in TTIP shows how environmentally damaging the agreement will be. The EU is increasingly desperate to secure alternative sources of oil and gas in order to lessen its dependence on Russia. The European Commission admits that TTIP will add an extra 11 million metric tons of CO2 to the atmosphere, undermining the EU’s own emission reduction commitments.

A key ideological component of these agreements is the concept of “investor rights” — as if investors were an especially vulnerable class of people. Just why the rights of investors should be privileged above those of others is never explained, merely asserted.

Arguing for the removal of the rights of British citizens to appeal to the International Court of Human Rights in Strasbourg, Cameron says “the British parliament is accountable to the British people, and British judges make decisions in British courts.” Yet the same Cameron is comfortable about an unaccountable supranational court having the right to overturn the decisions of a British parliament when it comes to protecting investors’ rights. After all, he wants to put “rocket boosters” on TTIP.

The supranational system of court known as Investor State Dispute Settlement (ISDS), allows corporations to overturn democratic decisions in order to protect these “rights”. These panels give no right of appeal and their deliberations are not open to the public. Highly paid corporate lawyers sit on these arbitration panels. And conflicts of interest abound as lawyers from the same firm can adjudicate and act as counsel in the same cases. It is not surprising that some of the world’s major law firms, who are keen to expand their investor protection practices, are some of the biggest lobbyists for ISDS.

Some recent examples of ISDS cases include Swedish energy company Vattenfall demanding €1.4 billion when Hamburg’s Environmental Authority imposed quality controls on emissions from its power plant. Vattenfall claimed that those standards made the investment project unviable. Using ISDS provisions, the company asked Germany for compensation. The case was eventually settled when the City of Hamburg agreed to lower the environmental requirements previously set.

The British company United Utilities sued the Estonian government for not allowing a rise in water prices. The company demanded to be reimbursed by €90 million — its predicted profits up until the year 2020. It is thanks to a trade agreement between the Netherlands and Estonia that United Utilities — which has a letterbox company in the Netherlands — can demand compensation from Estonia.

Other cases include Philip Morris, currently suing both the Australian and the Uruguayan governments for, respectively, introducing plain packaging for cigarettes and daring to print health warnings on packaging; Veolia, the multinational waste and energy company, which sued Egypt for introducing a minimum wage; and Argentina, sued for freezing energy prices to protect consumers hit by the country’s financial collapse.

The major corporations pushing for TTIP are organised through a lobby group, the Trans-Atlantic Business Council, whose membership comprises the 70 largest US and European companies. They have been given privileged access to the negotiating texts not available to elected representatives or NGOs.

There has already been massive opposition to TTIP. The European Commission was forced to suspend negotiations with the US on the inclusion of ISDS provisions pending a public consultation. An indicative vote on ISDS in the EU parliament last year showed the lengths to which EU leaders are prepared to go in stitching up the EU’s only elected institution, despite a massive campaign and one of the largest ever mobilisations of civil society.

The consultation on ISDS ran from March until July 2014 and received a record 150,000 responses from across the EU, the vast majority of which rejected the introduction of ISDS powers. Yet the European Commission has resisted calls to exclude the controversial issue from TTIP.

The only channel of direct accountability within the EU is the European Citizens’ Initiative (ECI), which requires an official policy review from the European Commission if 1 million signatures are collected from EU citizens within a year. In July 2014 an ECI against TTIP and CETA was formally lodged with the European Commission, with the intention of starting the collection of signatures in September. Yet the commission refused to register the initiative on the grounds that only a positive ECI calling for a trade agreement, not against it, would be admissible.

The global anti-capitalist movement has a long history of opposing these international agreements. In 1998 activists organised internationally and very quickly built a mass campaign to stop the Multilateral Agreement on Investments (MAI), which contained many of the same undemocratic provisions such as investor protection.

The last great round of trade negotiations, the WTO’s Millennium round, was scuppered following the mass protests during the summit in Seattle in November 1999, which brought the anti-capitalist movement to international attention.

Many of the proposals contained in TTIP are a cobbling together of proposals that have been defeated by mobilisations in the past.

There are now national platforms in active resistance to TTIP in over 20 European countries, as well as coordinated strategies for opposition at the continental level. The labour movement in all major European countries has come out against TTIP, with trade union confederations in the UK, Germany, France, Austria, Belgium, Luxembourg, Spain, Italy and Slovenia all publicly in opposition to the continuation of negotiations.

This month will see mass protests against TTIP in 700 locations across Europe and the US. It is time this movement burst into the public spotlight again. 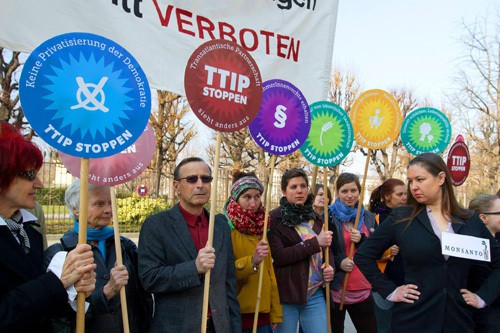 TTIP of a dangerous iceberg

The End of Subsidies Will Not Solve Poverty