TTIP of a dangerous iceberg

This article is over 7 years, 3 months old
September’s Trades Union Congress committed itself to “outright opposition” to the TTIP trade deal, now being drawn up in secret between the European Union and US. And for good reason.
By Peter Robinson
Downloading PDF. Please wait...
Wednesday 01 October 2014

The Transatlantic Trade and Investment Partnership, which could unleash devastating attacks on jobs, public services and the environment. Its main focus is not to reduce trade tariffs between the US and EU, which are already minimal. Instead the danger lies in its attempts to reduce “non-tariff barriers to trade”.

If agreed, it would be the biggest trade and investment deal agreed outside the World Trade Organisation (WTO).

WTO trade negotiations stalled in 2001 after they became the focus for mass protests. Since then big economic players have tried to push their agenda through bilateral trade deals and investment treaties such as TTIP.

The deal aims to make it easier for global firms to sue governments for “interfering” with profits by, for example, passing safety regulations.

Environmental and food safety standards could be under threat through “regulatory harmonisation”, while public services such as the NHS could be forced to undergo privatisation through deregulation and the liberalisation of public procurement.

What’s in it for the bosses?

TTIP has been called “the cheapest stimulus package imaginable” and its backers see it as a chance to boost economic growth following the economic crisis that began in 2008.

Banks and financial speculators are keen to get rid of even the small steps taken to rein in big finance since the financial crash. These rules are now threatened by TTIP.

The Centre for Economic Policy Research (CEPR) has suggested the EU’s annual economic output could rise by 0.5 percent by 2027 as a result of the deal. This figure has been widely challenged with any real gains being dismissed as “trivial”.

Even former Tory minister Ken Clarke, in charge of TTIP at the time, admitted the figure is not credible.

The CEPR has recognised between 1 and 2 million EU and US workers would lose their jobs as a result of the deal.

And an impact assessment by the European Commission predicted adjustment costs would be “prolonged and substantial” resulting from the displacement of labour.

US trade unions have warned about the cost in jobs. The North American Free Trade Agreement between the US, Canada and Mexico, introduced by Bill Clinton in 1994, caused the loss of almost 1 million US jobs and a drop in wages and conditions for millions more.

One aim of the TTIP deal is to open the EU up to US companies involved in fracking for shale gas. These companies would gain access to a massive new market while the EU hopes to benefit from cheaper fuel.

The US is also demanding the EU drops its Fuel Quality Directive, which bans the import of oil from Canada’s environmentally catastrophic tar sands project.

The deregulation of public services is the big prize, however. US health multinationals have always been keen to get their hands on the NHS’s £80 billion annual budget. And it was recently confirmed that health, education, post and even sewerage will be included in the TTIP negotiations.

Audio visual services have been excluded at the insistence of the French government, which wants to protect French cinema.

Labour’s Andy Burnham says TTIP would be a disaster for the NHS and has called for health to be excluded.

“Regulatory harmonisation” would lead to a race to the bottom regarding food safety standards. EU regulations would be undermined as US standards are far less stringent than those in Europe. This could enable products that are banned, such as hormone-treated beef and pork, to be sold in the EU.

The deal could also lead to greater marketing of genetically modified food and branded seed which is owned and controlled by the major agribusiness corporations such as Monsanto and Cargill.

Investor-state dispute settlements (ISDS) give global firms the right to sue governments if they pass laws or implement regulations which might reduce a company’s profits. The outcome is then determined by international tribunals run by corporate lawyers.

The EC suspended negotiations on ISDS in order to undertake a six-month consultation with the public. They received a record 150,000 responses which overwhelmingly called for ISDS to be removed from the deal.

The EC has now insisted the consultation was only about how to improve the ISDS provisions. The German government has now come out in opposition to the inclusion of ISDS.

Can we beat TTIP?

Trade deals have provoked mass resistance before. The Zapatista movement in Mexico in 1994 came about in response to the introduction of NAFTA.

The anti-WTO protests in Seattle 15 years ago saw an alliance of “teamsters and turtle kids” which catalysed the anti-globalisation movement and put workers at its heart.

We will need to build a similar alliance to stop TTIP and prevent other trade agreements from being passed behind our backs.

The huge climate change demonstrations last month gave us a reminder of the potential of that movement. 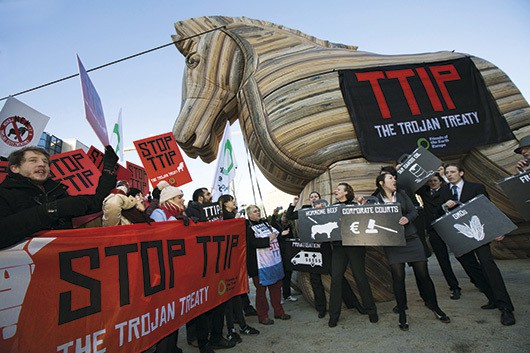