Imagine the Daily Express has turned into a TV news station fronted by Sun columnist Richard Littlejohn, and you begin to get an inkling of how rabid Rupert Murdoch’s Fox News TV is. Fox works very simply and repetitively both as a mouthpiece for Murdoch’s own right wing views and as a rolling election broadcast for George W Bush and the Republican Party – hardly a surprise when you learn that the channel head is Roger Ailes, a former Bush Snr campaign strategist.

In Outfoxed director Robert Greenwald, maker of recent anti Iraq war film Uncovered, effectively demonstrates that Fox aims not to present news, but to parcel right wing comment and political bias so it can masquerade as news. Greenwald, aided by teams of volunteers who worked for six months to monitor the channel’s output (and thus deserve medals), makes effective mockery of the channel’s hilarious slogan ‘Fair and balanced’. In a film that is revealing and at times very funny, we are treated to the system of daily internal memos produced in head office which set the tone and angle for reporters to follow. One such memo suggests, ‘Let’s refer to the US Marines in the foreground as “sharpshooters” not snipers, which carries negative connotations.’ Newsreaders are instructed to repeat the bizarre question/accusation, ‘Does Kerry look French?’

The film, produced chiefly for a US audience in an election year, shows how in the ‘one on one’ interview slot Republicans were four times more likely to appear than Democrats. ‘Consultants’ invited on shows to dispense their professional knowledge are precisely that, consultants paid a retainer and working under contract to Fox. When ‘liberals’ were interviewed they were generally unknowns or what one ex-producer called ‘faux-liberals’ who ended up endorsing much of what presenters were arguing.

The best piece is when Personal Story presenter Bill O’Reilly invites on Jeremy Glick – the son of a port authority worker who died on 9/11 – and berates him for his anti-war activism and for disgracing his father’s memory. Glick refuses to be intimidated, and bounces back with a clear political response to O’Reilly’s garbage, leaving the slick bully struggling for words. It is great TV and sharply highlights a different problem that the Democrats have, and which unfortunately Outfoxed fails to address. The Democrats’ main problem is not their lack of TV coverage, but their lack of anything different to say when they have coverage.

There are other weaknesses. The film relies too much on male talking heads, and seriously lacks a wider historical and political context about how corporately owned the entire US media has become. Overall, though, the film is entertaining and informative, and ends with suggestions of what people can do to campaign against Fox and crappy journalism. The best recommendation for Outfoxed comes from Fox News journalist Eric Shawne who wrote, apparently without irony, ‘It’s unfair, it’s slanted and it’s a hit job. And I haven’t even seen it yet.’ 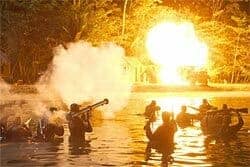 The Company: On the look out for some much better company