This article is over 12 years, 3 months old
Despite the huge outcry following the multi-billion pound bank bailouts, the mainstream parties still thought they could win support competing over who could make the deepest cuts to the public sector.
By Ray Watt
Downloading PDF. Please wait...
Saturday 01 May 2010

How can we build the strength and unity to resist the coming attacks? We could take the strategy used in Ireland, where the unions went along with the cuts despite popular anger. Or we can build on the Greek strategy, where outrage has been galvanised by the rank and file, forcing unions to call general strikes.

Following January’s Right to Work (RTW) national conference in Manchester, 30 people who attended from Edinburgh returned to build a local rank and file campaign of solidarity and resistance.

We started by calling an Edinburgh RTW launch meeting which 28 people attended. Everyone got copies of the RTW founding statement and we talked to people and got contact details. Our meetings are open and decisions are taken by majority agreement. This approach has shown that some of the old sectarian barriers can be broken down.

We contacted all perceivable organisations and our only point of required agreement was support for the RTW statement and aims. Edinburgh’s TUC and Unite branches and Edinburgh University Students’ Association then affiliated.

This quickly brought in others. For example, the Support Workers Action Network – a social care network of workers, service users and the community who won against Edinburgh council’s attempt to put elements of social care out to private tender.

Activists involved with the bin workers’ dispute also came along. Edinburgh RTW now supports the bin workers’ picket at 6am every Saturday, as well as building a campaign for the reinstatement of a bin worker sacked during the dispute. We encouraged the solidarity from the PCS and RMT disputes, leading to the largest bin workers’ picket being attended by over 100 people. We had union flags and banners, and got coverage in the local paper.

We called a public meeting, “Defend Our Public Services”, attended by over 50 people. Not huge numbers, but significantly the vast majority were from other campaigns, and new union activists came along. We were able to have a speakers’ platform that included regional executive members from the PCS, RMT and FBU, the president of Edinburgh University Students’ Association, and spokespeople from campaigns around asylum seekers, voluntary workers and bin workers.

Connections made with the RMT and PCS were crucial as only weeks later we were in a good position to build support for their disputes and so were not strangers on the picket line. We took collections and helped them leaflet. Then we were able to take a group of bin workers from their picket line up to the RMT picket line on the same day. A collection which had been taken at our public meeting was given to the RMT shop stewards, who quickly handed it over to the bin workers’ hardship fund. We also went to meetings against the closure of community centres, and supported the recent Unison and EIS teachers’ union demos where our argument about a general rank and file campaign against the cuts went down well.

Today we have a steering committee of 15 people, including representatives from PCS, RMT, Unite, Unison and UCU unions, student and community activists and representatives from organisations such as Stop the War, Unite Against Fascism, the Scottish Hazards Campaign Group and others. The steering group will maintain contact between all the networks involved, allowing us to act quickly and effectively wherever solidarity is required. It is always open to representatives of other organisations, and has agreed to meet once a month. But the key is that all remain connected and carry the argument of Edinburgh RTW through their networks. We also set up RTW activists meetings to ensure we have activity on the ground.

We still have a long way to go, but in just three months we have new roots in the working class. As the saying goes, “From little acorns great oak trees grow.”

We need to leave the starting blocks in our race to defend against the cuts – not from the position of union agreements as in Ireland, but based on a rank and file movement with the potential to turn Britain into another Greece. 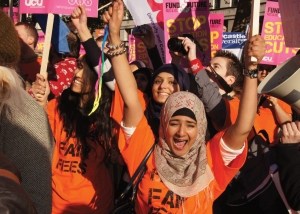