View from a Gantry

This article is over 17 years, 7 months old
Review of 'The Inheritance', director Per Fly
By Sarah Ensor
Downloading PDF. Please wait...
Saturday 01 January 2005

A young golden couple live the good life in central Stockholm. Maria, an actor, is beginning to be offered lead classical roles in the national theatre. Her husband Christoffer is a successful restaurateur and they have just found, between Maria’s performances, the perfect spot for a new restaurant. They are a partnership and love each other very much. Then Christoffer’s father turns up unexpectedly at their flat and sets off a chain of events that leads both of them to do the exact opposite of what they wanted and planned.

Christoffer is emotionally blackmailed into running the family steel mill back in Denmark. Nine hundred jobs are at stake and he believes that as a decent man he can run his family’s slice of capitalism better than the weak and selfish characters around him. In effect he is taking part in a minutely observed experiment whose outcome will be violence, recriminations and even more wealth.

Christoffer learns that those who own the means of production don’t behave the way they do because they’re all puppy-drowning bastards. Their interests are just diametrically opposed to those who work for them. Meanwhile, Maria discovers that the womanly role she thought consigned to her mother’s generation, or those without her talents, persists because it still serves a purpose. No one expects her to cook or clean but she is meant graciously to entertain the company’s clients and make their families comfortable. She is ‘oiling the wheels’. If she cannot do that, she is practically irrelevant.

This is the second part of Fly’s trilogy about class in Denmark. The first film, The Bench, was set in the working class and defined his approach of having the audience see the world more or less only through the main character’s eyes. So in The Inheritance we trail after ‘old money’, people who have been rich for generations and have all the possible benefits of education and security. They have uniformed servants and summerhouses. They are cultured and multilingual, moving apparently effortlessly between one Scandinavian country and another. From their point of view, of course, their workers are beneath them.

In fact the family/management make announcements from a gantry at least five metres above the assembled crowd. The workers passively accept bad news by letter, comforting each other at redundancies. There are no unions or collectivity here, so individual workers can only appeal to their length of service and their relationship to the family. In return Christoffer absolves himself of all responsibility because his behaviour, he reasons, is necessary to save the company.

There is a fly on the wall documentary quality to the camerawork that makes it very intimate. Despite the artifice of the improbably passive workforce, we see a believable unwrapping of the motivations and tactics of rich industrialists. Those of them who are clever, determined and utterly ruthless will win because they are better informed and organised than other industrialists and their own workers. 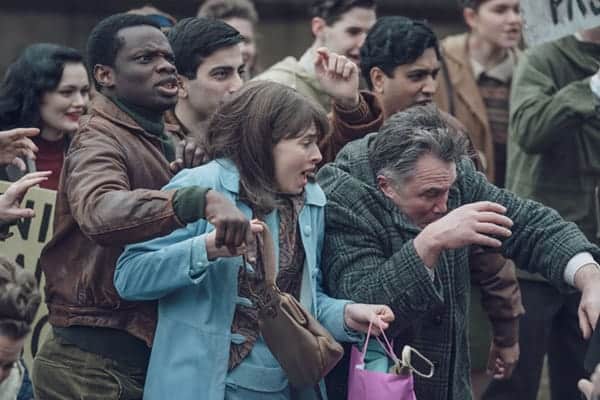