He concludes by saying that we need to build the ‘biggest possible anti-war movement–and then argue within it for an anti-capitalist agenda that confronts the system as a whole’. Given the hysteria over asylum seekers, it strikes me that we have to begin doing both at the same time.

As Chris acknowledges, and as Julie Waterson’s following piece (‘Beating the Bigots’) shows, the BNP are homing in on the issue in the run-up to the May council elections. Unless we get behind a campaign of exposing the lies and myths they feed on, the Nazis are poised to make significant gains.

More than anything else, it is war that creates asylum seekers. By campaigning against war, we should necessarily be campaigning for the defence of asylum seekers. The Committee to Defend Asylum Seekers has encouraged anti-war protesters to carry ‘Stop the War on Asylum Seekers’ placards and wear our badges. We have also pressed for anti-war activists to sign our open letter to the press condemning the racist hysteria and to help us raise the £io,ooo-plus to pay for it. Copies of the statement can be downloaded from www.defendasylum.org

The anti-war movement is the greatest the world has ever known. Let’s make sure it is directed towards taking on the system that creates war, and the countless victims of war, as quickly as possible. 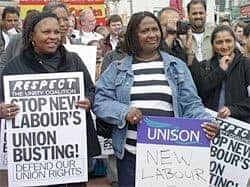