It seems that rumours of the death of fringe theatre have been somewhat exaggerated. Despite complaints–many of them justified–regarding the huge growth in the number of substandard stand-up comedy shows on the Edinburgh Festival Fringe, this year’s event still found the world’s biggest arts festival doing what it does best, responding creatively to international events.

The 11 September attacks and their aftermath were the theme of numerous productions. Inevitably, most hype was reserved for the arrival in Edinburgh of left wing American movie actors Susan Sarandon and Tim Robbins to present their performed reading of ‘The Guys’, Anne Nelson’s piece about New York firefighters.

The drama, which Robbins describes as a ‘document’ rather than a play, is based upon journalist Nelson’s experience of being asked to help a New York fire captain write eulogies to eight of his men who died as the Twin Towers collapsed. It is often touching in its consideration of loss and the need for collective grief.

However, Nelson’s desire to retain the immediacy of her text, which was written soon after 11 September, leaves the piece seeming a little ragged and incomplete. The writing and the structure of the piece need attention. Although Sarandon and Robbins (and other live theatre casts) have been happy to perform it as a reading rather than a fully staged play, I suspect that the director of the feature film of ‘The Guys’ (which will star Sigourney Weaver and Anthony LaPaglia) will want to make some changes.

While the media circus went into overdrive for the American movie stars, other, more accomplished, pieces of 11 September related theatre had to make do with more humble press coverage. They included an undoubted Fringe highlight, ‘Victory at the Dirt Palace’ by young US ensemble company The Riot Group.

The group won a prestigious Scotsman Fringe First award in 1999 for their brilliant and sharp satire of modern America, ‘Wreck the Airline Barrier’. Their latest play saw them pick up the award again. Interweaving references from Shakespeare’s ‘King Lear’ with the story of rival US news anchors James Mann and his daughter Kay, the piece takes us into the TV ratings war which followed the 11 September attacks. Satirising much more than just the US news media, the play has the same kind of complex, darkly humorous and politicised writing that made Wreck such a success.

The extraordinary, full-force acting of the piece also saw the company nominated for theatre newspaper The Stage’s award for best ensemble. Full of well directed rage and sharply observed, often expletive-laden language, Victory at the Dirt Palace is not for those of a nervous disposition, or ‘Daily Mail’ readers. Look out for a possible British tour of this superb piece in 2003.

If the Americans provided most of the 11 September themed drama, there were also attempts to come to terms with the implications of the attacks by British writers. Most notable was Steven Berkoff, whose performance poem ‘Requiem for Ground Zero’ took the Assembly Rooms by storm. Like his famous acting style, Berkoff’s text is muscular, poignant and comic. It considers the normality of the September morning on which so many people went unknowingly to their deaths, powerfully evoking memories of the desperate mobile phone calls and answering machine messages from people in the hijacked planes.

Some will, no doubt, consider Berkoff’s bold outlines, both of the events and the players in them, to be mawkish or over the top. Yet in the midst of his impressive physical performance, there are many moments of touching humanity.

As ever with Berkoff, there are also moments of real ambiguity. His reference to the conflict within Palestine is politically oblique, to put it mildly. Yet when he comes to the subject of the US and British governments’ responses to 11 September, the piece becomes much more pointed and politically charged.

Bush as a cowboy and Blair as a priest are already established satires, but Berkoff breathes superb new life into them. The blinking and bleeping of US communications technology makes us think of the Afghan civilians, without phones and silent in death, blasted by the US and British military machines. Similarly, as Berkoff’s Bush describes the full panoply of military hardware at his disposal, the contrast between the power and wealth of the US and the poverty of its intended victims looms large. He ends Bush’s tirade with the brilliantly direct words, ‘And then we’ll see who’s got the biggest hate.’

‘Requiem’ is a powerful, emotive and, finally, political response to 11 September. Following its Edinburgh success, audiences elsewhere should be given the opportunity to experience it. 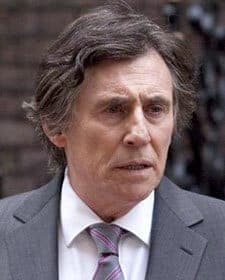