This article is over 19 years, 3 months old
The countdown to war has begun.
By Editorial
Downloading PDF. Please wait...
Tuesday 01 October 2002

In his holier-than-thou style Blair presented to parliament what he claims to be compelling evidence that Iraq is a threat to world peace and stability. In words that would have made his master in the White House glow with pride, Blair assured us that ‘regime change’ and military might are needed in Iraq, with or without the consent of the UN.

We devote a large part of this month’s Socialist Review to exposing the hypocrisy and half-truths of the Blair dossier. We hope the arguments that we present here will contribute to a mass movement to stop the warmongers in Downing Street and the White House.

This is the fifth military adventure that Tony Blair has launched since coming to power in 1997. Each was proclaimed as leading to a better world. A quick look at the world today exposes a very different reality. Unemployment, poverty and deprivation stalk large parts of the world, including major industrial countries like the US and Britain. It is little wonder that many people have profound doubts about this latest military action and are asking serious questions about it.

Our gung-ho prime minister is straining at the leash to attack. But in the haze of military glory he has forgotten one simple tactic–beware of opening up another front if the first battle has yet to be won. Blair’s recent comments that the firefighters’ pay demand will lead to a hike in mortgages shows the contempt he has for one of the most important groups of workers. It also exposes to millions of people the real Blairite agenda. He claims to be aware of the concerns of ordinary people–maybe he should try to live on £21,500 a year, pay a mortgage, bring up children, and shuffle debts to make ends meet. Have we ever once heard Blair attack bosses when they award themselves bonuses and pay rises that the rest of us can only dream about?

In 1997 and again in June 2001 we were promised things would get better. Yet little has changed. Any investment, whether it be for the London Underground or for schools and hospitals, ends up being a profits feast for the fat cats and cuts in wages for the workers. We never hear Blair say we may not be able to fight a war because it’s not cost effective, or it must be done through a PFI scheme.

Fortunately these are the issues that are now being raised and are feeding into the growing anger against New Labour. A hot autumn of strikes is now shaping up. At the same time as firefighters are balloting for action we are also seeing strikes on the London Underground and among university workers. There is further action planned by bus and train drivers, as well as a council workers’ strike in London and a national lecturers’ and support staff strike. On top of this London teachers could strike over London weighting. Combined with this rising level of militancy comes news that public sector unions have called for a halt to the government’s PFI programme and are threatening action against privatisation. This represents a significant shift in the level of industrial unrest and makes the political climate incredibly volatile.

Tony Blair, along with his pals in the White House, may have calculated that a war against Iraq is winnable. But he has failed to take into account the seething anger and resentment from millions of people at home. There is now an urgency to turn this anger into a mass movement against the warmongers, and use this to build a better world, where the prospect of military intervention and recession are a thing of the past.

Palestine: Voice of the Silent Majority 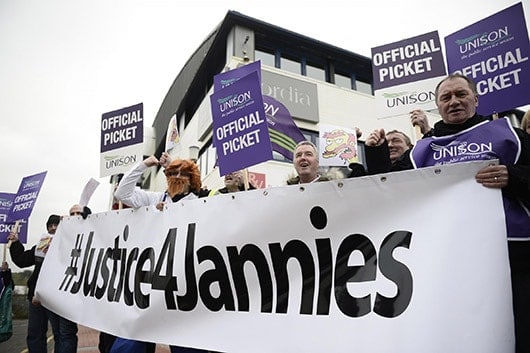 The radical left after Holyrood