We Were Eight Years In Power

Ta-Nehisi Coates is currently one of the most sought after black writers in the US. He is a national correspondent for The Atlantic magazine and his previous book Between the World and Me (see November 2015 SR) won the National Book Award for Non Fiction. He has also turned his hand to fiction, writing a series of Black Panther books for Marvel Comics. More importantly, his work brought him to the attention of Barack Obama and he became one of a group of journalists invited to a series of off the record sessions during the latter’s presidency.

We Were Eight Years In Power comprises a number of articles written by Coates during that time. They are knitted together by a series of introductory comments which reflect upon his own development as a writer and assess the achievements of Obama’s administration.

Following its publication the book came in for some heavy criticism from the revered black professor Cornel West. Writing in the Guardian, he dismissed Coates as “the neoliberal face of the black freedom struggle” and argued that his worldview is “too narrow and misleading”.

At the centre of that worldview is a belief that white supremacy characterises and dominates the United States. This theory runs throughout the book and is discussed at length in an epilogue which analyses Trump’s rise to power and first months in office. West’s major criticism is that this “omits the centrality of Wall Street power, US military policies, and the complex dynamics of class, gender and sexuality in black America.”

Given the book’s subject matter and title, a key consideration is Coates’s assessment of America’s first black president. One can understand why commentators would wish to rally round Obama particularly when set against the loud-mouthed sexual predator and racist who succeeded him. Compared with a president who described a number of African countries as “shitholes” on the day these words were written, Obama was always unfailingly polite and urbane. It is easy to see how one would be charmed by someone who hung out with Beyoncé and Jay Z, danced to Drake and publicly mouthed the words to Al Green’s Love and Happiness.

Obama was also prepared to engage with his critics rather than dismiss their concerns as “fake news”. Attendees were invited to challenge him during those White House sessions and in his final years so too were the leading figures in the Black Lives Matter movement.

It would be churlish to suggest that Obama achieved nothing. Coates highlights Obamacare, changes in the justice system, efforts to dismantle the private prison system and the introduction of equality into the military. Compared with the hopes invested in Obama, however, this was so very little. West reminds us that the man Coates characterises as “a deeply moral human being” authorised 563 drone strikes, the dropping of 26,171 bombs on Muslim majority countries in 2016, the deaths of 550 Palestinian children and the assassination of US citizens without trial.

Coates is aware of Obama’s shortcomings, particularly when addressing issues of race and exclusion, and is at times highly critical of a president he characterises as conservative. He refers repeatedly to an episode at Morehouse College in 2013 when the president warned a group of black graduates that “there’s no longer any room for excuses”.

More importantly, Obama himself is aware of the limits of his achievements. In a telling exchange with Coates he remarked, “I think where I got frustrated at times was the belief that the president can do anything if he just decides he wants to do it.” He went on to add that he sometimes felt hurt at the criticism he received and felt like saying, “(Don’t) you think if I could do it, I (would) have just done it? Do you think that the only problem is that I don’t care enough about the plight of poor people or gay people.”

Obama has commented before on the limits of political office, notably in his pre-administration book The Audacity of Hope. But his pitch for office was “Yes We Can!” and his subsequent speeches repeatedly riffed on the greatness of the US and the endurance of the American Dream.

Given Coates’s central premise, the book’s title is odd, but perhaps deliberately provocative. Obama may have been in office, but it is clear that black people, the “We” of his title, were not in power. Nor does Coates seem to see a way forward. He presents “a case for reparations” but no real way of achieving them. He is dismissive of a left which “would much rather be talking about class struggles that might entice the working white masses, instead of the racist struggles those same masses have historically been agents and beneficiaries of.” He does not reject resistance, but suggests that it “must be its own reward”.

Ultimately his own ambition is “to write both in defiance of tragedy and in blindness to its possibility, to keep screaming into the waves — just as my ancestors did.”

Like the rest of the book, these words are nicely written but hopeless. 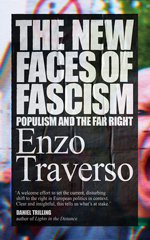 The New Faces of Fascism

Can We Trust the BBC?