Weapons: The Scoop That Didn’t Hold the Press

This article is over 18 years, 11 months old
Before the war, John Barry of Newsweek produced an amazing scoop. He obtained a leaked copy of the interview between General Kamal, Saddam's son in law, and the UN weapons inspectors.
By Solomon Hughes
Downloading PDF. Please wait...
Monday 01 September 2003

Kamal was actually in charge of Iraq’s weapons of mass destruction (WMD) programme – his defection to the west in 1995 caused panic in Baghdad. Every single assertion about Iraq’s WMD programme, every government dossier and major speech relies heavily on Kamal’s evidence. However, Barry showed that while Kamal exposed Iraq’s pre-1991 WMD programme – the chemical and biological weapons, the plans for nuclear bombs – he actually also said these programmes were destroyed after 1991, although some documents were retained. This authoritative and extraordinary evidence – that Saddam had no WMD and the west knew it – was either ignored or reported very patchily.

After the war, even after Saddam’s very obvious failure to use a single gas bomb or germ-filled rocket, the press were reluctant to say the whole WMD case was a fraud. However, when Dr Kelly approached the press, some journalists began to finally accept this story – his intervention could turn around a newspaper. A voice from inside the establishment is more persuasive for many journalists than any amount of evidence from the outside.

I had some experience of this after the US claimed to have found Iraqi ‘mobile bio-war laboratories’. A close reading of the CIA’s own report showed that even their evidence was hedged with qualifications, and Iraq’s claim that the vans were actually hydrogen generators, used to inflate weather balloons used by artillery for targeting, was at least a ‘plausible cover story’. Further research showed that artillery hydrogen balloons were quite common – Britain had sold Iraq an artillery hydrogen balloon system some years ago. A British firm even built a hydrogen generating van for the US military. I spoke to the Observer about this story, and was treated with interested scepticism. However, Dr Kelly, who was always unconvinced about tales of Iraqi mobile germ labs (he unsuccessfully asked for references to these to be removed from Blair’s dossier) approached the Observer. He was one of four Britons who had actually inspected the suspect trailers in Iraq. He also said the vans were not bio-labs. Scepticism turned to excitement, and the story ran: these were not the WMD ‘proof’. 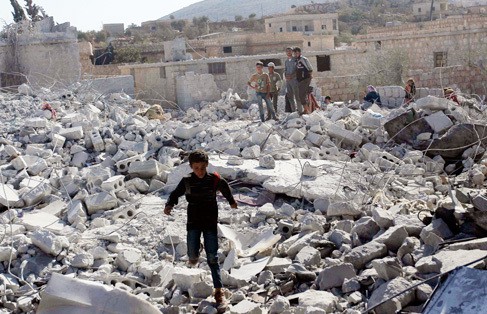 Eyewitness report on the legacy of the occupation of Iraq