Epic soundscapes, fearsome landscapes, and the meaning of life; the second season of Westworld opens with the same intensity with which the first one closed.

Dolores (Evan Rachel Wood), our hero, is on a bloody quest for justice and survival, having discovered that her repeated lives and deaths have all served to amuse rich humans at the Westworld theme park.

On the beach a tribal “savage” has his head scalped by a militaristic technician from the operations department of the Delos corporation, which owns this fantasy wild west playground where “violent delights have violent ends”.

From inside his brain is taken a baseball-sized computer.

In the first season the park’s creator, Dr Ford, had a change of heart and inspired the “hosts” — the androids who staff the theme park — to consciousness and rebellion. God is no more.

Some commentators have pronounced that in this season all heroes are dead because consequences in the park have become real. However, as madam Maeve Millay points out, surely the experience of being ripped apart from your loved ones leads to real feelings.

But the notion that there are no heroes is just liberals unable to stand by the oppressed when the response to a tortuous existence is as ferocious as the hosts’.

The hosts are more than just a synthetic mixture of good and bad, for it’s a mix that makes them into dynamic characters.

In contrast to the original 1973 film in which the hosts are simply programmed to play a particular role, in this series they have been programmed with complex backstories that put them on a journey, leading to a honeycomb of interactions.

Where are the good humans? In the first season, the most villainous character (he rapes Dolores in season one, episode one), the sadistic “Man in Black”, was revealed to have once been a young, sympathetic newcomer to the park. But then he went on to become the park’s biggest shareholder. In the new season Dr Ford makes clear this high stakes game is designed for him.

The Man in Black is the only human we are shown in real depth. Perhaps “everyday folk” are far from those who work in Westworld or its wealthy customers. It leaves you wondering if the show’s creators think humans are destructive by nature.

What we see is more than a rebellion of robots against humans. Once they start to break free from their programming the hosts do so in different ways depending on their experiences. They are not just a monolithic AI intent on the destruction of mankind, but individuals from different material conditions working together to varying degrees.

If you haven’t seen season one watch it now, especially if you can handle shifts in time during complex storytelling. Season two looks more straightforward so far, but we’ll see.

It is slightly concerning that Dolores seems to think she can see the future — but maybe that’s just a woke android coming to terms with her greater perception. Anyway, she sees things more clearly than other hosts do, her eyes fixed on the prize: overturning not just Westworld but the whole world. And she has begun by putting a stop to the undeserving, whether human or otherwise. 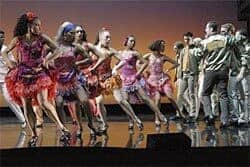 West Side Story: one hell of a production