What about the WorkERS?

This article is over 9 years, 5 months old
What is the state of relations between employers and workers in the UK? This is the question the latest Workplace Employment Relations Survey (WERS), which has just come out, aims to answer.
By Kevin Devine
Downloading PDF. Please wait...
Friday 01 March 2013

Conducted every seven years or so, the results are based on interviews with managers and trade union reps, and employees’ responses to a questionnaire. The latest study was carried out in 2011 and as such it presents a snapshot of industrial relations during the greatest recession of modern times, and permits comparisons with previous studies, conducted when the economy was arguably in better shape.

The study’s main strength is that it provides evidence that the employers’ are on the offensive over pay and conditions. One third of employees reported wage freezes or even cuts. And just under a third had experienced increased workloads.

What is striking, however, is that when it comes to action taken by management in response to the recession, the public sector appears to be far worse affected than the private. The initial findings contain a table comparing the two sectors. Ten out of 14 categories of employers’ actions, ranging from wage freezes to “other”, show more action in the public sector than the private.

But in so far as they try to pretend that it’s because “we’re all in it together”, or because the public sector needs to “share the pain” of the private sector, WERS helps give the lie to this false argument.

Exactly why the private sector hasn’t been affected more should probably be the subject of another article. Some of it might be connected to the phenomenon of “zombie companies”, but capital’s reliance on workers as the source of profits is also key to understanding why more jobs haven’t been lost.

There’s another aspect to the coalition’s stance. This is that they appear to operate with an assumption that the unions are finished as a social force. Now, while the actions of some union leaders have done little to disabuse them of this notion, it’s a bit wide of the mark. The second main strength of WERS is that it provides evidence for this too.

Previous WERS studies were hailed as evidence that collectivism and trade unions were a declining force in British society. But the previous survey, for 2004, showed that this decline had bottomed out. And while the latest one doesn’t show a recovery – which would be surprising given the pressure workers and their organisations are under – it does show certain signs of resilience.

WERS shows that 46 percent of employees work in a workplace with a recognised trade union. And while the figures for collective bargaining coverage in the private sector are low, some of this is due to the fact that the survey findings are predominantly based on smaller workplaces. In fact this is one of the study’s major weaknesses.

The reality is that a majority of large workplaces still have collective bargaining. There have been no major attempts at derecognition of unions. And despite the economic slump, two-fifths of organisations saw no changes to pay and conditions.

But of course the majority have seen some deterioration in real terms, and unions have failed to expand their membership during the worst recession in living memory. The pensions campaign debacle is probably a major factor here.

How might it change? Looked at in historical perspective, the current levels of union membership are not that low, and are higher than for almost the entire period prior to WW2 (the time of the ‘Great Depression’).

Of course, the workforce has grown since then, which is the reason why the proportion of unionised workers is lower. But you never know what’s around the corner, and if the unions are to grow again, they’ll most likely do so in the same way as they did before, by going on strike and winning. 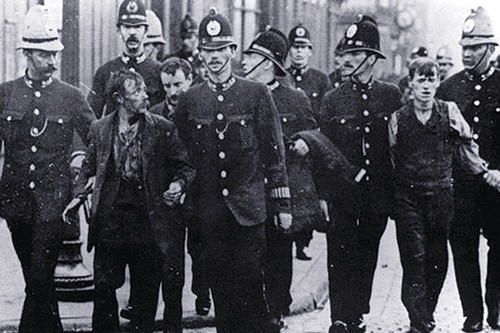 Covid-19 unleashes the economics of chaos

The battle and the war