What’s Lurking in the Shadows

This article is over 17 years, 8 months old
Review of 'Who Runs This Place?', Anthony Sampson, John Murray £20
By Sally Campbell
Downloading PDF. Please wait...
Saturday 01 May 2004

Forty years ago Anthony Sampson wrote Anatomy of Britain, a who’s who of the component parts of the establishment and the roles they played in running our lives. It became a bestseller on the shelves of students, academics and workers throughout the land. He has written updates since (as well as the extremely useful exposé of the oil industry The Seven Sisters), but this is the real follow-up.

Sampson was clearly prompted by two events to write this book now – the advent of the ‘Blair revolution’ and the Iraq war. It is up to date to the end of 2003, charting the unfolding of the Hutton inquiry.

In the big picture, he sees a vacuum developing in politics over the last 40 years: the old establishment – the ‘old boys’ network’ – and its adversary the trade union organised left have lost their power. The certainties of 1960s Britain have disintegrated and been replaced by a free market frenzy of ‘professionalism’ over ‘values’. He sees this as primarily beginning with Thatcher and the privatisations of the 1980s, but reaching a new level under Blair and New Labour.

Each chapter of this extremely informative book looks at a different aspect of the ruling class, from parliament and the monarchy through the secret services and defence to the media, academia, pension funds and corporations. Each carries a who’s who of the CEOs/cabinet secretaries/director generals, etc. The picture you get is of a ruling class that is still almost exclusively white, male and in its fifties. There has been a slight move away from public school and Oxbridge, though Sampson points out there has been a boom in independent schools in the last ten years, so we can look forward to a future generation of bosses and politicians who’ve never been near a comprehensive.

This book’s running theme is the concentration and increasing unaccountability of all aspects of the state and business. More and more MPs now rise through the system – starting out as researchers or full time party workers rather than as activists on the ground. The Labour Party has lost the roots it once had, and Sampson (who, incidentally, was a founding member of the SDP) sees Blair’s removal of Clause Four – the commitment to common ownership of the means of production – from the constitution as a turning point in the direction of the party. As Peter Mandelson once put it, New Labour is ‘intensely relaxed about people getting filthy rich’.

And filthy rich they have got: the Sunday Times began publishing its Rich List in 1988, and by 2003 it showed 1,000 people in Britain worth over £30 million, including 20 billionaires. Four of the 20 are old landed aristocracy; many of the rest are tax exiles from overseas. Most of the richest people in Britain made their money in their lifetime.

And this is a key point: Sampson draws a distinction between this ‘new rich’ and the old professions. Lecturers and civil servants, who back in 1962 may have been considered part of the establishment, are now suffering the same attacks on wages and conditions as the rest of us. His chapter on academia documents how the once solid world of the universities has melted into a global marketplace.

Sampson is clearly a good old liberal at heart, lamenting the loss of ‘checks and balances’ in the workings of government and the lack of ‘talent’ among today’s MPs. But his evidence shows what is really going on – the neoliberal agenda has been accepted by all the mainstream parties and power is moving up to more regional and international bodies such as the EU. However, the fact that Blair’s project came so close to being scuppered over the Iraq war highlights the fallacy that governments no longer matter.

This book gave me a real picture of the shadowy figures who hold the power and control the wealth in Britain today. The bit that’s missing is that other great wielder of power in this country: us. 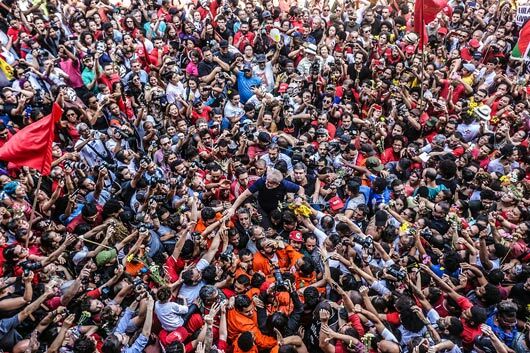