When the Gringos Go Down South

This article is over 15 years, 10 months old
These days the visitor crossing from the Mexican city of Tijuana to San Diego in California is immediately slapped in the face by a huge billboard screaming, "Stop the Border Invasion!" Sponsored by the rabidly anti-immigrant vigilante group, the Minutemen, the same truculent slogan reportedly insults the public at other border crossings in Arizona and Texas.
By Mike Davis
Downloading PDF. Please wait...
Sunday 01 October 2006

The Minutemen, once caricatured in the press as gun-toting clowns, are now haughty celebrities of grassroots conservatism, dominating morning hate radio programmes as well as the even more hysterical ether of the right wing blogosphere. In heartland as well as border states, Republican candidates vie desperately for their endorsement.

With the electorate alienated by the dual catastrophes of Baghdad and New Orleans, the Brown Peril has suddenly become the issue through which the Republicans hope to retain control of Congress in next month’s elections.

The faltering Republicans, too long sustained by the scraps of 9/11 and the imaginary weaponry of Saddam Hussein, are now appealing with new urgency to the suburbs. Not even Iran or North Korea, it seems, poses such a clear and present danger to the Republic as the sinister armies of would-be busboys and gardeners gathered at the Rio Grande river.

Indeed, to listen to some of these demagogues, one would assume that the Twin Towers had been blown up by followers of the Virgin of Guadalupe or that Spanish had recently been decreed the official language of the state of Connecticut.

Having failed to scourge the world of evil by invasions of Afghanistan and Iraq, Republicans, supported by many Democrats, now propose that we invade ourselves – sending the marines and green berets, along with the National Guard, into the hostile deserts of California and New Mexico where national sovereignty is supposedly under siege.

As in the past, nativism today is bigotry as a surreal caricature, reality stood on its head. The ultimate irony, however, is that there really is something that might be called a “border invasion”, but the Minutemen’s billboards are on the wrong side of the motorway.

What few people – at least, outside of Mexico – have bothered to notice is that while all the nannies, cooks, and maids have been heading north to tend to the luxury lifestyles of irate Republicans, the gringo hordes have been rushing south to enjoy glorious budget retirements and affordable second homes under the Mexican sun.

Over the last decade the US State Department estimates that the number of Americans living in Mexico has soared from 200,000 to 1 million (or one quarter of all US expatriates).

According to the Wall Street Journal, moreover, the “land rush is occurring at the beginning of a demographic tidal wave. With more than 70 million American baby boomers expected to retire in the next two decades… some experts predict a vast migration to warmer – and cheaper – climates.”

The extraordinary rise in US sunbelt property values gives gringos immense economic leverage. As in Galway, Corsica, or, for that matter, Montana, the global second home boom is making life in beautiful natural settings unaffordable for their traditional residents.

The gringo footprint is largest in Baja California, the 1,000-mile long Mexican desert appendage to the gridlocked state-nation governed by Arnold Schwarzenegger. In essence, Alta (upper) California is beginning to overflow into Baja, an epochal process that, if unchecked, will produce intolerable social marginalisation and ecological devastation in Mexico’s last true frontier region.

Indeed the first two stages of informal annexation have already occurred. Under the banner of the North American Free Trade Agreement, Southern California has exported hundreds of its sweatshops and toxic industries to the “maquiladora” (factory) zones of Tijuana and Mexicali.

Secondly, tens of thousands of gringo retirees and winter residents are now clustered at both ends of the peninsula. Along the north west coast from Tijuana to Ensenada, some 60 gated communities and resort villages, all aimed at the US market, are currently under construction.

At the tropical end of Baja, meanwhile a Yanquee “gold coast” has emerged in the 20-mile strip between Cabo San Lucas and San Jose de Cabo. Los Cabos is part of that global archipelago of real estate hot spots where continuous double digit increases in property values suck in speculative capital from all over the world.

The next step in the “gringoisation” of Baja is the “Escalera Nautica”, a $3 billion “ladder” of marinas and coastal resorts that will open up pristine sections of both Mexican coasts to the yacht club set. In the picturesque little city of Loreto on the Sea of Cortez, meanwhile, an Arizona company is building 6,000 homes for “nortreamericanos” in “the colonial style”.

One of the irresistible attractions of Baja is that it has preserved a primordial wildness that has disappeared elsewhere in the West. Thanks to the silent invasion of the baby boomers from the north, however, much of the natural history and frontier culture of Baja could be swept away in the next generation.

While the nativists rant and rave about immigrant day labourers in southern California, Manifest Destiny – with its megaresorts and mock colonial suburbs – is transforming some of the most magnificent parts of Mexico into generic tourist sprawl. 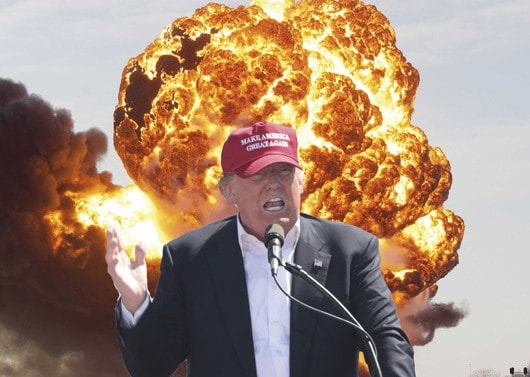 US primaries heat up on left and right