This article is over 15 years, 8 months old
Sometimes there are strange coincidences in history. One occurred last month. George Bush made an official visit to Vietnam just as leading figures in his own Republican Party were saying that the Iraq war had indeed turned into the new Vietnam. The US was in danger of a repeat of the ignominious defeat it suffered 31 years ago, and had to find a way of getting out of the morass.
By Chris Harman
Downloading PDF. Please wait...
Friday 01 December 2006

In both cases US imperialism overstretched itself, stirred massive opposition both in the occupied country and throughout the world, and faced the prospect of defeat as a hammer blow to its capacity to get its way globally.

There are, however, still people on the left who do not like the comparison. The resistance in Iraq, they say, is very different in character to the resistance in Vietnam, and therefore we should not want it to win. They point to the presence of both Jihadist and pro Saddam Hussein elements in the resistance, and to the horrific sectarian murders perpetrated by forces claiming to represent Shias and Sunnis.

All this seems very different to Vietnam, where the resistance was led by a secular party which spoke of socialism and was intent on uniting the country. But support for a movement for liberation should not depend on those who lead it at a particular point in time.

A trap many on the left fell into in the 1960s and 1970s was viewing through rose tinted glasses the leaders of the resistance in Vietnam – and those in many other countries. Those illusions should have passed long ago, not least because of the way those who rose to power out of the liberation struggle now welcome not just the mass murderer Bush, but also the multinational exploiters of which he is the political representative.

At the time of Bush’s visit a TV channel interviewed two women who, as teenagers, had been held in the US’s torture chambers during the Vietnam War. They had no doubts about how right it had been to drive out the US. But they were also scathing about the corruption of Vietnam today.

The same bitterness is to be found in the brilliant Novel Without a Name by the ex-resistance fighter Duong Thu Huong. One of her characters tells of those at the top during the war:

“When they need rice, the people are the buffaloes that pull the plough. When they need soldiers, they cover the people with armour, put guns in the people’s hands. When all is said and done, at the festivals, when it is time for the banquets, they put the people on an altar and feed them with incense and ashes. But the real food, that’s always for them.”

But neither in Vietnam nor elsewhere in the world was it necessary to have illusions in the leaders of liberation movements to support them against imperialism.

The mass of people of Vietnam saw war as final phase in a liberation struggle that had led them previously to fight French and Japanese occupying forces. The US’s involvement was part of its overall scheme to exploit peoples of the whole world, and there could not be any progress in Vietnam until it was defeated, even if the Vietnamese masses then had to fight their own rulers.

But that was not all. In weakening US imperialism, the Vietnamese struggle gave a boost to people fighting elsewhere – the black and women’s movements in the US, the rebellions against Portuguese colonialism in Africa and white rule in Rhodesia and South Africa, the struggles against fascism that still existed in Spain and Portugal, and the workers’ movements in Chile and Argentina, France and Italy.

The same logic applies in Iraq today, despite the attitude to women of some of the resistance groups and those whose religious bigotry leads them to direct their fire against other Iraqis as much as against the occupying troops.

The US’s attack on Iraq was motivated, in the words of those who inspired it, to secure “a new American century”. The victims of this would be those in the barrios of Caracas and the sweatshops of the Philippines, those suffering under the dictates of the IMF and those toiling for poverty wages to pay off the debts to Barclays and Citibank, those rotting in the prisons of Saudi Arabia or going hungry in sub-Saharan Africa.

By the same token, the resilience of the Iraqi resistance indirectly aids all those who would be next in line if the US were not bogged down in Iraq. This includes forces such as Hizbollah in Lebanon, and also those in Venezuela and Bolivia who are beginning to struggle to turn the dream of “socialism in the 21st century” into a reality.

In Iraq itself US imperialism has gone out of its way to nourish religious sectarianism. Divide and rule has always been a favourite tool of empire – Britain’s rulers turned Hindus against Muslims in India, Sinhalese against Tamils in Sri Lanka, and Turks against Greeks in Cyprus.

The US turned to the same method two and half years ago when faced with simultaneous uprisings from Sunnis in Fallujah and Shias in the south. It courted certain Shia figures while turning Fallujah into a killing field. And then, as if to encourage Sunnis to listen to the sectarian message of the jihadist Musab al-Zarqawi that all Shias were corrupt enemies, it distributed government posts to the most corruptible Shia notables.

There are forces on the ground in Iraq resisting the poison spread by the occupation. No one can guarantee they will ultimately be successful. But the precondition for them even having a chance is the removal of the sources of the poison – the occupying troops who get their orders from those who resort to any barbarity to stop their dream (and our nightmare) slipping away. 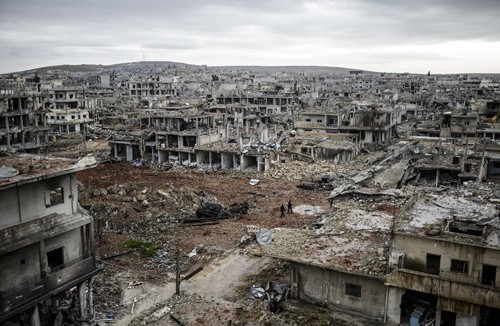 West gears up for more war in Iraq

A New Left is Born

Roll Out the Barrel