This article is over 9 years, 7 months old
Karl Marx and Frederick Engels were commissioned in late 1847 to draw up a manifesto by the Communist League, the first international working class organisation. The resulting pamphlet that calls on working class of all countries to unite has become an inspiration for socialists in every decade since.
By Irem Aksu
Downloading PDF. Please wait...
Tuesday 01 January 2013

It has been translated into more than a hundred languages. It is a historical materialist approach to history, a critique of capitalism and a guide to the international class struggle.

More than one and half centuries later the words of the preface to the 1872 German edition of the Manifesto remain applicable today: “However much the state of things may have altered during the last 25 years, the general principles laid down in the Manifesto are, on the whole, as correct today as ever.”

The major part of writing the Manifesto fell to Marx more than Engels. But Engels had written Principles of Communism earlier in 1847 and it formed the basis of the Communist Manifesto. This short document consists of 25 questions and answers, providing brief explanations on such subjects as how capitalism works; what is the proletariat; the nature of private property and the family, and so on.

In writing the Manifesto, Marx took over this question and answer form and rebuilt it as a much more comprehensive work.

The publication of the Manifesto coincided almost immediately with the beginning of a revolutionary wave across Europe. In February 1848 an uprising broke out in Paris and revolution spread rapidly across the continent.

The 1848 revolutions, though they were defeated, showed again that the “history of all hitherto existing society is the history of class struggles”, as the Manifesto puts it.

The Manifesto consists of four main parts. The first, “Bourgeois and Proletarians”, analyses the nature of capitalism and underlines its global nature: “the need of a constantly expanding market for its products chases the bourgeoisie over the whole surface of the globe. It must nestle everywhere, establish connexions everywhere.” It insists on the revolutionary role played historically by the bourgeoisie.

But this praise is double-edged. Marx and Engels were right. In the 17th and 18th centuries the bourgeoisie played a revolutionary role against the forces of feudalism.

But it also transformed the ways of producing into a new and brutal forms of the exploitation of labour. And bourgeois society’s drive to turn everything into a commodity for sale in the market influenced everything from property to the family.

By contrast, Marx and Engels saw the proletarians, the working class, as the only class powerful enough to overthrow the bourgeoisie and capitalism. It is a collective class brought together by the bourgeoisie in factories and mines (and in offices, schools and supermarkets today) and which lives entirely from the sale of its labour and does not draw profit from any kind of capital.

The second part of the Manifesto is “Proletarians and Communists”. Marx and Engels insist communists “have no interests separate and apart from those of the proletariat as a whole: “They do not set up any sectarian principles of their own, by which to shape and mould the proletarian movement.” What communists do possess is a clearer understanding of the “line of march”, that is the conditions and results of the class struggle.

Part three, “Socialist and Communist Literature”, is a survey of the various socialist tendencies of the time. Criticism of the new capitalist society and its associated horrors was fashionable. But much of this apparent anti-capitalism hid the interests of other classes, whether the old small middle class (the “petty bourgeoisie”) which feared its destruction at the hands of big capital or even from the old feudal landowning classes hoping to enlist workers in an alliance against the rising bourgeoisie. For Marx and Engels socialism is not just a good idea but expresses the interests of workers.

Finally, the Manifesto has a brief fourth part, which outlines the attitude of communists to other radical democratic movements. Every move in the direction of democracy is to be supported, but communists as the driving force towards a proletarian revolution must retain their own identity.

In 2008 a financial crisis in the US triggered a chain reaction that has shaken the whole world. The response of capitalism everywhere from the US to Europe has been austerity.

In response we have seen general strikes in Greece, Spain and Portugal. But today a spectre is not only haunting Europe, but also the Middle East.

The movement that began in Tunisia has spread to other countries in the region, in turn inspiring resistance from Spain to Wisconsin and Wall Street to South Africa.
The Communist Manifesto was published in a year of international revolution in Europe.

The future can bring defeats, but resistance and revolution are inevitable as long as capitalism creates its own gravedigger. The famous final words of the Manifesto, “Workers of the world, unite! You have nothing to lose but your chains”, remain our goal. 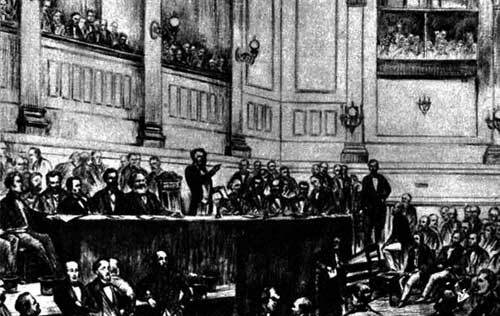 Can Marxism explain the crisis?