Why read…The Struggle Against Fascism in Germany

Trotsky wrote this series of articles in extraordinary times. Germany in the 1930s was hit by a massive crisis that crippled the economy and drove unemployment up to 6 million.

In the conditions of global recession a new movement, fascism, was rising in parts of Europe. In Germany this took the form of Adolf Hitler and his Nazi party.

Hitler exploited the fears of the ruling class on the one hand, and the petty bourgeoisie on the other. The ruling class feared the workers’ movement – the most powerful in Europe – and remembered how close Germany had come to socialist revolution in the years 1918-1923.

The petty bourgeoisie – smaller capitalists, shop owners and so on – were terrified that the economic crisis would destroy their savings and their livelihoods. Hitler played on these fears to win votes, while also using his storm troopers to unleash violence on his opponents in the streets.

Trotsky’s understood just how grave the threat was. Above all, his analysis showed how fascism could be fought. He explained how the deep social crisis combined with a lack of a credible revolutionary party could lead to Hitler seizing power.

The major workers’ organisations in Germany were the Social Democratic Party (SPD) and the German Communist Party (KPD). Trotsky argued that neither had the leadership required for a successful fight to defeat fascism.

The SPD’s leaders were reformists who had supported the First World War and betrayed the revolution that followed. The KPD was dominated by the politics of the Russian Communist Party now under the domination of Stalin. Its leaders denounced the SPD as “social fascists” and argued that, in order to smash fascism, it was necessary to smash the SPD first.

The KPD was growing, but the Nazi party was rapidly becoming a mass organisation capable of destroying all forms of democracy. The KPD’s sectarian tactics alienated them from those workers who still looked to the SPD.

Trotsky argued that it was necessary to recognise just how great was the threat he posed and then form what he called a “united front” to defeat it.

Trotsky called on the KPD to take a defensive not an offensive position. That meant “closing ranks with the majority of the German working class and forming a united front with the social democratic and non-party workers against fascism”.

He explained the united front simply: “The policies of our parties are irreconcilably opposed; but if the fascists come tonight to wreck your organisation’s hall, we will come running, arms in hand, to help you. Will you promise us that if our organisation is threatened you will come to our aid?”

This did not mean that Trotsky thought revolutionaries should water down or abandon their politics; far from it: “No common platform with the Social Democracy, or with the leaders of the German trade unions, no common publications, banners, placards! March separately, but strike together! Agree only how to strike, whom to strike and when to strike! Such an agreement can be concluded even with the devil himself.”

He was correct. By taking the lead, revolutionaries could show in practice that they were the best fighters. Rather than fencing themselves away, this would enable them to win workers, making them question their own leaders.

Trotsky knew that what was at stake was the “fate of humanity”. In a prophetic and chilling anticipation of the coming Holocaust he wrote: “Worker Communists, you are hundreds of thousands, millions; you cannot leave for any place; there are not enough passports for you. Should fascism come to power, it will ride over your skulls and spines like a terrific tank.”

Trotsky knew Hitler wanted to smash democracy. He knew that the war the Nazis would bring about would mean the defeat of working class if it failed to act.

Tragically he was right. The first thing Hitler did on seizing power was to ban the KPD and arrest its members. The KPD’s leader Ernst Thalmann, along with thousands of other communists, socialists and trade unionists, was murdered in the concentration camps.

Trotsky was hugely optimistic throughout his writings. He had an unshakeable view that the working class could defeat fascism. Writing in June 1933, after Hitler had seized power, he still believed revolutionary fighters could defeat the Nazis.

But don’t read his articles as just a historical work. In Britain from the 1970s up to today, first the Anti Nazi League and now Unite Against Fascism have shown time and again how building a united front to confront the Nazis has beaten them back.

Every anti-racist and anti-fascist should read it.

The Struggle Against Fascism in Germany, by Leon Trotsky is available from Bookmarks bookshop. 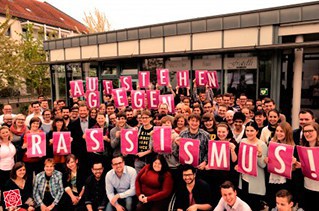 Germany stands up to racism