This article is over 19 years, 6 months old
Here is a draft letter we have done in Britain for the regional and local press. I hope everyone will write at least one letter to their local press, wherever they may live.
By Rae Street
Downloading PDF. Please wait...
Wednesday 03 July 2002

The increasing tension between India and Pakistan is of concern for all of us. Firstly it is a humanitarian question–already in the border region innocent civilians are daily being wounded and killed. If the conflict develops into full scale war, thousands of people would be killed with the deadly weapons which both sides have been acquiring. In our area of Greater Manchester this is made the more fearful as many local people have relatives in the region.

But if that were not enough, both sides now have the capability to launch nuclear weapons. No one should ever forget what suffering was caused when the US dropped the first nuclear bombs on Hiroshima and Nagasaki. Over a quarter of a million innocent people were killed (burnt alive or died painfully from radiation sickness), or maimed by bombs which by today’s standards were relatively small. Exploding large scale nuclear bombs today could bring unknown pollution and radioactive contamination to wide regions of the world.

What can we do? We can speak out for continuing negotiations and against resorting to war. We can demand that our government stops selling arms to the governments in the region, and this of course is part of a wider campaign to reduce Britain’s arms manufacturing and sales. Weapons fuel wars.

Above all, we can work even harder to ensure that the nuclear weapons states, in particular the UK and its ally the US, which has the largest nuclear arsenal in the world, comply with their obligations under the UN treaties to disarm and at the same time work for a verifiable global ban on nuclear weapons. Britain cannot keep the four US-designed Trident nuclear armed submarines (each with 4,000 times the killing power of the bomb at Hiroshima) and claim we need them for deterrence while saying we would be prepared to use them (in a statement by the minister Geoff Hoon), and then lecture India and Pakistan. Our government must live up to its claim that it has an ‘ethical foreign policy’, stop saying, ‘Do as we say, not as we do’, and scrap the UK’s nuclear weapons. Nuclear arms do not deter ‘terrorists’–they do not stop war and conflict. Nuclear weapons are deadly dangerous and threaten the security of every single person.

Stand with migrant workers for good pay and conditions 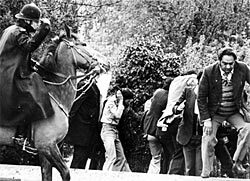