Windrush: Movement of the People

Racist Tory politician Enoch Powell is well and truly nailed for his “politics of the gutter” in this triumphant celebration of Caribbean migration.

It comes as we hear words from Powell’s vile “rivers of blood” speech made in 1968 which whipped up hatred up over immigration, predicting that black people will gain the “whiphand”. Ten years before Powell was the minister who had initiated such migration to solve Britain’s post-Second World War labour shortage.

A voiceover denounces Powell for making gutter politics respectable — a timely reminder when some have perversely proposed erecting a blue heritage plaque to his foul memory.

The section is one of the highlights in Sharon Watson’s moving creation charting the journey made by the first wave of migrants who arrived over 70 years ago on the Empire Windrush.

We are greeted by a set made up of a huge pile of suitcases and trunks against the backdrop of a beautiful sunny sky. Men and women wait on the dockside. The soundtrack announces, “You called, and we came.” They arrived for a new life, filling jobs and helping the motherland.

A transformation takes place from the optimistic opening. The dancers tense, uncertain of the new grey surroundings. The soundtrack portrays that they do not belong. Women who had been matrons are now demoted to nurse. In turn nurses became chambermaids or cleaners. But there was no going back.

As the packing cases turn into cramped houses, grey-masked landladies hang washing on clothes lines. Each item bears a letter, spelling No Irish, No Dogs, No Blacks. It brutally conveys the racist message of its time.

But Watson also shows how times change, reflecting the anti-racist struggles of the 1960s and 70s, when black culture makes its mark through dance, Gospel, calypso, ska and reggae, which together would help shape multicultural Britain.

Phoenix’s ten dancers, with a set and costumes by Eleanor Bull, skilfully evoke the “change that’s gonna come”. Original music is by Christella Litras and the Caution Collective, with tracks from Seal and even Jim Reeves.

The final scene is a family group, dancing on stage as members of the audience join in. As with the One Day Without Us campaign, the message is: here to stay.

Dissecting the system that carves up the globe

A Case of Exploding Mangoes 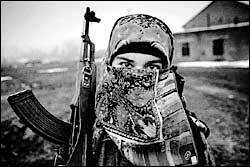