Just over a year ago the uprising in Wisconsin began in response to Republican governor Scott Walker’s union-busting bill.

Exciting as the topic is, this is only four weeks of history and with none of the 18 contributors having consulted each other, as the editor makes clear, inevitably it covers a lot of the same ground. Lee Sustar paints a fascinating portrait of the makeup of the movement. He gives descriptions of individual protesters, such as Jerry Thompson, a union member for 52 years, who says to the crowd “I am retired, but I want to be here because of solidarity.”

He describes ironworkers and fire fighters holding up their union cards and explaining what this fight and what being a union member means to them. Sustar also questions who the real leaders of the movement were when the union leadership failed to step up. He credits the occupation of the Capitol in Wisconsin as opening the way for Occupy Wall Street.

Many of the authors view Wisconsin as important in awakening class consciousness but suggest it could never have moved beyond a certain stage because it was so new.

Implicit in many of the articles is the idea that anger could not have been channelled into a state-wide general strike because it was beyond the infrastructure of the unions. Perhaps so, but there remains an inherent conservatism in this. I think more credit should be given to Wisconsin than just as a stepping stone to other movements in the US.

What made Wisconsin so significant was that the potential for an all out general strike was there, as some writers acknowledge. The chant of “General Strike” re-emerged in Wisconsin after having been long absent from labour struggles in the US.

Stephanie Luce, for example, rejects the view that this was a purely spontaneous movement and draws attention to community groups, activist networks and the history of labour movements in Wisconsin. Though they may not have been strong, such structures were present.

The final section of the book is devoted to broadening the struggle beyond Wisconsin. Michael Yates writes: “No meaningful solidarity with workers in the rest of the world is possible if we support the US war machine. As capital penetrates every corner of the earth, no labour movement can survive unless it has an international perspective.”

The word revolution isn’t mentioned in the book, even in relation to Egypt, and there is a noticeable lack of any role played by the revolutionary left. But without a revolutionary socialist party embedded in the unions and within the rank and file movements will build quickly without finding a direction to go in.

Chants, crashes and a dot.com 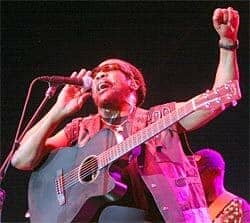 Talking with Toots: a great reggae pioneer who still packs a punch