Workers’ unity in the face of Enoch Powell’s racism

This article is over 14 years, 4 months old
Socialists watched in despair when dockers and building workers marched in support of Enoch Powell's "rivers of blood" speech. But the tide turned and a few years later dockers were marching for Grunwick strikers.
By Chris Harman
Downloading PDF. Please wait...
Tuesday 01 April 2008

This year the left will be commemorating the events of May 1968, when students and workers rose up in Paris.

But those events were preceded in Britain by a dismal affair. The gutter press and right wing politicians launched a huge campaign against Asian families fleeing persecution in East Africa. The Labour government and nearly all the Labour MPs joined in. They pushed a bill through parliament in just one day, removing the right of Asians to enter this country even through they held British passports.

It was after this that Tory MP Enoch Powell made his notorious “rivers of blood” speech, attacking not just prospective immigrants but anyone with brown or black skin who was already settled in Britain. The week that followed was possibly the most distressing that those of us who were socialists had experienced – groups of building workers, meat porters and then London dockers took part in one-day strikes and demonstrations in support of Powell.

To many people it seemed that the white working class was irredeemably racist – a myth propagated today by talk of “white workers” feeling they have “lost their culture”.

The reality shows 1968 was rather different. People rarely have one single set of ideas. In a class society, ruling class ideas penetrate to varying degrees into mass consciousness. But they have to compete with other ideas arising from the history of struggle against the ruling class. So within the British working class there was always a minority of about a third who embraced ruling class ideas and voted Tory, as against the majority who questioned some ruling class notions and voted Labour.

By 1968 the Labour government elected in 1964 had abandoned promises of positive reform under pressure from the City of London. It implemented a series of measures as appalling in their own way as anything done by New Labour.

Labour prime minister Harold Wilson supported employers against a seafarers’ strike for the 40-hour week. He praised the “peace efforts” of a US president who was dropping more bombs on Vietnam than had been used in the whole of the Second World War. His government pushed through welfare cuts and deflationary policies which raised unemployment to a level not known for a quarter of a century, and it enforced wage limits of 3.5 percent when prices were rising at 5 percent. Its aim, the Times reported, was “to cut consumption by 2 percent”.

Socialist activists who had put their faith in Labour were gutted. Labour had abandoned them. The demoralisation was particularly strong among the London dock workers, who had lost a nine-week strike only a few months before.

It was this that made it easy for the racist message to dominate. The racists turned reality upside down and blamed immigrants for low pay and bad housing. Appalling conditions that had always existed were blamed on those now suffering from them.

In the past, socialists and trade union activists had the confidence to challenge these ideas. But Labour’s behaviour in office had broken that confidence. The Labour leaders made things worse. Offering no hope to the mass of traditional Labour supporters, they came to the conclusion that the only way to get votes was to repeat the arguments of the Tory right.

This was the situation in which Powell believed he could develop a mass following on a racist programme. As a leaflet the International Socialists, the forerunner of the SWP, put out explained: “The ready response to his speech has revealed the prevalence of racialist ideas among workers, inculcated by centuries of capitalism and imperialism. Paradoxically it also indicates the extent to which people are fed up with existing society. They are disillusioned with established politics and have lost faith in the succession of leaders who have betrayed their trust. But instead of blaming actual enemies and looking for the real source of their frustrations, they blame the immigrants.”

The Powell poison had some terrible effects, but it was eventually contained.

Very important was the willingness in 1968, and again in the late 1970s, of individuals to organise against the racists. In 1968 students influenced by the wider revolutionary mood harassed racist politicians wherever they went. More importantly, they took the message to the streets and workplaces, making the connection between Powell’s racism and his general anti working class politics. In doing so they invariably found groups of workers who felt the same.

The years that followed saw the beginning of the biggest wave of workers struggle since the 1920s. This created a climate in which the politics of class could trump the politics of ethnic division. There still needed to be organisation to counter the racists’ arguments, but socialists were swimming with the stream, not against it.

Nine years after the Powell speech a group of Asian immigrants from East Africa were involved in a bitter strike at the Grunwick plant in north London. Their mass pickets received support from the London dockers, along with other groups like newspaper printers and Yorkshire miners as they resisted police attacks. It showed the existence of a very different tradition to that extolled by those who claim the “white working class” has “lost its culture”.

It was that tradition which helped defeat the Nazi National Front with the Anti Nazi League carnivals and battles of the late 1970s – which will be celebrated in Victoria Park on 27 April.

For more on the Love Music Hate Racism carnival see the carnival website.

A disproportionate number of deaths 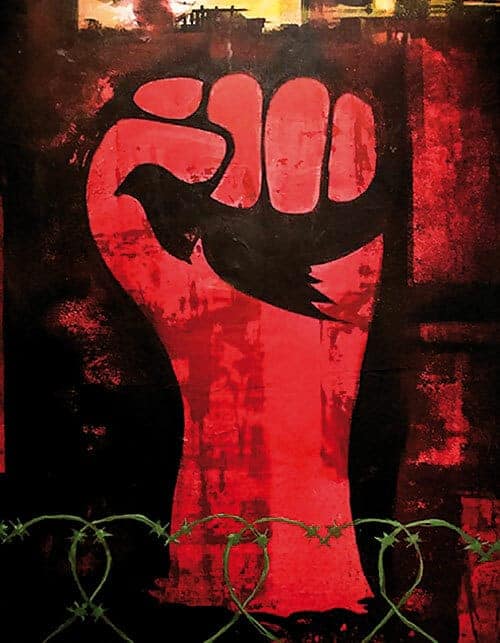 Resist the racist offensive against Muslims