The Worst is Yet to Come?

One year on from the bombing of Afghanistan and you would assume from the spin emanating from Downing Street and the White House that life had returned to normal. The first postwar British tourists even departed recently for a ten-day sightseeing tour of Kabul, Herat, Bamian and Mazar-e-Sharif. But don’t go booking your summer holiday in Kandahar just yet.

More than 10,000 tonnes of bombs have fallen on Afghanistan since 11 September–half of what fell on London in the Blitz. The UN estimates there are 14,000 highly volatile cluster bomblets littered across vast areas of Afghanistan. The unexploded bombs are yellow soda-can sized objects, very similar to the yellow food packets dropped by the US. According to Oxfam there are some 50 to 100 victims of landmines and unexploded ordnance every week.

Humanitarian aid of $4.8 billion was promised by the west in January. This amounts to a mere $225 for every Afghan. But even this paltry amount has not yet been released. The Afghan government reports that only $560 million has been disbursed and only $90 million has been given directly to the government to support its operations. In August, Bush refused to release additional funds of $174 million approved by Congress. Basic necessities, such as schools, hospitals, roads, electricity, even clean water (only 23 percent have access), are missing.

The problems facing the government are being exacerbated by the return of refugees. During the war hundreds of thousands fled the country. Even more are now returning. The UN High Commission for Refugees estimates that 2 million have returned from Pakistan and Iran (one of the fastest population transfers ever witnessed). The World Food Programme (WFP), which supplies most of the emergency wheat stocks, has already reported major breakdowns in its ‘food pipeline’. Moreover, the situation has deteriorated since the US started its bombing. The WFP states that 12 months ago the figure for Afghans ‘highly vulnerable’ to food shortages was just over 5 million. In August 2002 this figure had reached 6 million.

Despite all these economic problems, we are told that there are more personal freedoms, especially for women. After all Cherie Blair donned her headscarf and pleaded with us about the necessity of war to free the women of Afghanistan. However, for the vast majority little has changed. Only a third of children have access to schooling, and of this number only 3 percent are girls. The sexual policing previously implemented by the Taliban’s Ministry for the Promotion of Virtue and Prevention of Vice still thrives. The Women’s Affairs Minister, Dr Sima Samar, was conveniently disposed of and had charges of blasphemy brought against her. Neither has there been a relaxation in many of the Taliban’s oppressive laws. Fazul Hadi Shinwari, the newly appointed Chief Justice of the Supreme Court, has made it clear that Sharia punishments including stoning and amputation will be retained. And the burqa still remains.

Presiding over this disastrous state of affairs is the new government headed by President Hamid Karzai. It has little claim to being a democratic government. The ‘loya jirga’, a large tribal council which decided the new government in June, is seen by most Afghans as a sham. Warlords with long histories of human rights abuses have been given prominent roles. Most importantly for the Pashtuns, the loya jirga failed to correct the dominance of the mainly Tajik and Uzbek Northern Alliance. The Pashtuns comprise 50 percent of the Afghan population and have historically ruled the country. This matters more than ever because only in recent years have ethnic divisions played such a dominant role in Afghan politics.

On the surface it may appear that the government is gaining control. There is a new flag and a new currency note. But the new note is yet to be distributed because the Tajiks object to a design that features the shrine of a hero of the Pashtun tribes. More revealing is the violence aimed at its ministers. Haji Abdul Qadir, one of the new vice-presidents, was recently shot dead. The Afghan interim minister for air transport and tourism was beaten to death at Kabul airport, and in September there was an assassination attempt on Karzai himself. Karzai’s response was to replace his Afghan bodyguards with 46 US special forces troops. Each day this smooth talking, GQesque, Pashtun aristo with his flowing Armani-style robes looks more like a puppet of Washington. The government has been racked by power struggles among the warlords. Karzai does not control any cities outside of Kabul. Jalalabad, Kandahar, Herat and Mazar-e-Sharif are in the hands of others who owe him nominal allegiance. The US risks exaggerating the rivalry between the warlords. They have provided them with new weaponry which is now being used to settle long disputes.

Nothing has exposed the weakness of central government more than the futile attempts to ban opium production and its refined yield, heroin. Under the Taliban the production of opium was virtually eradicated. The country is now set to reclaim its title of being the largest heroin supplier in the world. According to a UN crop survey, opium production will be 3,400 tons this year, compared to just 185 tons in 2001.

In Afghanistan today there are almost daily reports of rocket attacks, including those aimed at US bases. Although they have caused few injuries, the attacks are becoming more bold. As Dan Pleasch wrote recently in the Observer, ‘Like the Soviets before them, the US may find that its first year in Afghanistan will be its best.’ Even Mohammad Khan Gulbaz, a senior official representing the Afghan government, is frustrated: ‘The Americans are not doing well. If this carries on they will begin to seem like the Russians.’

Even the former Afghan prime minister, the Islamist mujahadeen warlord Gulbuddin Hekmatyar, has joined the fray and is now being hunted by US troops. Hekmatyar, who was funded by the US in the war against the Soviets, is calling for a Jihad against his former paymasters. There is a fear that he may join forces with the Taliban and Al Qaida. ‘Everything is going wrong in Afghanistan and we are moving towards a division of the country,’ said Salman Ahmad, a retired Pakistani intelligence colonel. ‘For 250 years the Tajiks have not been in power and now for the past ten months they have put them in Kabul. Everything is going against history and culture.’

In a country racked by war and poverty, there are many still ready to pick up guns. Bush and Blair’s promises of peace and prosperity are about as useful as one of the yellow packages dropped by US jets. Is it a food parcel or a cluster bomblet? It looks remarkably like the latter.

Iraq: A Year to Remember

Syria: intervention only sows the seeds of further chaos 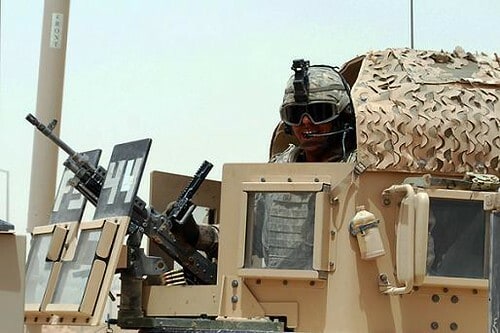