Pedro Almodóvar began his film-making career as a new Spanish society took shape at the end of dictator Franco’s rule. During the 1980s transition period to democracy the politically disenchanted people found a voice in the new cultural movement, movida. Hedonistic and anarchic, it had a strong impact on its followers and Almodóvar’s future work. Bad Education is set against the backdrop of the movida in Madrid, where we meet Enrique Goded, a young, successful film director.

In search of a new script, Enrique finds the perfect story when his childhood love, Ignacio Rodríguez, reappears after 16 years and hands over The Visit. Enrique’s curiosity is awoken by the script but he is hesitant towards Ignacio – partly because his features have changed since their last encounter.

As Enrique begins to read The Visit, his early experiences at convent boarding school during the era of Franco’s National Catholicism are unravelled. Innocent young boys dressed in white cloaks sing with beautiful, serene voices in the choir, their music expressing despair at being guarded by priests draped in black cassocks. Amazing shots of rural Spain painted in sepia brown and ochre are perfectly balanced against a scene where the boys frolic in a cool river. Behind the scenic harmony, shadows of patrolling guardians are ever present.

The state church not only controlled secondary education but also shaped the legal system around its dogmas. Divorce was forbidden and adultery a crime. In The Visit, however, Father Manolo’s sexual endeavours with the young schoolboys are excused by the clergy’s statutes. The Visit tells how the love developing between Enrique and Ignacio is interrupted by Father Manolo who, favouring Ignacio over all boys, expels Enrique and puts an end to their playful romance.

Enrique is keen to film the script of his own childhood. But still not convinced about Ignacio, he tracks down his friend’s past and stumbles upon the truth – the real Ignacio died three years previously, after writing The Visit. The man posing as Ignacio is his younger brother Juan, an aspiring actor who wants to play his brother in the film.

Outraged by the lies, Enrique is driven by a desire to punish Juan and keeps the secret concealed. He goes ahead with the film, letting Juan step into the role of the adult Ignacio, who returns to the monastic school as the vibrant transvestite Zahara. Wearing a blazing green dress and a platinum blonde wig, Gael García Bernal (from Amores Perros) superbly delivers the role of Zahara, who blackmails Father Manolo for the price of a sex change.

In line with the film noir genre, the femme fatale struggles to break away from compulsory masculinity in a destructive, murderous passion where tragedy leads the narrative forward brilliantly. The plot shows an obscure, morbid, dysfunctional world where the search for personal identity also translates to the society at large – the people looking for a new Spain.

Always considered apolitical, Almodóvar now speaks out on Spanish politics – opposing the Iraq war and questioning the Popular Party for its handling of the Madrid bombings (for which it threatened to sue him). Bad Education is not a wholly autobiographical film, although based on Almodóvar’s memories of Catholic education, schoolfriends and the relationship between pupils and teachers. The film is an excellent critique of Catholicism in a fascist system, and it deals scrupulously with clerical hypocrisy.

It Remains to Conquer All 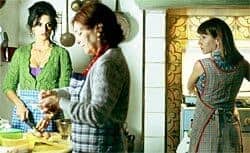 Volver: Almodóvar returning to the start