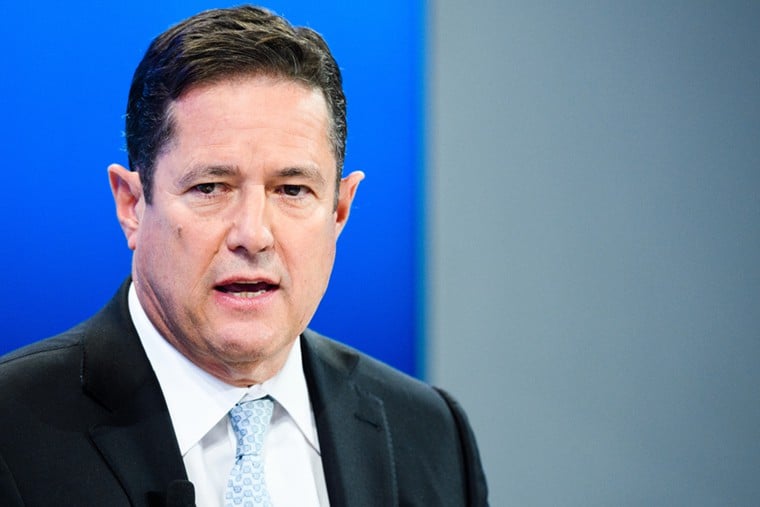 Barclays bank is under pressure over the £2.4 million it handed to departing chief executive Jes Staley.

He resigned recently ­following a probe into his past ties to convicted sex offender Jeffrey Epstein.

Staley intends to ­contest the preliminary conclusions of the UK regulatory investigation.

This examined whether he had mischaracterised his relationship with Epstein as purely professional.

The full report by the Financial Conduct Authority and Prudential Regulation Authority has not yet been published.

The Financial Times ­newspaper has reported that when he worked at JPMorgan Chase several years ago, Staley exchanged 1,200 emails with Epstein over a four-year period, with content that included unexplained terms such as “snow white”.

Epstein died in prison in 2019 while awaiting trial on charges that he sex-trafficked underage girls.

Staley visited Epstein while he was serving a prison sentence in Florida in 2009 for procuring a child for prostitution and soliciting a prostitute.

A lawyer for Staley told the Financial Times last week that he “had no involvement in any of the alleged crimes committed by Mr Epstein, and code words were never used by Mr Staley in any communications with Mr Epstein, ever”.

After he resigned, the Barclays board decided to allow Staley to retain £2.4 million in fixed pay and £120,000 pension entitlement for this year, as well as “repatriation costs to the US”.

The board has made no decision on Staley’s 2021 bonus.

He also owns 17.1 ­million Barclays shares, which at the current price are worth £33.5 million.

The number of stop and searches carried out by police in England and Wales has risen by 24 percent to almost 700,000 in a single year. Cops used the tactic on the equivalent of one in five male minority ethnic teenagers. Use of the racist powers increased dramatically over the period covering lockdowns, rising to 695,009 instances, according to the Home Office.

It states that black, Asian and minority ethnic males aged 15-19 were searched 208 times for every 1,000 people. The proportion that resulted in an arrest fell from 13 percent to 11 percent.

Parliament’s sleaze watchdog has ruled that Boris Johnson does not need to reveal the cost of his family holiday in a plush Marbella villa funded by the millionaire minister Zac Goldsmith. Kathryn Stone, the parliamentary standards commissioner, has decided that the freebie does not need to be declared in the MPs’ register of interests.

The profits of a small family furniture business in Nottingham rocketed by 4,700 percent after former health secretary Matt Hancock helped it land a £29 million government contract for PPE.

It was given the contract to supply surgical gowns after being referred to the fast-track “VIP lane” by Hancock in May 2020.

A year later that figure had grown to £10.2 million.

Hancock helped in the process of securing work for four separate firms, including Monarch.

Until the pandemic, Monarch—also known as Monarch Educational Furniture—does not appear to have any experience of PPE.

In the 2020 accounts lodged with Companies House, it is noted, “During the year the company had the opportunity to diversify, due to the Covid pandemic, which involved several different contracts utilising current suppliers.

This is the reason for the significant increase in turnover as shown above.”

The Hopkins bought their home for £1.1 million in cash without the requirement for a mortgage in March this year.

Countries are losing almost half a trillion dollars through tax abuse by multinationals and the super-rich. That’s enough to fully vaccinate the global population against Covid-19 three times over, a report has said.

Research by tax campaigners found that estimated losses had risen from £320 billion last year to £359 billion in 2021.

Britain alone is responsible for almost 40 percent of the total.

Britain facilitates abuse and evasion through a network made up of British overseas territories and the City of London, the report said. The State of Tax Justice 2021 said £230 billion of the total sum was the result of cross-border corporate tax abuse by multinational corporations and £128 billion offshore tax evasion by wealthy individuals.

Miroslav Palansky, a data scientist for the authors, said the figures represented “the tip of the iceberg” and that actual losses from tax abuse were much higher.

….but its funding a boom in private jets

The super-rich have handed a boom to suppliers of private jets. More than 4.2 million private jet flights have taken place this year, according to aviation data provider WingX, a record number.

In the first week of November they were up 54 percent on the same period last year, and up 16 percent on 2019. Flexjet’s chief executive “pretty much spent the last nine months shopping for aircraft”, said the fractional ownership company’s European managing director Marine Eugene.

Demand is so high that Flexjet has stopped taking on new customers for its entry-level Jet Card programme.

So has NetJets, which has reported the highest demand for flying in its near 60-year history and is investing about £2.1 billion in 100 new aircraft.

One recent analysis found that a passenger travelling in a private aircraft emits around four to 15 times the emissions of an economy class air passenger. They emit between 75 and 250 times the CO2 of a comparable high-speed rail journey.

‘We have to be careful. We’re dealing with human beings who have families’

‘Far too many women are asking themselves if the police are on their side in tackling violence against them. And if they can trust us to help them’

Behind every great fortune is a great crime

A word from our sponsors

The super-rich who think war is a game