Bosses get 180 times more in wages than workers do

The pay gap between bosses and workers has trebled in the last 20 years. Fat cats in the top hundred companies earn 180 times as much as the average worker.

Chief executives’ average salaries rose by £600,000 to £4.7 million last year, according to the High Pay Centre.

Take Sir Martin Sorrell, of the advertising giant WPP. His total package was worth almost £30 million.

In the 1980s bosses grabbed around 20 times the pay of the average worker in Britain.

Young adults have “borne the brunt of the recession” with their wages and job chances hit far harder than older generations.

By contrast over the same period, those aged 31 to 59 saw income fall by 7 percent, pay by 6 percent and employment remain stable.

Average pay in the UK is £26,500, according to the Office for National Statistics.

David Cameron is pumping £1.1 billion into drones and other high-tech surveillance kit to tackle “unseen enemies”.

The prime minister argued it was a “national necessity” as Britain could not “defend the realm from the white cliffs of Dover”.

Though what cliffs have ever done to anyone is unclear. As they used to say,  beyond here there be dragons and drones.

The recession must be a distant memory for the esteemed members of the press at least. The prime minister’s summer drinks party for political correspondents served smoked salmon canapes that were topped with caviar. No effect on the reports they produce of course.

The Tories’ latest entirely non-racist wheeze is that people from outside the European Union who seek NHS help are to be charged 150 percent of the cost.

The move is to be rolled out in a bid to deter so-called “health tourism”.

But if Barack Obama feels a bit peaky during the Nato summit in Wales in September and needs to see a GP, he can rest assured that we will pick up the bill.

The Welsh health minister has enacted powers to allow for heads of state and their officials coming to the summit in Newport to receive free emergency treatment on the NHS.

Police officers will be disciplined if they fail to be polite to the public.

A new 10-point code of ethics, to be published this week, is designed to rebuild trust in truncheons.

Officers will be required to show “courtesy and respect”.

They are to be advised against turning up for work “unfit or impaired for duty as a result of drinking alcohol”.

They shouldn’t use drugs or have sex while on duty.

Good the code cleared that up.

Labour dinner is a match for Tories

We fear Labour may be picking up the wrong idea from our stories.

We previously covered the party of millionaires to raise funds for the Tory party.

So we were shocked to see Labour had their own rich fundraising dinner last week.

The event’s auction saw a chance to have your voicemail message recorded by actor Patrick Stewart go for a £1,000.

Guests also had the opportunity to buy a copy of the 1997 Labour manifesto, signed by Tony Blair, Mandelson and the other Miliband brother, bidding starting at £2,000.

Grayson Perry donated a ceramic pig, emblazoned with the slogan ‘Vote Labour’, which went for £42,000. A game of football with Ed Balls went for £24,000. Art by Mark Wallinger and Nicola Green went for £12,000 each.

PEOPLE living next to the Glasgow Commonwealth Games site were told, “Move your cars in the next hour or you won’t get them back until September”.

Angry residents in Dalmarnock were rudely awakened at 8.40am last week and informed access to their street was being blocked off for the next 10 weeks.

They were told, “If you don’t move your car right now then you won’t get it back until after the games.” 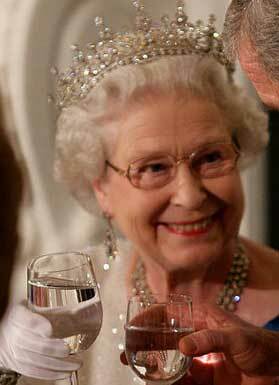