It’s no secret that government departments are feeling the strain after years of austerity. But it’s come to something when George Osborne can’t even draw up a new plan for cuts without help.

It asked them to identify new things to cut. That is, to “share with us your ideas for how to get more for less.“

The winning suggestions in what the Daily Telegraph newspaper called the “Dragon’s Den-style” consultation could form part of Osborne’s spending review.

Perhaps this crowdsourcing of cuts will free him to concentrate on his other favourite activity—selling off state assets to his rich pals.

Osborne reaffirmed plans for a record-breaking privatisation drive, much bigger than Margaret Thatcher’s selloff of utilities in 1991.

The first slice of bailed out bank RBS will kick off a £32 billion wave of privatisations. The last state-owned chunk of Royal Mail is on the auction block next.

The letter asks, “If you think there is a better way to do things, we want to know.”

Most public sector workers do know a better way to do things—stopping cuts and privatisation to put people before profits.

You’d think it would be all the rage to have pictures of sieg heiling Royals these days.

But photographs showing the Duke of Windsor sieg heiling in Germany in 1937 failed to sell at an auction last week.

The Duke was visiting at the invitation of Hitler at the time. The highest bid for the pictures was £1,800—below the reserve price.

While migrants die trying to escape the jungle in Calais much of the media got more upset about a dead lion. But for some the mourning was also a chance to cash in.

Karen Anderson, an animal communicator, revealed she had “connected” with Cecil after his untimely death.

“I was moved to tears to hear his words,” she gushed.

Cecil urged people to “Raise your vibration and allow this energy to move us forward”.

Karen can help others talk to animals, living or dead, for a price. For just $75 she will talk to up to two animals for 15 minutes.

Gold plating firm Goldgenie is hoping to rake in the lion’s share of Cecil cash-ins with its memorial HTC One M9 phone cover.

Troublemaker wonders whether Cecil himself had a darker side, however.

Just how does a lion in Zimbabwe get named after its old murderous racist dictator Cecil Rhodes?

Many women will be familiar with being called “bossy” if they are deemed to be too confident.

But Tesco has taken this to another level. It is replacing the “bossy” female voice on its self-service tills.

Now a “friendlier” male voice will tell customers they packed their bags wrong. Tesco said the sex of the voice “was not our main consideration”.

Soon after, he named ten life peers in his shadow cabinet.

They included Baroness Bonham-Carter of Yarnbury, who comes from a family with three successive generations of peerage.

To be fair, though, the Lib Dem leader’s not exactly shuffling with a full deck.

But 70 years on his Tory son Toby has been kicked out of Labour.

He admitted joining to vote for Jeremy Corbyn, who he hoped would “consign Labour to electoral oblivion”.

Harriet Harman may be right to doubt Young’s leadership choices, however. His free school has had to find three new headmasters in three years.

On your marks… get set… boo

George Osborne went off to the Tour de France to appear on the podium with top athlete Chris Froome.

He was dropped off by his driver outside the Team Sky base, where he was roundly booed.

He looked a bit shocked, made some bizarre driving gesture, and was booed some more before quickly scuttling off to sit with the French politicians.

Troublemaker provides a helpful guide to some of the current members of the House of Lords with criminal convictions.

The cops got tough on drugs last week. They sacked PC Kirk Van Niekerk who had been caught smoking cannabis in his marked patrol car.

He was supposed to be investigating a missing persons inquiry at the time. 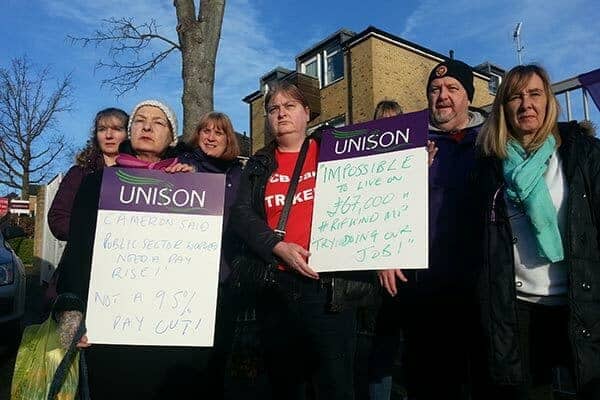 Tory council nightmare to boost robbery by the rich